A Fish Out Of Water 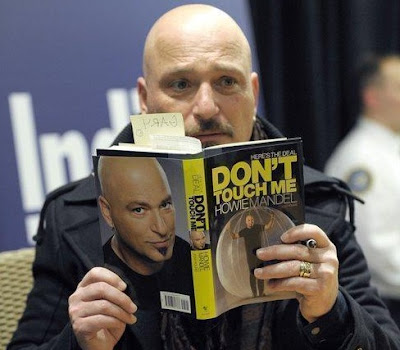 56 year-old Canadian comedian and TV show host Howie Mandel will host the Sprint Cup Awards on Friday. Mandel will lead NASCAR through a completely scripted sequence of events that will once again play to an empty stage. The Sprint Cup Series banquets held in Las Vegas have been a bust.

The participants in the festivities will depart from the Concord and Charlotte, NC airports and fly the 1900 miles to Nevada. It would be much easier if they just drove downtown. Charlotte is home to the NASCAR Hall of Fame and is currently working very hard to revitalize itself. The NASCAR Plaza and the Charlotte Convention Center are two key pieces of that puzzle.

While a move away from New York City in 2009 was much needed, the Las Vegas destination has not offered the kind of high-profile post-season platform the sport has been seeking. This year, some of the other functions taking place in Las Vegas the same day as Friday's banquet include a national Chiropractors convention, a meeting of certified public accountants and ambulance company owners from across the country looking at new vehicles.

Click here for the website of the Charlotte Convention Center. Right on the front page it promotes the Convention Center as being adjacent to the NASCAR Hall of Fame. It seems ironic that this association is part of a pitch to attract business conventions to the area, but has so far failed to lure NASCAR's own end-of-season function to the facility.

Several cities were in the final competition for the NASCAR Hall of Fame. One key reason Charlotte was able to close the deal was the promise of a new forty thousand square foot addition to the existing convention center space. The new ballroom was built as a part of the Hall of Fame. The idea was to make the Hall a unique attraction for convention business from around the country.

Click here for a map of the downtown Charlotte convention facilities that include the Hall of Fame. The idea is to make the entire complex available to larger scale conventions who have flexible facility needs. That would seem to fit the very definition of NASCAR's post-season requirements.

In addition to the actual Sprint Cup Series banquet, the current post-season function is spread over several days and contains several different events. Some of these wind-up being lost in the shuffle. One untapped resource is the National Motorsports Press Association Myers Brothers Award Luncheon. This informal funtion offers candid and sometimes emotional comments from a wide variety of NASCAR personalities.

There has also been a "Victory Lap" that has morphed from a parade of showcars into a burn-out contest and celebrity ride-a-long for NASCAR journalists. The subsequent informal question and answer session called "NASCAR After The Lap" has become a fan sensation and one of the few times drivers can offer candid comments in an informal setting.

While several of these activities are designed for NASCAR fans, Las Vegas is not. The Charlotte area already offers racing shops and a bevy of NASCAR-related attractions. There is little doubt it the banquet came to town additional fan-friendly events would spring up around the area.

Click here for an Observer story documenting the fact that the Charlotte City Council is debating offering a subsidy to attract a key convention to the city. It's a statement on just how tough it is to get that type of business to come to a market and location like Charlotte. Just what does that say about NASCAR?

The time is right to make a switch and bring NASCAR's post-season activity back to the very city that put its faith in a Hall of Fame for the sport. The move would be good for Charlotte, for NASCAR and for the fan base. Bring the banquet to Charlotte.

We invite your opinion on this topic. Comments may be moderated prior to posting.
Posted by Daly Planet Editor at 7:00 AM 42 comments: