NASCAR Reporters Mix It Up On ESPN2 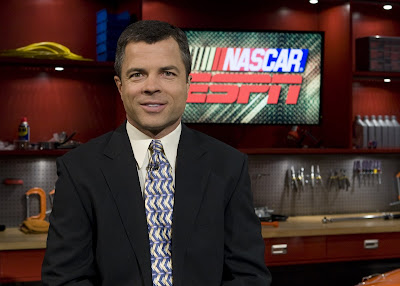 Host Allen Bestwick dove into the Monday "roundtable" version of NASCAR Now with a big smile on his face. For the second time this season, he was hosting three members of the NASCAR media on a special "reporters only" edition.

While the last all-media show was a good start, this episode was exactly what fans wanted to see. Jenna Fryer of the AP, Gary Graves from USA Today and NASCAR Now's own Lead Reporter Marty Smith comprised the panel. From the drop of the green flag, this group was off-and-running for the entire sixty minutes.

The show's early segments focused on individual drivers and their seasons-to-date. Fryer and Smith led a spirited discussion about Kyle Busch, including Smith stating flat-out that Busch was fired from Hendrick Motorsports simply because of his attitude. Fryer reminded the panel she thought Busch might standout at Gibbs Racing long before his dream year began.

Give credit to Allen Bestwick. Even as one of the most experienced sports media personalities in NASCAR, Bestwick limited himself in this program to offering topics and then following-up with good questions. The ability of Bestwick to shine the spotlight on the panelists and let them take center stage is something that did not go un-noticed.

Gary Graves from USA Today proved to be a wonderful addition to the panel. His personality and tone fit-in well with the boundless enthusiasm of both Fryer and Smith. Graves can really put things into perspective and it was clear that Bestwick enjoyed his presence.

Smith and Fryer are an act within themselves, two confident "type A" personalities who have proven to be very entertaining when put in the same TV show. Fryer is now a TV and radio veteran with an in-your-face style that fans either love or hate. Smith likes to have the last word, and waits to comment on the opinions of others.

Bestwick ran the panel through a wide variety of topics, but steered clear of several sticky issues including Mauricia Grant, the declining number of car and truck race entries and the sponsorship pull-back of GM. Granted, there were a lot of issues on the table, but the ones left there after the show was over were big.

The panelists were allowed to read a final thought from the teleprompter and they offered some good topics. Graves was especially effective with his comments on the COT. Bestwick threw-in his personal comments about Indy, perhaps giving us all a clue that he has never paid his own hotel bill on The Brickyard 400 weekend.

NASCAR Now has hit on a formula this season that has vaulted this daily TV series from the cellar to the penthouse. Bestwick has proven to be the master at handling the various personalities provided to him and has worked hard to make every show interesting. Both of the "media" theme shows have worked, so perhaps we will see some special editions of this show with NASCAR reporters again before the season is over.

The Daly Planet welcomes comments from readers. Simply click on the COMMENTS button below and follow the easy instructions. The rules for posting are located on the right side of the main page. Thank you for taking the time to stop by.
Posted by Daly Planet Editor at 4:28 PM 22 comments: