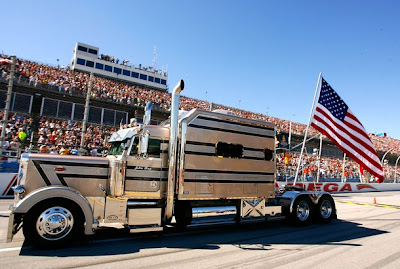 This week it's Rusty Wallace on vacation. Allen Bestwick will host the infield pit studio with Dale Jarrett and Brad Daugherty alongside. Jarrett will then move to the TV booth and work the race with Marty Reid and Andy Petree. Pit reporters are Dr. Jerry Punch, Jamie Little, Dave Burns and Vince Welch.

ESPN has added Hendrick crew chief Chad Knaus as an in-studio analyst for this telecast. The network is searching for something that can add an element of interest for viewers since the series once again this season is dominated by Cup drivers.

Talladega is still recovering from some severe weather yesterday that shook up a lot of folks. The Friday ARCA race was run at 9AM and Sprint Cup Series qualifying is just finishing up.

ESPN continues to use the Sprint Cup Series cross-over drivers almost exclusively for interviews and information. Despite NASCAR's attempt to develop the credibility of some Nationwide Series regulars, ESPN simply wants the big names on TV.

Talladega is a huge track and TV has plenty of options in covering the actual racing. In big packs, in-car cameras are effective but only for a short time as the overall perspective is lost. Low angle speed shots work to establish the intensity, while aerial shots are great at the runs down the backstretch with cars jockeying for positions.

This post will serve to host your comments about the Nationwide Series race from Talladega on ESPN2. To add your TV-related comments, just click on the comments button below. Thanks for stopping by.