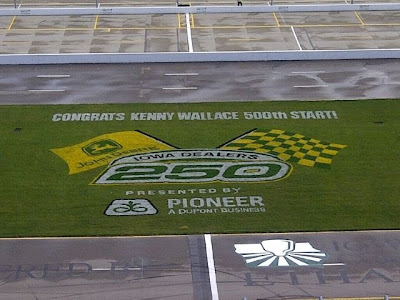 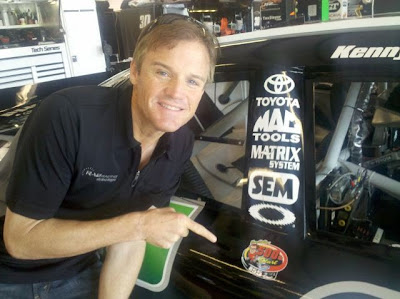 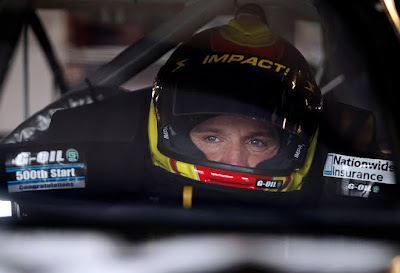 The good news is that the Iowa race is a stand-alone weekend for the Nationwide Series racers. Away from the hustle and bustle of Charlotte, the series regulars are ready to race on broadcast TV to a much larger crowd than normal. The bad news is that All-Star race winner Carl Edwards boarded his plane and flew to Iowa for today's race.

Marty Reid is off this weekend as he preps for the Indy 500 telecast on ABC next week. Allen Bestwick is filling-in and will be joined by Dale Jarrett and Andy Petree. This trio often presents a much more cohesive on-air presence than with Reid in the mix. Bestwick's knowledge of the sport is the difference.

Nicole Briscoe is not happy about being away from her IndyCar husband Ryan, but she is in Iowa and will host the NASCAR Countdown show from the Infield Pit Studio. Rusty Wallace has other duties this weekend, as he is the designer and partial owner of the Iowa facility. Jarrett and Brad Daugherty will join Briscoe on the pre-race show.

One story of this race is the fact that Kenny Wallace is making his 500th NASCAR start. Wallace is one of the series regulars who is rarely heard from once the green flag drops. This series is the playground of the Sprint Cup Series drivers who bring superior funding, equipment and experience.

This should also be an opportunity for ESPN's production team to respond to Bestwick's presence and present the race with a broader perspective. There are some diverse stories to tell, even if Edwards and friends are running away with the race.

This post will serve to host your comments on the ABC production of the Nationwide Series race from Iowa Speedway. To add your TV-related comments, just click on the comments button below. This is a family-friendly website, please keep that in mind when posting. Thank you for taking the time to stop by The Daly Planet.