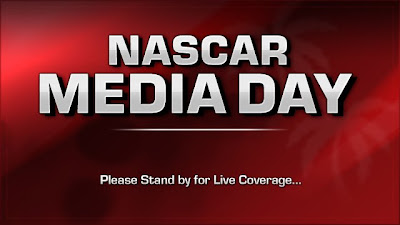 Let's face facts. The success or failure of NASCAR this season is going to be due in large part to the on-air efforts of ESPN and SPEED. NASCAR's other TV partners like Showtime, TNT and FOX focus only on promoting their own programming for a variety of reasons.

It's up to SPEED and ESPN to do the heavy lifting and this might be the first year that both of those companies got the message. Aside from offering solid weekday news shows, another sign that things are changing is this season's television coverage of media day at Daytona.

On Thursday over fifty drivers from all three national touring series will shuffle through media interviews. It might seem like a boring exercise, but it really is a focused media event. National TV, Sirius radio, online video and tons of social media content will flow from Daytona for an entire day.

Content is king these days and the off-season has not been kind. This is an opportunity for drivers to escape the politics of the recent media tour and engage in some interviews specific to Daytona and of a more personal nature. It's a very different environment from the shops back home.

ESPNEWS is set to offer three hours of live coverage from noon to 3PM ET. It will be Mike Massaro and Nicole Briscoe co-hosting with Ricky Craven providing analysis. This is a great opportunity to get some quality national TV time, especially for some of the Nationwide drivers since ESPN2 televises that entire series. Massaro will then be back at 5PM on ESPN2 with a full version of NASCAR Now.

As we have suggested for several years, ESPNEWS could play a key role in helping the sport this season by integrating NASCAR content into the mainstream sports reporting and highlights. When NASCAR Now is preempted, ESPNEWS is the perfect place for the show to air.

SPEED is going to edit highlights of interviews into a special that will air at 7PM ET. The network has been good at exposing the sport at a later hour when more viewers are home and this timeslot is normally used for the popular Race Hub series. SPEED's new NASCAR show called The Ten will follow.

Click here for the direct link to NASCAR.com's online streaming webcast of media day. This presentation is set to begin at 8AM ET and run the full length of the day until 4PM. Marty Snyder, Matt Yocum, Lindsay Czarniak and Larry McReynolds will be handling the hosting duties for the NASCAR.com team.

Pushing more content online is going to be huge this season, whether it is through NASCAR.com or additional media partner websites. After the success of SPEED.com's efforts at the recent Daytona test, it should be interesting to see just how NASCAR.com does with this daylong production.

Finally, Sirius/XM NASCAR Channel 128 will be on-site in Daytona and on the air starting with The Morning Drive program at 7AM. Sirius and NASCAR would get a lot more bang for their buck if the Sirius 128 signal was made available for online streaming as well. Hopefully, this impasse between several parties can be solved down the road.

2011 Media Day in a year that is going to be dominated by social media means only one thing. NASCAR fans will be swarming Facebook and Twitter on Thursday for videos, pictures and interactive conversations with personalities in the sport and the media members who cover them.

All of this might just come together in a brand new way as the interactive synergy of today's online media merges with NASCAR's existing television partners. It should be interesting to watch the different media outlets offer their own unique approach to this content.

This post will host your comments on NASCAR Media Day 2011. To add your opinion, just click on the comments button below. This is a family-friendly website, please keep that in mind when posting. Thanks for taking the time to stop by The Daly Planet.