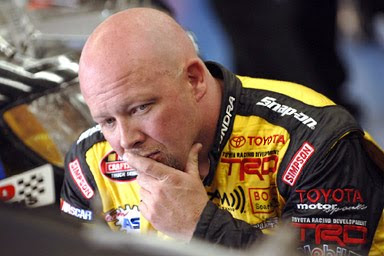 It's a little over sixteen hours and a tad over one thousand miles to reach Iowa Speedway from the Mooresville, NC area. This weekend, while the Sprint Cup and Nationwide Series are in New Hampshire, the Camping World Truck Series heads to Iowa.

We mentioned just last week that the truck series is now a ragtag bunch with only a handful of top teams and drivers. On Tuesday defending series champion Todd Bodine, pictured above, confirmed that his team will be unable to go to Iowa due to the lack of sponsorship.

Rookie Johanna Long has also withdrawn from the race to leave a current field of 31 trucks. It's a guessing game as to just how many of those entries are there to actually race. There are no Sprint Cup Series cross-over drivers this weekend, so the field will be headlined by several "regulars."

The loss of Bodine is rough. The Onion's bald head, bright smile and lollipop-sucking personality makes for a fun TV interview. His driving makes for some fun TV viewing. In the same way that personalities like Johnny Benson, Ted Musgrave and Rick Crawford have faded from the series, the loss of Bodine this weekend really hurts what many call "the show."

There have to be some "career men" mixed-in with the current minor leaguers like Austin Dillon and Cole Whitt who will certainly be moving up the ladder soon and leaving the trucks far behind. This weekend, only Ron Hornaday really fits that bill.

The other drivers are mostly in transition with some trying to return to the big leagues while others are just happy to be racing and getting a paycheck in these very tough times.

SPEED has the race live at 8PM ET on Saturday night. Krista Voda hosts the pre-race show at 7:30PM. Rick Allen and Phil Parsons will call the race with Hermie Sadler and Ray Dunlap on pit road. This week in Iowa, even the TV staff is smaller in number.

The great thing about the trucks on SPEED has been the simplicity. This weekend, it may be that new names take advantage of this stand-alone race and emerge with good performances. Having that opportunity on national TV in primetime on a Saturday night is not a bad thing.

The trucks will be racing 200 laps around the .875 track in Iowa. As many of us who watched the trucks develop over the years can attest, this size track is exactly what allows the series to shine.

The TV challenge for SPEED is to tell the story as it happens without NASCAR spin. If ten trucks start-and-park, then show it and say it. If no trucks park and everyone is racing the distance, point it out for the viewers.

When one door closes in racing another eventually opens. Even with Bodine gone and no Sprint Cup series drivers in the field, Iowa could be a race full of surprises and fresh opportunities for new faces.

We welcome your opinion on this topic. To add your comment, just click on the comments button below.