Your Turn: NASCAR on FOX From Atlanta 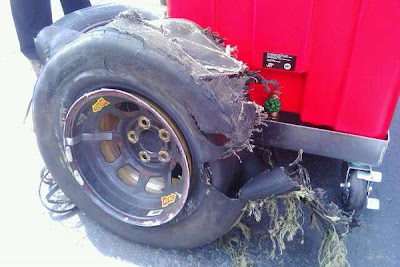 Chris Myers, Darrell Waltrip and Jeff Hammond started the pre-race show from the Hollywood Hotel. The pre-race show had several features including an interview conducted by Waltrip. The Slice of Pizzi feature had Dale Earnhardt Jr. as the guest.

Digger popped back up this week early on in the race with animation and then faded before the halfway point. In-car camera use was again a big topic as was the tight shots of two cars that seemed to dominate the coverage at times.

Pictured above is Joey Logano's tire that was just one of the many tire issues in the event. FOX originally blamed the problems on the camber of the wheels being used and then continued to try and put the issue in some sort of team context. The Goodyear spokesman, who was at the track, was never interviewed.

Several drivers were knocked out of the race, but Carl Edwards was the one selected for an interview. He was shown the replay of his accident in an effort to get him to blame another driver, which he declined. Other drivers out of the race who did not have the potential to generate controversy were never interviewed.

The "Crank it up" feature continued and was inserted at several critical times in the race. The commercial load continued to be the same, but the movie trailers and the movie videos run inside the race were gone. The ads returned to the normal sponsors associated with the sport.

The weather was good and the FOX technical crew had no issues on the air. Fox worked hard to keep the split-screen effect on green flag pitstops and used a lot of pitstop replays. The pit reporters were not significant in the race, with Steve Byrnes contributing the most information.

FOX frames NASCAR very tight, so a significant portion of the race was specific cars shown without a frame of reference to the track or the rest of the field. The final twenty laps were great racing until marred by an ugly incident involving Carl Edwards. The FOX team handled the incident with dignity and let it play-out on the TV screen and the track. Both drivers were interviewed.

On the first restart FOX cut tight and entirely missed the big wreck of the race. It was shown through replays. The finish was exciting and the TV pictures showed the entire field crossing the line.

This post is your opportunity to voice an opinion of the TV coverage by FOX. To add your comment, just click on the comments button below. This is a family-friendly website, please keep that in mind when posting. Thanks for taking the time to stop by.
Posted by Daly Planet Editor at 9:00 AM 56 comments: