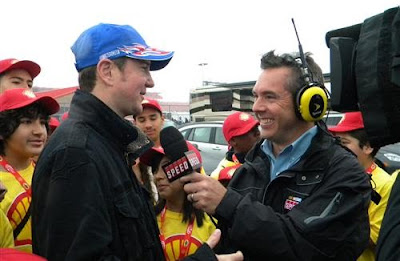 The last big TV change was Allen Bestwick stepping-in to take over the Sprint Cup Series races for ESPN only days before the coverage started. Tuesday, there was another item involving on-air personalities that caught our attention.

This tweet from SPEED's Hermie Sadler shortly before noon: "Bittersweet week for me as I prepare to do my last @racedayonspeed show this Sunday. Been a hell of a lot of fun."

In response, Kyle Petty offered: "You are still the man." Other TV production personalities echoed Petty's comment. It would seem that Sadler is indeed done with RaceDay for good.

Sadler has been working as a reporter on the series alongside Wendy Venturini for quite a while. Like Venturini, Sadler works well in the garage area. His past racing experience and easygoing personality allow him to maneuver through the tangled web of PR reps and high-profile personalities in the Sprint Cup Series.

SPEED also uses Sadler as a pit reporter on the truck series, a field reporter for NASCAR Live and in the TV booth for Nationwide Series practice and qualifying shows. It will be interesting to learn if Sadler is done just on RaceDay or across the board with SPEED.

As the final weekend of racing approaches, let's take a look at some of the things we know about the 2012 line-ups for the NASCAR TV partners in talent and programming.

FOX informed us a while back that Jeff Hammond was out of the Hollywood Hotel next season and driver and current multi-car owner Michael Waltrip was in. Hammond is moving to a "roving reporter" role says the network.

Both Waltrip brothers will become centerpieces in the NASCAR on FOX telecasts. This change resulted from the Waltrips working together on several NASCAR races carried on SPEED earlier in the year. Network execs apparently liked what they saw.

The rest of the NASCAR on FOX team should stay intact. This crew has been around a long time and the personalities and their roles are well defined.

TNT lost infield host Lindsay Czarniak, who moved to ESPN as a studio anchor after the summer race telecasts. The network still needs to fill that position, but the remainder of the crew including pit road newcomer Chris Neville should return.

It should be very interesting to see what ESPN does with Marty Reid. After being moved off the Sprint Cup Series races, Reid was left with the Nationwide Series and a handful of IndyCar races. When ESPN cranks back up for year six, it will probably be Bestwick in the TV booth at Daytona. Reid has a long history in both IndyCar and the NHRA. We should know how this issue shakes out after Christmas.

While the core of ESPN's team is set to return, the odd twist is Carl Edwards. Next season Edwards is rumored to be hanging-up his driving shoes on the Nationwide Series side and joining ESPN fulltime to work on the telecasts. His current owner Jack Roush let that cat out of the bag a while back.

As a driver, Edwards would be looking at two familiar faces already in place. Dale Jarrett currently works in the TV booth and Rusty Wallace in the infield studio. Wallace has been re-signed through 2014 and Jarrett is the face of NASCAR on ESPN. In fact, Wallace left the booth to make way for Jarrett several years ago. What slot Edwards might fill will not be disclosed until after Jan. 1.

The heart of SPEED's Camping World Truck Series team is poised to return. Rick Allen, Phil Parsons and Ray Dunlap have been the face of the series for years. Sadler was one of the pit reporters and Waltrip was the third man in the booth. We should know next week if Sadler's RaceDay departure and Waltrip's Hollywood Hotel deal will change things for 2012.

One rumor swirling right now is that NASCAR Now has been cancelled by ESPN. As most fans know, the show was moved from 5PM back to 3PM and the only re-air was cancelled a couple of months ago. ESPN2 has a new afternoon line-up and NASCAR was pushed to the back burner.

Nicole Briscoe lives in the Charlotte area and commutes to Bristol, CT for her hosting duties. Mike Massaro relocated to Connecticut fulltime and Monday show host Allen Bestwick continues to reside in his beloved Rhode Island. That's just the tip of the iceberg.

ESPN has a significant number of reporters and analysts who rely on this series for employment. The show is on six days a week and during the Chase races adds a one-hour wrap up show as well. The loss of this series due to basically logistical on-air issues would be tough for the sport.

Update: Thursday late afternoon ESPN advised that NASCAR Now will be returning for 2012 as a daily show with the same staff. Time of the series airing is not yet known. Good news for NASCAR fans, just need a better timeslot!

Even though SPEED moved RaceHub to 6PM, the network loves the show. Steve Byrnes and Danielle Trotta originate an hour of NASCAR-themed content Monday through Thursday. Almost all of the SPEED and FOX analysts appear and the series is dream for promotion of the network's agenda. Expect that lead duo to return.

It's been a grand experiment seeing Jimmy Spencer in his role as on-air curmudgeon. His RaceHub antics include the awarding of cigars and straight-jackets. His "Kurt Busch Radio Sweetheart" segment is hilarious. The question is, does the new production management team at SPEED feel the same way.

There is no information out about the return of Inside NASCAR on Showtime. This series is said to be under contract for another season, but the show has shrunk to thirty minutes and seems to be all about promoting the profanity on the team radios.

On a non-TV note, veteran reporter Dustin Long of the Landmark Newspaper chain is ending his role as a NASCAR beat writer after this weekend. Long is a past president of the National Motorsports Press Association and has been helpful with our efforts here for years. His company is eliminating his position. We wish him well and hope his next assignment is a great one.

There has been a lot of breaking news this week. Should any new information become available on additional on-air changes, we will update this post.

In the meantime, please feel free to offer your opinions on the personalities and programs listed above. Thanks for taking the time to stop by The Daly Planet.