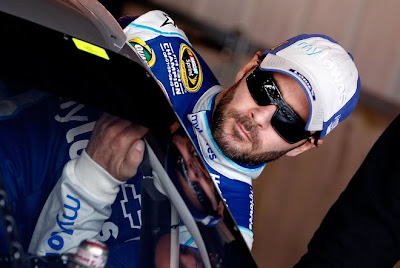 Great fall weather at Martinsville means NASCAR gets an opportunity to put on a good show as the season winds down. The pre-race show on ESPN today is only thirty minutes, but the green flag does not fall until 1:58PM ET.

Russ Wallace, the father of Rusty and Kenny passed away last night after an illness. Kenny was replaced on SPEED's RaceDay by Larry McReynolds. Rusty will not be replaced, but the Infield Pit Studio will host several guests. Nicole Briscoe is hosting with Brad Daugherty alongside.

An interesting Marty Smith interview with driver Brad Kesewloski will air during the Countdown show. Also on the table will be the Chad Knaus pre-race conversation picked up by NASCAR.com's RaceBuddy at Talladega. Jack Roush again this AM denied team orders were in place last week, despite Trevor Bayne saying he was told to leave Jeff Gordon and pick up a Ford late in the race.

Allen Bestwick will call the race with Dale Jarrett and Andy Petree alongside. On pit road are Dave Burns, Mike Massaro, Dr. Jerry Punch and Jamie Little. Vince Welch informed us he is off this weekend as his daughter has a cross-country track meet. Tim Brewer will be in the Tech Garage.

Martinsville is short-track racing defined. It will be impossible for the "hyper-tight" ESPN coverage because there is always a pack racing or something going on. The ability to pick and choose who to cover is gone.

It's a shame that ESPN did not experiment with Nonstop coverage for this entire race. One commercial of three minutes in length under green flag conditions seems like an hour at this track. Instead, only the final half of the event will have the side-by-side commercial format.

NASCAR.com will continue to offer RaceBuddy. This consists of a collection of in-car cameras with two fixed speed shots of the racetrack. Listening to the team radios should be interesting today.

This post will serve to host your comments on the ESPN coverage of the Sprint Cup Series on ESPN. To add your comments, just click on the comments button below. Thanks for taking the time to stop by.