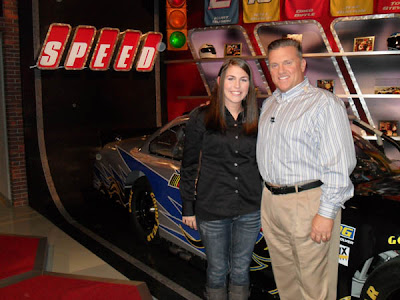 That is 18 year-old Johanna Long shown above with Steve Byrnes after a Race Hub interview. An up and coming driver who has worked her way through the ranks, Long will start 9th tonight in the truck race. There are lots of good stories in this field.

Krista Voda starts the night with The Setup at 8:30PM ET. Ray Dunlap and Adam Alexander are the pit reporters. The race starts shortly after 9PM. Rick Allen, Phil Parsons and Michael Waltrip will call the action.

TMS has just been very fast today with the low temps and the big power the engines have been making. It should get down into the upper 40's during the truck race.

SPEED is coming off perhaps one of the best truck series telecasts in years. Talladega was done right from start to finish and the reviews were outstanding. TMS should give the TV team another opportunity to show what is right with NASCAR TV coverage.

This post will host your comments about the SPEED telecast of the CWTS from TMS. To add your opinion, just click on the comments button below. This is a family-friendly website, please keep that in mind when posting. Thanks for stopping by.

Set It And Forget It: Friday At TMS Is On SPEED 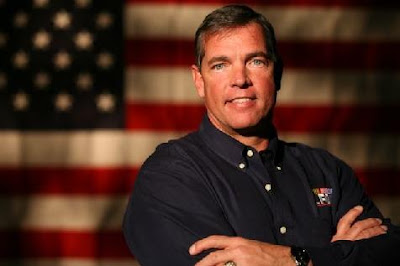 The season is winding down and all three of NASCAR's national touring series are at the Texas Motor Speedway for some high speed action. TV coverage begins on Friday and SPEED has it all.

The day starts at 10AM with Nationwide Series practice. Steve Byrnes will be teamed with Larry McReynolds and Jeff Hammond all day long for coverage.

Ray Dunlap is next with NASCAR Live at 11:30AM. Dunlap will have Phil Parsons, Hermie Sadler and Randy Pemberton working on this show.

After a break for Formula One coverage from Brazil, Steve Byrnes is back at 1:30PM with Nationwide and then Sprint Cup Series practice. Bob Dillner and Wendy Venturini are the reporters.

The first featured telecast is Sprint Cup Series qualifying at 4:30PM ET. This is a big session with a lot on the line for many teams for a wide variety of reasons.

The gang is back together on Trackside at 7PM with Elliott Sadler added to the Byrnes, Hammond and McReynolds trio. Early Thursday evening reporter Jim Utter of thatsracin.com broke the story that Sadler will be leaving the Sprint Cup Series in 2011 and running for the Nationwide Series championship for Kevin Harvick Inc. It should be interesting to hear what Sadler has to say on that issue.

Terry and Bobby Labonte are also guests. So is Steven Turner. He is the powerhouse business executive behind the emerging Turner Motorsports. He purchased Braun Racing and seems set to present a strong multi-team presence in both the trucks and Nationwide Series next season. Justin Allgaier is rumored to be joining that team full time for 2011 as well. Talk about a jam-packed hour!

Trucks are next with the pre-race at 8:30PM and the racing underway shortly after 9PM ET. The SPEED crew are coming off one of the best truck telecasts of the season at Talladega. With Texas always hosting great racing for this series, it may be that the TV gang is peaking at the right time. We will live blog this event.

Nicole Briscoe and the ESPN2 NASCAR Now gang end the night with a midnight ET edition of preview and review. Highlights of the day's action will be mixed with reporting from Shannon Spake and a preview of the Nationwide and Sprint Cup Series races on the weekend.

As we watch SPEED go through the TV day on Friday, please feel free to add your comments about the coverage. Just click on the comments button below. This is a family-friendly website, please keep that in mind when posting. Thanks for stopping by.