Thanks again to Dave and Suzy for letting me stop by the Sirius studios. What a nice group of people. Due to some driver availability issues, I was on a bit early but it was certainly fun.

Monday is a good day for talking TV, mainly because of the clash between Major League Baseball and NASCAR that happened on Saturday night. Viewers of both sports were short-changed, as the Fox gang did not choose to follow many of the practices that are normally done in live program overlap situations.

Spoken as a person who has been in that situation many times before, there is often no easy way out and things tend to happen rather quickly. In this case, good intentions led to both parties walking away with ruffled feathers.

Other topics on the agenda may include TV clearly driving the drug testing agenda while many print reporters steer clear. In addition, viewers are asking why Ray Evernham does not seem to be showing-up on ESPN recently?

The email continues about Fox choosing once again to show only the leader finish, and refusing to comment on that issue. If Mark Martin and Dale Earnhardt Jr. did not deserve to have their final run to the flag shown on live TV, than what the heck do drivers have to do? Winning is only one story of the race, and often it is not the best one.

Thanks for taking the time to read this post, I will update the times as soon as possible on Monday. For those without Sirius, I will post an update on the topics and the comments as well. Thanks again for stopping by, if you want to suggest a topic for Monday, please feel free.
Posted by Daly Planet Editor at 11:24 PM 21 comments:

Schrader vs. Labonte On A Monday TV Match-Up 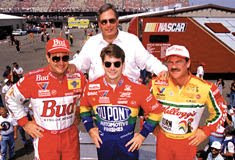 This is going to be an interesting Monday for NASCAR fans who like to watch TV.

Two of NASCAR's key television partners are going to be presenting one hour feature programs covering the same topics and competing for the same fan base. ESPN2 is up first with NASCAR Now at 5:30PM and SPEED follows at 8PM Eastern Time with the brand new This Week In NASCAR.

Both networks are rolling-out a new wrinkle this week with NASCAR Now welcoming Terry Labonte to the "roundtable" and TWIN bringing back viewer favorite Kenny Schrader. This will be the first appearance for both on these respective shows.

Labonte will be joined by Brad Daugherty and Mike Massaro in the ESPN2 studios for a program that will be hosted by Allen Bestwick. This show is going to be fascinating, because on the menu will be drugs and television. Those are two topics not usually discussed.

Since ESPN's Ryan McGee broke the Aaron Fike "racing while high" story, the howl for a new drug testing policy has become louder and louder. A veteran like Labonte should have an interesting take on the subject. Also, it should be interesting to see if ESPN broaches the subject of the delayed start of the race and the on-air mess that NASCAR on Fox viewers had to endure.

Over on SPEED, Steve Byrnes will be hosting the long-awaited return of Kenny Schrader to the Monday evening 8PM timeslot. Gone is Inside NEXTEL Cup and now TWIN features lots of video and features and much less conversation. Joining Schrader on the panel will be his long-time alter ego Michael Waltrip.

Perhaps, Waltrip's recent pro-NASCAR rants on a wide variety of subjects will play a little differently with Schrader on the set. Normally, the other panelists Greg Biffle and Chad Knaus just wince a bit and wait for the end.

Steve Byrnes has faced an uphill battle with this new program, as nothing is more difficult to change than a popular TV series. Just ask Dave Despain. With an off-week for the Cup series, it will be interesting to see if the show format continues to put the preview of the upcoming race before the discussion of the race from Saturday night. Waiting thirty minutes to talk Phoenix is tough to take.

This post will serve to host your comments in advance of these two programs. There will be a full column up after each show for your post-show opinions. To add a comment, just click on the COMMENTS button below and follow the directions.

The rules for posting are located on the right side of the main page, and thanks for taking the time to stop by The Daly Planet.
Posted by Daly Planet Editor at 9:46 PM 11 comments: