Flashback: The Most Painful Dale Junior Interview In TV History 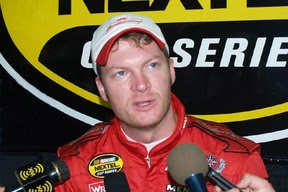 Update 6/27/14: This column was originally published in July of 2007. Just giving our friends at ESPN Motorsports a little trip down memory lane. NASCAR Now has been cancelled after airing at 2am for this season. The network cannot run away from NASCAR fast enough after boasting of its return in 2007. Enjoy a little Junior flashback.

Original column: Dale Earnhardt Junior looked like he was having a long day. He sat patiently in his Sharpie shirt in front of a Sharpie background on what was clearly a Sharpie "satellite media tour." This is the process by which a driver sits in one location and various media outlets interview him while he wears the sponsor's shirt and shows the sponsor logo on TV.

TV folks get to ask questions only if they also agree to allow the driver to mention the sponsor's own agenda, which usually consists of a special promotion. To say the least, its usually not a lot of fun for the driver. Tuesday, it was almost unbearable.

Earlier this season, Sharpie and Junior inked an endorsement deal that resulted in Sharpie releasing a customized Dale Junior black Sharpie aimed at NASCAR fans. They also appear as a sponsor on his NEXTEL Cup car in Bristol, TN. Part of this deal is the fact that Junior must do "appearances" for Sharpie.

Tuesday evening, ESPN's NASCAR Now teased a "feature interview" with Junior. When he finally appeared, show host Erik Kuselias never said where Junior was located, he just kind of "appeared." Viewers immediately noticed the fact that the Budweiser logo and the color red were missing from his attire.

Instead, he wore a Sharpie shirt and appeared in front of a Sharpie background in his mysterious "studio" location. It was pretty easy to tell, something Sharpie was going to be promoted.

Instead of being up-front with viewers and explaining this agenda, NASCAR Now tried to "sell" the fact that this was a "feature interview" with Junior. They somehow believed fans did not see the Sharpie shirt, or the wall with Sharpie logos all over it.

The number one problem for ESPN is that NASCAR fans have a clue. They knew something was up from the start, and the look on Junior's face really gave it away. It was something between being at the dentist and standing in line at the Motor Vehicle Department. This fun-loving and easy-going guy was having absolutely no fun, and it was very clear that the going...was not easy.

The person being interviewed can hear the "network feed" in their earpiece, and to lead into Junior, NASCAR Now ran an embarrassing video package on his decline this season, his possible failure to make the chase, and his leaving DEI. What a nice way to make a person feel welcome to NASCAR Now.

Kuselias introduced Junior as "NASCAR's most popular driver," and then without allowing him to even say hello just laid into him with one of the most bizarre NASCAR questions on network TV in quite some time. Kuselias asked Junior about Indy "if you don't have the engine trouble, could you have won that race?"

After a brief grimace, Junior politely responded "there's no telling, we were in the top five, so we had a shot at it." Wouldn't we all like to know what was actually running through Junior's mind? Either he was thinking that ESPN has no clue to racing or he was holding himself back from the Geico Caveman answer...."what?"

Next up, Kuselias fired off "how confident are you that the eight is going to make The Chase?" What is the only answer for any driver on any team working hard to do their best every race? Junior said "very confident...we are just having bad luck" Patiently, Junior pointed out that the team was running well in the races they did not finish. This was a point omitted by the host.

"How is the fact that you are moving-on impacted the team this season?" was a follow-up from Kuselias. Again, what is the answer when you are talking to the person who is leaving? Should he say everything is a mess and I am to blame? Junior replied that this change was motivation for the DEI gang to show it could send him out on a high note and also prove that they are a top-notch professional team.

As if things could not get any stranger, Kuselias referenced the DEI/Ginn merger, and actually asked Junior that now that Mark Martin is his team mate, "what do you guys talk about?" His assumption was that since Junior and Mark were on different teams, they routinely did not speak to each other.

Veteran NASCAR fans might have had to be helped-up off the floor, as Junior and his late father had known, and grown-up with Mark and his family for over twenty years. "It would be kind of boring I think" said Junior. He was then nice enough to reference for Kuselias his experience with Mark in the Busch Series and the help he received coming up through the ranks.

Kuselias did not get it. These two guys had known each other for a long time. They have already talked about life and racing for many years with each other. In his unrelenting manner, Kuselias asked "what specific things would you focus in on with Mark Martin?" He was referring to "getting info" from Martin before leaving DEI, and presumably, not talking to Martin again as he would no longer be a team mate. How priceless is that question?

Junior took a very deep breath. Then another. "That's kind of a tough situation there" he said about the question. Then, a funny thing happened. As we all have at some time in our life...Junior just made something up. It was about learning Martin's "set-ups" for his cars. If you were a fan, it was a hilarious answer. A guy going to Hendrick needs help with "set-ups." The message could not be sent any clearer. But, if you were ESPN, this was great information.

Then, Junior was gone. No thank you or sign-off, just Kuselias saying that Junior would be back later in the show "to talk more about the news involving you." Does that make any sense? Well, of course it does. Junior had to get in his promo for Sharpie, and after taping the entire interview, NASCAR Now just sliced that part off and kept it for the end of the show.

This way, they could pretend that this had been a "feature interview" with NASCAR Now, and not just another TV interview on the Sharpie "satellite media tour." How low can this bunch get?

Finally, Kuselias said that people at ESPN were showing him their "8" tattoos and asking him if Junior was going to "keep his number." After asking him if he had any news on that, Junior quietly replied "Not really, we don't have any. That's not something that I have any influence on." That is bad news. Apparently, all those Connecticut TV executives with Junior tats will have to wait a little while longer before booking an appointment for "new ink."

Junior then looked relieved when the Sharpie "drive you back to school" initiative was brought-up as ESPN's time wound down. Junior carefully explained this promotion for education and it was, in fact, a great idea. Then, without mentioning Erik's name, Junior was gone.

Several times this year, we have seen drivers on "media tours" appear on NASCAR Now wearing specific sponsor gear, and sitting in an unknown location surrounded by sponsor logos. Each time NASCAR Now has tried to make it appear that the driver was just an interview, when in fact it was a paid media appearance. The trade-off for the "mandatory sponsor TV mention" is that the driver has to answer a couple of questions. This was the case with Junior and Sharpie.

The funny thing is, fans like to hear from Junior. If ESPN had just said where he was, and what he was doing, there would have been no problem. Everyone understands sponsorship, and the cause was a good one. It would have been nice if ESPN had pitched-in and promoted this on their own NASCAR website.

ESPN is now the network covering the NEXTEL Cup Series for the rest of the year. What they seek from fans and viewers is a return to the credibility they had back in the 1980's and 90's. Deception like this on their daily NASCAR show is not going to help that cause. Things need to be explained to viewers for what they really are.

For this program, and the network, to gain any kind of momentum as the NASCAR season hits its peak, there has to be a committment to accountability and honesty. And just maybe, a little less nervous laughter.

The Daly Planet welcomes comments from readers. Simply click on the COMMENTS button below, or email editor@thedalyplanet.tv if you wish not to be published. Thanks again for taking the time to stop by and leave your opinion.
Posted by Daly Planet Editor at 8:53 PM 44 comments: