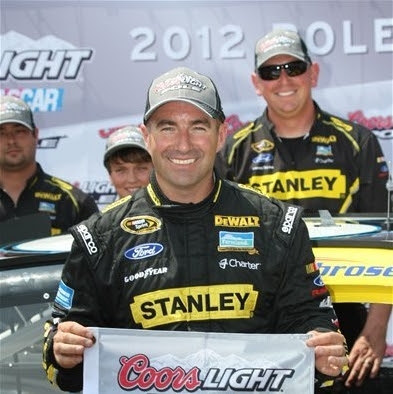 Marcos Ambrose will start on the pole when the Sprint Cup Series returns to the wine country of Northern California. Sonoma is a road course race that has turned into a boxing match over the last few years.

The day starts with NASCAR RaceDay on SPEED at noon ET. Darrell Waltrip will again dispense his wisdom on the panel, filling in for Kyle Petty during the TNT portion of the series. Jeff Hammond joins him, filling in for Larry McReynolds.

TNT takes the air at 2PM Eastern with Adam Alexander hosting the pre-race show. Petty and McReynolds will join him, along with special guest Kyle Busch. The show will also feature an interview with Dale Earnhardt Jr. and another NASCAR generations piece with Ned Jarrett, Bill Elliott and Jimmie Johnson.

Alexander and Petty move upstairs to call the race with Wally Dallenbach Jr. This track has been the scene of some of the worst NASCAR TV production every seen on TNT, but those incidents featured the former TNT announcer Bill Weber. Keep an eye on how the coordination goes between the announcers in the booth, the pit reporters and the infield. If history repeats itself, McReynolds will be alone in the infield with cars literally whizzing by in the background.

The toughest thing about a road course for TV is the inability to use one camera for more than one thing. You can't "Isolate" a camera on a car and follow it around the course. Every camera is simply assigned a turn or straight and repeats over and over again the task of moving back and picking up the next group of cars that come through. It is totally different in every way from working an oval race.

That makes the director's task very tough in terms of trying to follow more than the storyline of the leaders. In the replay area, operators will be pushing buttons and cutting cameras to try to follow a good battle not being shown on the TV screen. Even the pit reporters will be dealing with circumstances of cars pitting as the green comes out, quickly pitting before a full course caution comes out and working pit strategy backwards aiming for a fuel mileage win.

Ultimately, Sonoma can produce beautiful pictures and exciting racing or a disjointed telecast and the kind of mayhem we saw last season. One part is up to the drivers and the other to the NASCAR on TNT telecast team.

We will be on Twitter using the #TDP1 hashtag for live tweets about the TV coverage of the race and any other media topics that may arise. We invite you to join us as we have NASCAR teams, officials and many media personalities involved during the race. This blog will also have a post ready for your comments once the race is over. Hope to see you on Twitter at noon for an afternoon of NASCAR.
Posted by Daly Planet Editor at 12:50 AM 10 comments: