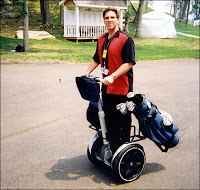 Last week, The Daly Planet celebrated the fact that ESPN had made some significant changes to its NASCAR Now program. Out was Erik Kuselias, and in was ESPN's own Ryan Burr. Race fans were upbeat, and the programs were outstanding.

This week, viewers could not believe that Kuselias was returned to the airwaves on a key week for both the network and NASCAR. The results have been a mess for both parties. On Wednesday, ESPN telecast a special version of this ESPN2 program.

The one hour version of this program began with the "merger mania" that is sweeping the under-funded NASCAR team world. As opposed to Ryan Burr, Kuselias is a "reader" who has no knowledge about the sport, and reads questions "in order" to his reporters. It changes the dynamic of the entire program when the host cannot speak freely about the sport with some authority.

Once again this week, feisty reporter Marty Smith talked over the host and added his feelings as a "tag" to a scripted question from Kuselias. The deer in the headlights look on Kuselias face always tells the tale. Someone has deviated from the script, and this is a big problem. Because Kuselias does not know...anything about NASCAR. This time he got off easy because no one asked him to provide an answer.

Over the past six months, The Daly Planet has referred to NASCAR Now as "bi-polar." This show was no exception. Kuselias was literally screaming from the opening tease throughout the show. Someone obviously told him "more excitement" and he interpreted that directive as "move volume."

Last week, the professional Burr was smooth and calm while delivering news and information at a rapid pace. Its almost tough to believe that this is the same network.

Both Terry Blount and Shannon Spake were put in uncomfortable positions on Wednesday by ESPN. Blount was forced to comment on the possible future contract restrictions that ESPN has decided are now needed for NASCAR drivers.

This has all come about because ESPN discovered that Carl Edwards got his thumb out of joint, literally, in a Late Model race last week. Blount took a deep breath and towed the company line while laughter echoed in the background since drivers are "independent contractors" and racing to most of them is life itself, not an optional behavior to be negotiated. At least he did it with a straight face.

Spake was forced to "hype" the theory that NASCAR events have to be "ranked," which is something that ESPN loves to do. She then was sent on a snipe hunt to ask around about what four NASCAR races are the "majors" of the sport. This feature showed a lot of racing types offering their opinion, and concluded the exact same way it started, with nothing solved.

Instead of the Blount and Spake reports, perhaps ESPN could have told viewers that there are three events this weekend in Indy. Friday night, the fantastic and exciting Craftsman Truck Series will be live on SPEED from O'Reilly Raceway Park. Saturday, the Busch Series takes to the same track live on ESPN2. This might be the best racing of the weekend.

Unfortunately, none of this matters to ESPN even in a one hour preview show on a Wednesday. They are obsessed with NEXTEL Cup, and will not lower themselves to deal with these "lesser" series unless they are forced to do so. It is the height of arrogance that ESPN shuns these two series, and the height of hypocrisy that NASCAR lets them get away with it.

This week, Ryan Burr and co-host Allen Bestwick have been absent on NASCAR Now. As the network leads up to its key NASCAR weekend, the executives have made the conscious decision to use the struggling Erik Kuselias during a week where many new NASCAR fans are being courted by the network.

Following a week of quality programming, NASCAR Now returned to the "screaming hype-fest" viewers have come to know so well. Another one hour special of NASCAR Now on ESPN follows on Thursday. One day out from the Indy on-track activity, it will be very interesting to see who the network chooses to lead the band. Thursday and Friday are the most important NASCAR Now shows of the season to date. We certainly will be watching.

The Daly Planet welcomes comments from readers. Simply click on the COMMENTS button below, or email editor@thedalyplanet.tv if you wish not to be published. Thanks again for taking the time to stop by.
Posted by Daly Planet Editor at 4:59 PM 21 comments:

This season has marked the comeback of one of The Daly Planet's favorite NASCAR TV personalities. Randy Pemberton has battled back from some bad breaks in life to return to a featured role this year with DirecTV's Hot Pass package. In addition, he has made some very spirited appearances with Kyle Petty and John Roberts on SPEED Channel's excellent Tradin' Paint program.

Today, SPEED has announced that they have made an investment in Pemberton by signing him for the remainder of the NASCAR season. The network will feature him on shows like NASCAR Live! and the new series Go or Go Home. SPEED will also allow Pemberton to step into some hosting roles in NASCAR practice and qualifying sessions.

This is a very positive step by SPEED, a network that already boasts Wendy Venturini, Krista Voda, Steve Byrnes, and John Roberts as "multi-functional" on-air talent who can provide the network a wide variety of support both in the studio and at the track.

Good luck to Randy in his new role, and kudos to SPEED for stepping-up and making an investment in someone working very hard to return to a full and normal life.

The Daly Planet welcomes comments from readers. Simply click on the COMMENTS button below, or email editor@thedalyplanet.tv if you wish not to be published. Thanks again for taking the time to stop by.
Posted by Daly Planet Editor at 10:58 AM 1 comment: