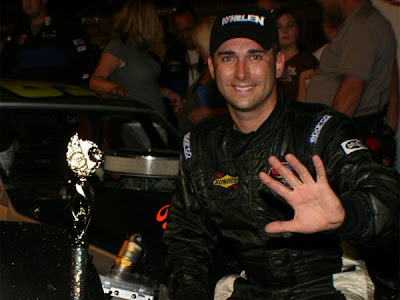 There is no other way to describe the reaction to The Daly Planet asking NASCAR Now to cover the sport's regional racing action last season. The word is...ugly.

Comments poured-in from fans and self-appointed ESPN "loyalists." There were many angry words from those who did not seem to understand NASCAR and had never even seen a regional race. We believed that included many of the folks working in Bristol, CT on NASCAR Now.

Minor League Baseball they called it. NBA D-League and nothing more they said. Who watches the Nationwide Golf Tour? What a waste of time. The endless stick-and-ball comparisons gave a profile of what ESPN's attitude about NASCAR was in 2007.

As the season progressed, NASCAR Now found itself surrounded by regional racing action. One regional series ended the year live on SPEED. Other races found their way to Mark Cuban's HDNet, and also to SPEED. The racing was good, the stands were packed and it became clear that NASCAR Now had missed the boat on an entire slice of the NASCAR pie.

Thursday on NASCAR Now, host Nicole Manske spoke with Carl Edwards about his season and then allowed him to plug his Claritin sponsor. Kenny Wallace stopped-by to introduce his US Border Patrol ride, and talk about the on-going sponsorship woes on the Nationwide tour. But, there was one more NASCAR driver on the program.

L.W. Miller was interviewed by Manske, and that was a moment to remember. Miller is the 2007 NASCAR Whelen Modified Southern Tour Champion. This was not a random interview on a day when news was slow and there was a scramble for content. NASCAR Now was interviewing the champion in advance of the first race in this series for 2008.

On Saturday, March 22nd, the Modifieds take to the half-mile Caraway Speedway in North Carolina for the Whelen 150. There will be a 26 car field for the race. On NASCAR Now, Miller said he expected many more cars to try and make the field. In a year where "field fillers" have become a regular occurrence, the Whelen Modified Series will be sending cars home.

Over at the Whelen Racing website, the importance of the Modified and All-American Series is explained quite well. Whelen Engineering, based in Connecticut, makes the lightbars on your local police cars and everything else that has to do with emergency lighting for several industries. All their products are made in America.

Miller was a good interview for Manske, who asked the right questions once again. She followed-up with Boris Said about the future for Miller, and that put a nice cap on the formal introduction of regional NASCAR racing to NASCAR Now.

With the Northern half of the Whelen Modified Tour not getting underway until April, this Caraway race will be a great mix of Southern regulars and Northern "mod-wackers." Miller pointed this out in his interview with Manske.

Hopefully, NASCAR Now will be showing highlights of the Caraway race next week, and continuing to develop a maturity about NASCAR as a whole that would be a welcome change. Miller's featured interview was a strong step in that direction.

The Northern Modifieds begin their season April 15th over at Thompson International Speedway in Thompson, CT. That is about 70 miles from the ESPN headquarters in Bristol, CT. Perhaps, some of the NASCAR Now gang might want to make the trip and enjoy a regional NASCAR race in person.

The Daly Planet welcomes comments from readers. Simply click on the COMMENTS button below and follow the directions. The rules for posting are located on the right side of the main page. Thanks for stopping by.
Posted by Daly Planet Editor at 7:58 PM 25 comments: