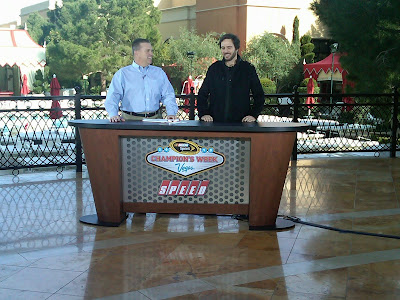 There was a time when executives at SPEED simply laughed when we brought up the concept of adding a weekday NASCAR news program. Primetime on weekdays was dominated by "lifestyle" shows that had absolutely nothing to do with real racing or sometimes any type of motorsports at all.

Over the years, the network has towed trucks in Chicago, served beer to bikers in Texas and created a phony drag racing franchise right out of central casting. Through it all, SPEED had a NASCAR news void from Monday through Thursday every single week during the racing season.

Officially, no one is saying exactly how the Race Hub series began in 2009. It was October and SPEED had just been named the official TV network of the new NASCAR Hall of Fame. The rumor was that NASCAR was not very happy with the weekday "void" we mentioned earlier.

Suddenly, from out of the blue, word came that SPEED had added a weekday half-hour of NASCAR news on Monday through Thursday at 7:30PM. In a flash, the scramble was on to put SPEED in the NASCAR news business. This was not another NASCAR Media Group production either, it was all SPEED.

Kyle Petty is fond of using the term "cluster" when things are not going well and the ramp-up to the original version of this show certainly fit that bill. Krista Voda was the original anchor along with appearances from some of SPEED's other on-camera regulars.

OK, so the make-up was bad, the sound was awful and the studio was corny but who cared? After years of being told NASCAR would not work in primetime on SPEED, there it was. Voda tried her best to make the early shows go and the series showed enough promise to return for 2010.

Once things got rolling this year, it was apparent that there were some problems to be fixed. Thirty minutes works for ESPN's NASCAR Now, but it was clear that SPEED had a lot more content available and often the shows seemed to leave a lot on the table.

Voda also split time with multiple hosts and the lack of a consistent presence was not good. The series needed a full time host who knew NASCAR and had a comfortable relationship with TV viewers.

This summer, SPEED answered a lot of these questions with one press release:

SPEED unveils its new NASCAR Race Hub set Monday, Aug. 16 at 7 p.m. ET with Steve Byrnes as the new full-time host. Byrnes, a veteran NASCAR broadcaster with more than 25 years of experience, has served as a rotating host of the one-hour nightly NASCAR news and information program that premiered last October.

In much the same way that the show had appeared from nowhere, SPEED expanded to one hour and inserted Byrnes as the host right in the middle of the NASCAR season. It took a lot for Byrnes to come off the road after many years of hosting Trackside as well as practice and qualifying sessions for SPEED.

Race Hub also added a full time "local reporter" since the SPEED studios are only a short drive away from most of the team shops. Danielle Trotta was the rookie with only limited TV experience who was thrown into the mix with Byrnes.

After a few tweaks to the set, the new line-up began to get some momentum going. NASCAR personalities now had access to national TV with only a short car ride to the SPEED studio or they could arrange for Trotta to come to them. In addition, the show had access to Larry McReynolds and Jeff Hammond who also live in the area.

In just two short months, Race Hub has proven itself to be a solid provider of interviews, features and NASCAR news. Very different from NASCAR Now, Byrnes has been able to build a comfortable studio environment that has seen a wide variety of guests since October.

Last week, SPEED confirmed that Byrnes, Trotta and Race Hub would be returning for 2011. The series will remain one hour in length and run Monday through Thursday. During the NASCAR on FOX weekends, Byrnes will also be returning to his pit road duties. That should make for a busy spring season.

With new management at SPEED, we can only hope that Race Hub will provide a platform on which to create additional NASCAR-themed programming. A Monday NASCAR version of Wind Tunnel, a weekly Camping World Truck Series show and an extended interview program like The Humpy Show are all ideas that have been kicked around for a while now.

Race Hub was a great first step toward turning the focus of SPEED away from entertainment programs and bringing it back to motorsports of all types. We should know exactly when Race Hub is going to return and what other NASCAR programs may be coming to SPEED before Christmas.