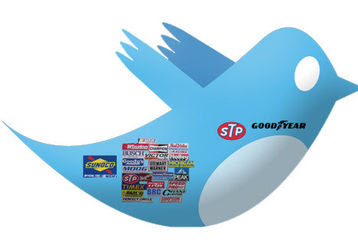 Updated: Tuesday ESPN's John Skipper told CNBC that ESPN is also cooperating with Twitter to control hashtags for live sporting events seen on the ESPN networks. Skipper admitted that while one goal is to make it easier for fans to see the content in one place, ESPN and Twitter will be inserting advertising into the hashtag streams and splitting the revenue. Maybe we finally got the real story that NASCAR never mentioned. Here is the video: http://video.cnbc.com/gallery/?video=3000091778

Amid the news from the All-Star festivities at the Charlotte Motor Speedway, there was one announcement that pertained to social media and NASCAR TV. An executive from Twitter and the Chief Marketing Officer of NASCAR announced a partnership that will begin with the Pocono race in June.

Here are some of the details in the media release:

NASCAR and Twitter announce a unique digital partnership that will create a new way for the sport's millions of fans to experience what happens inside NASCAR and its teams on race day.

During a race, when fans click on #NASCAR, search for #NASCAR on Twitter.com or visit twitter.com/#NASCAR, they'll reach a new Twitter experience where they will see the most relevant tweets from their favorite NASCAR drivers, NASCAR families, teams, commentators, celebrities and other racing fans and personalities.

Twitter.com/#NASCAR will be available starting with the Pocono Raceway race weekend and will be most active on Sunday, June 10, in conjunction with TNT's first of six television broadcasts of the Sprint Cup Series season. This new product will provide a complementary Twitter experience to TNT viewers looking for in-depth access to the happenings at the track and in the garage of a NASCAR race weekend.

Twitter is a simple concept. Each user selects from a huge list of folks on Twitter and creates a timeline that allows a stream of tweets from those selected to appear. A tweet can contain a link to a picture, video or webpage. This service is useful because it appears in real time and can be accessed on any kind of portable device.

Over the last few years, Twitter has gained a strong foothold with NASCAR fans. Teams, drivers, sponsors, tracks, and NASCAR officials have found it an incredibly quick way to get information to fans. The NASCAR media including the radio, TV and online news reporters have also gravitated to Twitter. News is now often reported first on Twitter and then in longer form on NASCAR news websites.

When an event is happening, Twitter uses hashtags. This feature has a # symbol and then a word or abbreviation. So, #BBMA was used for Monday's Billboard Music Awards. Twitter users just type that into the search box and all the tweets with that hashtag pop right up. It's a handy feature.

This hashtag search is automatic, but that seems to be on the verge of changing. Here is what Twitter executive Omid Ashtari explained on the topic of NASCAR.

"During the race, we’ll curate accounts from the NASCAR universe and surface the best Tweets and photos from the drivers, their families, commentators, celebrities and other fans," said Ashtari.  Mashable reported Ashtari called the arrangement "part search algorithm and part editorial."

What Ashtari is talking about is a Twitter social media producer taking active control of the #NASCAR hashtag during a race and adding an editorial voice to what is now a fully automated feature. Control is a word that NASCAR already knows very well in terms of social media content created about the sport.

Just as SPEED created the Social Media Garage to try and encourage Twitter users to interact with the network's TV offerings and personalities, it seems that NASCAR and TNT are combining with Twitter to try the same thing on a much broader scale. There is little doubt that the content from the new supervised and coordinated #NASCAR hashtag is going to be actively featured during the TNT telecasts.

It's still a puzzling issue as to how many active Twitter users will follow a #NASCAR hashtag for an entire race. Most users have worked hard to create a timeline that is perfect for their taste in teams, news and information. The real impact of a coordinated and produced #NASCAR hashtag might be on non-users.

TV viewers not using Twitter will be seeing tweets about the sport on the TNT telecast throughout the race. Apparently, non-users will also have access to the #NASCAR hashtag stream of comments online. This second stream of information is one that current NASCAR fans on Twitter are very familiar with these days. There are many voices all competing for the attention of the NASCAR fan base.

Ashtari said working with NASCAR will enable Twitter to learn how to move into a more editorial role when it comes to working with professional sports leagues. It's interesting to remember that a key attraction of Twitter to many is that users are judged on what they tweet solely by the other Twitter users.

By encouraging NASCAR fans to move to this controlled hashtag environment Twitter gets an opportunity to dip its toe into professional sports, TNT gets a unique TV feature and NASCAR gets a user-friendly feed full of positive content about the sport.

What is not very clear right now is what benefit fans get from the arrangement. While not actually blocking user access to any NASCAR content, this adding of an "editorial voice" during Sprint Cup Series races simply means fans will now see an edited and controlled stream of information on the #NASCAR hashtag.

For a global business built on delivering real time digital content, moving into controlling and editing that same content for a specific target group is a curious move for Twitter. Ultimately, all of this may be just a confirmation of the significant impact that NASCAR fans using Twitter are having on the sport.

We invite your comments on this topic. Comments may be moderated prior to posting. Thank you for taking the time to stop by The Daly Planet.
Posted by Daly Planet Editor at 5:00 PM 42 comments: