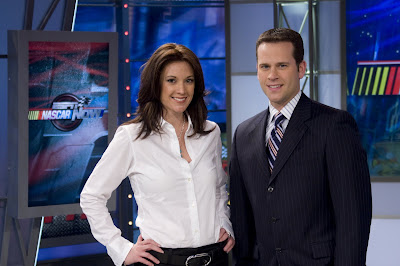 ESPN has learned a lot from the tough times the network had in 2007 when they waded back into the NASCAR scene. The wholesale changes in both the on and off-track personalities and the increase in the level of commitment to the sport has been nothing short of remarkable.

Dale Jarrett and Allen Bestwick have been leading the new ESPN team trackside. Rusty Wallace has embraced his new role as a commentator and Andy Petree is simply having a spectacular season as an analyst.

Away from the track, the struggles of ESPN's daily show called NASCAR Now last season were well-documented. The result has been an overhaul of the program format and the on-air announcers. Since the series came on-the-air in February, the momentum of this show has been slowly building.

It has been interesting to watch the Connecticut-based ESPN production staff begin to embrace NASCAR as something more than a "southern curiosity." At the forefront of this change has been the addition of Allen Bestwick and Nicole Manske to this series.

While last season's substitute host and ESPNEWS anchor Ryan Burr continues on the show, Bestwick and Manske have brought an entirely new level of professionalism to both the TV series and the network.

NASCAR fans know the recent professional struggles of Bestwick, and have watched him labor to once again become a key element of ESPN's network coverage. His effort has been rewarded this season, as Bestwick has emerged as the leader of ESPN's NASCAR team.

Manske came to ESPN from SPEED with one big question mark on her resume. Could she handle the national spotlight alone as a host and reporter? From her first time on-the-air at Daytona in February, the answer has been yes. Now, three months into her first NASCAR Now season she blends seamlessly into the program.

After a stellar "roundtable" show on Monday, NASCAR Now presented a one hour live special from DEI in Mooresville, NC on Tuesday. It was Dale Earnhardt Day and fans, drivers and family members were on-hand at the shop. For this version of NASCAR Now there were no scripts, no distractions and no hype.

Burr anchored in the studio and Manske handled things at DEI. These two have proven to be effective on-air partners this season. Manske knows how to listen, and she did just that with a wide variety of guests from Kerry Earnhardt to Mark Martin. Listening was something in short supply on this series in 2007.

In this show, ESPN finally also discovered the NASCAR fans. Hearing from Americans who had their own unique and individual stories about Earnhardt Sr. was a very nice touch throughout this show. More fan input will only help to make this series even more "human."

Despite the issues some fans have with Teresa Earnhardt, the commitment of ESPN to originate this program should not be overlooked. Dale Earnhardt Day could simply have been a two minute taped report on the normal thirty minute Tuesday episode of NASCAR Now.

Instead, other ESPN2 programs were moved aside and one hour of NASCAR took center stage as close to primetime as was possible. The show interviewed almost everyone available, and put a very human face on DEI at a time when the company needed a little boost.

Fans may have been most emotional when Burr introduced a tremendous Earnhardt feature that put together a ton of footage from the ESPN vault. Transcending the decades, it put a unique face on a man who meant so much to so many.

Following-up on this feature and finally in his correct on-air role was Dr. Jerry Punch. Given the opportunity to talk about Earnhardt, Punch let the words and the emotions flow. Viewers got the opportunity to see Punch in the environment in which he is most effective. His experience in this sport is second to none, and hopefully he will begin to contribute to NASCAR Now more frequently as a commentator and reporter.

There was no better way to finish-off this program than to bring in Earnhardt's longtime friend and employer Richard Childress. Burr let Childress talk about the off-track personality of "Senior." Childress made it clear that Earnhardt single-handedly had made his RCR company successful. "RC' is a plain-spoken man, and he put the tidal swell of popularity for NASCAR during the final Earnhardt years in good perspective.

Every TV series needs a good defining moment. Fourteen months after it first came on-the-air, NASCAR Now has finally experienced just that. It was not at a racetrack, it was not on a weekend and it was not all from the ESPN studios.

NASCAR and ESPN finally came together in the green grass of the big front lawn at DEI. Amid fans, drivers and family members the TV network discovered it is not High Definition, loud rock music or brightly colored graphics that define NASCAR on TV.

It is simply the ability to understand that at its core, NASCAR is just ordinary people getting together to do what they like to do. On this day, ESPN let the fans and the sport do the talking with memorable results.

The Daly Planet welcomes comments from readers. Simply click on the COMMENTS button below and follow the easy instructions. The rules for posting are on the right side of the main page. Thank you for taking the time to stop by.
Posted by Daly Planet Editor at 10:00 PM 15 comments:

Monday night in New York City the 29th Annual Sports Emmy Awards were given out and NASCAR was well represented. Two of NASCAR's TV partners and its own in-house production group were among the winners.

The NASCAR on Fox gang claimed the Emmy for "Outstanding Live Sports Series."

This is a big category, and included Sunday Night Football, the NBA and the PGA Tour. As we said last season, the Fox crew made great pictures and sound on the Cup races. Add-in a veteran on-air team and the combination speaks for itself.

Many NASCAR fans might cringe when reminded that what may have been their favorite show from NASCAR Images is still on-the-air. NASCAR Images has now become the larger NASCAR Media Group and Beyond the Wheel is now called Quest for the Cup.

That's right, the award winning show that lived for a short while on SPEED is now being produced for VOOM. Once again, the 2007 edition has grabbed the Sports Emmy for "Outstanding Live Event Turnaround."

It was ESPN and Fox that shared honors for the technical work on the NASCAR trail. Both networks received Sports Emmys for "Outstanding Technical Team - Remote." The term remote designates an event that is produced in the field.

As most fans know, NASCAR technical operations for one race have often been compared to the Super Bowl or an Olympic venue. Many companies from in-car camera providers to the folks who build and maintain the production trucks share in this honor.

On the down side, the 2007 Daytona 500 was bested by college football as The Fiesta Bowl took home the prize for "Outstanding Live Sports Special."

Also, the wonderful movie Dale from NMG came up short in the "Outstanding Sports Documentary" and "Outstanding Music Composition" categories. This effort was certainly an award-winner in the minds of many fans.

For some reason, NASCAR Now with Erik Kuselias from last season was not chosen as the "Outstanding Studio Show - Daily." While Inside The NBA on TNT won this round, it might be a very different result next year if ESPN2 can keep the "new" NASCAR Now on its current roll.

There is also a category for "Outstanding Sports Personality." It is divided into play-by-play, studio analyst and event analyst. From 2007, no NASCAR personality appeared in any of these three categories. Perhaps, next year may see Mike Joy, Dale Jarrett and Larry McReynolds names appear on the list.

Draft Track has quietly faded from the ESPN coverage, and it will be interesting to see if makes a comeback on the Sprint Cup portion of the ESPN/ABC coverage later this season.

That is basically a wrap-up of most of the Sports Emmy action, with NASCAR coming away with three big category wins. Nominations for the 2008 NASCAR season should be announced in March of next year.

The Daly Planet welcomes comments from readers. Simply click on the COMMENTS button below and follow the easy instructions. The rules for posting are on the right side of the main page. Thank you for taking the time to stop by.
Posted by Daly Planet Editor at 9:35 PM 11 comments: