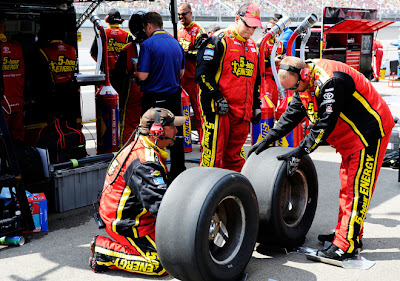 Tires were the story going into the Sprint Cup Series race from the Michigan International Speedway. Shortly before noon, rain came to the area and resulted in a delay until 3PM ET.

This week you are going to set the tone with your comments and I will add mine in the comments section. There was a very strong reaction to the TV production and specfically the directing of this race, so the fan comments will  be made without my input.

The pre-race show ran through the scheduled format and then expanded to interview everyone possible. From discussing Vegamite with Marcos Ambrose to watching kids crash bicycles with training wheels, it was pretty clear TNT was out of things to do. The track services crew did work in record time and there were no other interruptions.

Adam Alexander hosted the pre-race with Kyle Petty and Larry McReynolds from the infield stage. They were joined by Brad Keselowski for an extended interview with social media as the focus. The pit reporters worked very hard during the rain delay. They were Chris Neville, Matt Yocum, Marty Snider and Ralph Sheheen. Alexander moved upstairs to call the race with Petty and Wally Dallenbach Jr. from the TV booth.

This post is for comments on the TV production of the race. To add your opinion, just click the comments button below. Comments may be moderated prior to posting.
Posted by Daly Planet Editor at 11:00 PM 56 comments: