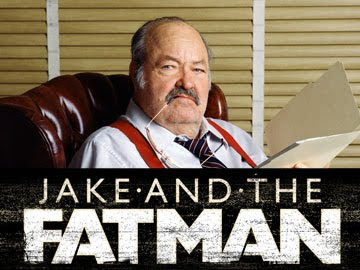 Jake and the Fatman had a nice five year run on CBS starting in 1987. After seeing William Conrad guest star on Matlock, the producers of Jake cast him as the lead. The fatman never traveled without his pet bulldog, Max.

The show started in Los Angeles but moved to Hawaii when Magnum PI stopped production. It moved back in the final season. Fatman McCabe was a former cop turned prosecutor who did not take any crap. He was a seasoned veteran who had some tough luck in life but had persevered. He's perfect for the investigation of ESPN's Brickyard coverage.

This week, ESPN turned the page and made a ton of changes to its NASCAR coverage. Foremost was putting TV veteran Allen Bestwick in the lead announcer position.

Bestwick had Dale Jarrett and Andy Petree alongside in the broadcast booth. Nicole Briscoe hosted from the infield with Rusty Wallace and Brad Daugherty. Tim Brewer was in the Tech Garage.

ESPN offered several slickly produced features in the pre-race show. Briscoe noted that Wallace was affected by one of them and was actually brought to tears. The program focused a lot on the history of the speedway and not really on this race as the continuation of a season that started in February.

Bestwick made big changes right away. He is a radio veteran and his strong point is continually passing along information to keep the viewers at home up to date. Recaps are done regardless of what is showing up on the screen for video.

Hope Solo was a visitor to the infield studio after her pace car duties. She was not a person who has done a lot of TV and her appearance during green flag racing was awkward. She tried to steer the conversation toward soccer and it didn't make a lot of sense.

Ned Jarrett stopped by the broadcast booth mid-race. David Ragan was driving a Jarrett tribute car in the race. Jarrett was on his game and actually stopped his own interview when a car made an unscheduled pit stop. Nice to see some of ESPN's NASCAR roots being celebrated on the air.

ESPN knew this race was going to be a series of long runs with passing happening on pit road and restarts. This year, Bestwick moved right past that and focused on calling the race and letting the reality of the event come through without a network agenda.

A new graphics package and some new looks in the coverage were nice touches. A four video box split on caution flag pitstops was nice. The "Bat-cam" on pit road did not play into the coverage, but was nice when used on green flag stops and some restarts.

ESPN dropped the lower third score ticker called "The bottom line" for this race but the network says it will return for the NFL season. Not having another ticker on the screen during a live event where a scoring ticker runs almost all the time was nice.

ESPN made nice pictures, but the difference was that these pictures were big. ESPN stayed wide and helped fans with larger perspective shots that showed big groups of cars in the shot. Combined with Bestwick's ability to pass along information, it made a huge difference.

Commercial breaks under green are tough, especially on a big track like Indy. The commercials were just a bit tougher to take since ESPN decided not to use the RaceBuddy application from Turner Sports to offer even a basic online alternative. It should be noted that ESPN will used side-by-side commercial formats for the final half of each of the ten Chase races.

As everyone knew, the race consisted of passing on pit road and restarts. Incidents just came from pushing and shoving for position. The race came down to fuel mileage as it often does in the Indy 500. NASCAR's fuel wars are a big story.

This was a nice change for ESPN with professional coverage of a NASCAR race with just one glitch. ESPN showed only the winner cross the finish line. No other car was shown. Big mistake for fans of the other drivers still racing as Mendard finished.

This post will serve to host your comments on the ESPN production of the Sprint Cup Series race from Indy. To add your TV race wrap-up, just click on the comments button below. Thanks for stopping by. 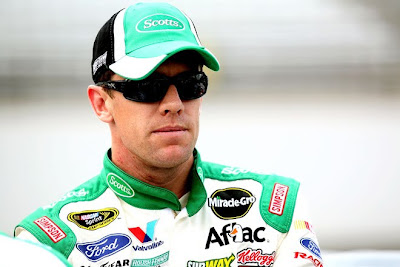 ESPN has pulled out all the stops for the Brickyard 400. Allen Bestwick is in as lap-by-lap announcer. There is a new graphics package. Nicole Briscoe is hosting the infield studio. Dual-stream technology will allow two in-car camera views from the same car. The "Bat-cam" that runs 80mph on a wire above pit road is back.

The big question is will all that make a difference if the production of the race is once again horrible?

Since 2007 ESPN has struggled with this event. It's really not clear why. The network produces all different kinds of live sporting events around the world. What is the challenge at Indy?

Briscoe will kick-off the coverage at noon ET with Rusty Wallace and Brad Daugherty alongside. Wallace is coming off a disjointed Nationwide Series telecast on Saturday night that saw him pick his brother Kenny to win the race and then watch as his son Steven destroyed both of the RWR cars in a violent wreck of his own making.

Daugherty has become increasing isolated on these telecasts, especially once the actual racing begins. At one time, Bestwick called Daugherty "The voice of the fans." It may well be that next season Daugherty is a fan on a full time basis.

Tim Brewer will once again be in the Tech Garage. It should be interesting to see how ESPN gets him into the telecast if long green flag runs are the order of the day.

Putting Bestwick in the booth was a hint to the reality of the continued struggles of Marty Reid in that position. There was never a mention by ESPN that any change was coming, it just did. Over the past five seasons, Bestwick has been the best thing that ESPN has going for it on the NASCAR trail.

The pressure on Bestwick is to balance the reality of this "no passing" style of aero-driven racing with the spectacle of the Brickyard. He has been in these situations before and makes no bones about being a pro-active supporter of the sport.

The two items that Bestwick repeats over and over again are simple to understand. NASCAR cars racing at speed on any track are not boring. Secondly, every race is not over until the checkered flag. When some media folks offer boring racing as a problem, Bestwick disagrees. His checkered flag scenario has proven itself time and time again.

This is a big shift for ESPN. Bestwick is not "their man." The loyal soldiers Jerry Punch and Marty Reid were used long before ESPN took a glimpse at Bestwick. The only reason this move happened is because ESPN realized the coverage was at risk with Reid at the helm.

The big story overshadowing this race is the status of Carl Edwards. Lee Spencer of FOX Sports reported Edwards is going to the #20 for JGR with a huge signing bonus and contract. Now, media outlets are reporting that Ford Motor Company is trying to out-bid JGR and keep Edwards at Roush. It's no secret the Roush sponsorship picture is not a pretty one for next season.

The vast majority of passing will be done on pit road. Jamie Little, Punch, Dave Burns and Vince Welch will be the reporters. Bestwick is a stickler for information, so look for him to ask a lot of questions and want details from the four TV veterans patrolling that area.

Saturday night, it only took ESPN about ten laps to return to the problems of last season in terms of directing the coverage. Rather than open the cameras and show all the racing on the track, ESPN zoomed-in tight and showed two-car battles all night long.

Late in the race, the network went to commercial with Justin Allgaier's car on fire and still circling around the track. By the time the coverage returned, Allgaier was gone and the entire complexion of the race had changed. ESPN missed everything.

The top challenge for the network today is to keep the larger perspective in frame for the fans, especially if passing is at a premium. Just like ESPN does for the Indy 500, use the wideshots and aerial views to continue to keep fans interested.

This post will serve to host your comments on the ESPN coverage of the Brickyard 400. To add your TV-related opinion, just click on the comments button below.