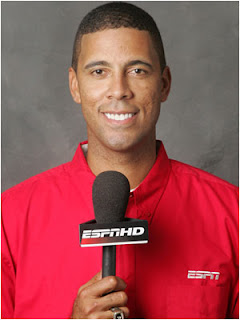 This first year of NASCAR's new TV contract has been a lot of fun. There have been many new things to talk about, including the only daily NASCAR show currently on TV. That would be NASCAR Now, which airs on ESPN2.

The on-air line-up has become a familiar one to many, and includes Stacy Compton and Boris Said as analysts. These two drivers have been good for the show, and have no problem stating things in plain english when it comes to racing.

Rarely, do we see members of the NASCAR on ESPN announce team appear, although Tim Brewer does leave the Tech Center once and a while to talk about various topics. Jerry Punch, Rusty Wallace, and Andy Petree have never been regulars on this show, and their presence is missed.

Erik Kuselias is the fulltime host of the show, relieved two days a week by ESPN News anchor Ryan Burr. Kuselias is a script reader, and works the show from a handheld script that guides him through the questions of the field reporters and provides him "intros" to features.

The show also uses various ESPN pit reporters like Shannon Spake, Mike Massaro, and even Allen Bestwick from time-to-time to add interviews and the like. Spake has been the workhorse this season, and her low-key approach and calm interviewing manner has been well received by the NASCAR community.

This show needed journalists, and they picked up Angelique Chengelis from the Detroit News, while Marty Smith, David Newton, and Terry Blount all came over to the ESPN.com world along with contributing to the show.

The most interesting person for ESPN this season has been former NBA star Brad Daugherty. Originally tabbed as only in the mix for his skin tone, he quickly proved that he knew the sport. After the passing of Bill France Jr. he also proved that he is a caring and compassionate man when telling stories of his personal relationship with France and his wife. His access to the personalities at the highest level of this sport was almost unbelievable.

Daugherty was involved in the NASCAR Drive for Diversity, and in several conversations this season on-the-air he let it be known that he was not exactly pleased with the results of NASCAR's efforts in that area.

When he was originally announced as being added to the ESPN/ABC team, he reacted this way. "I have a little bit of technical and ownership experience, but mostly I am a fan."

Daugherty was a part-owner of Liberty Racing, a Truck Series team that won two races with the late Kenny Irwin Jr. back in 1997. He also campaigned a regional team with Robert Pressley that briefly stepped-up to the Busch Series and won a short track race in North Carolina.

Interviewed by Sports Illustrated writer Richard Deitsch, Daugherty was asked if he was aware that he was the most visible African-American covering the sport, and just how significant that was? He responded "To be honest, that's the main reason I'm doing this."

Deitsch then asked him "will you own a race team again?" Daugherty answered that "I would be interested in becoming a Cup owner someday, and probably will try to do that at some point."

Daugherty's role in NASCAR TV is a new one. It has left many fans wondering what exactly Daugherty brings to the table in terms of the TV broadcasts and the NASCAR Now studio show. Depending on the announcer that Daugherty is working with, he can either be tabbed as "the voice of the fans," or an ESPN NASCAR Analyst.

On Wednesday, Daugherty put on his Analyst hat for an appearance on NASCAR Now. In this show, Daugherty was presented to viewers as a person who could analyze for ESPN the new NEXTEL Cup Chase format.

Daugherty has been one of the biggest cheerleaders for The Chase on the ESPN staff, and in his comments he lamented the lack of an incentive for the Chase competitors to "go for the win." He said once The Chase starts, those guys basically points race just like the regular season.

In evaluating Jimmie Johnson's chances in The Chase, Daugherty said "this whole sport is about momentum." He added that Johnson was "probably the most consistent and aggressive race driver (in The Chase)"

On Kurt Busch, Daugherty said "Kurt Busch has driven the wheels off that race car. He is definitely a contender to win this whole thing. It just depends on how he gets started this week in Loudon."

Finally, on Tony Stewart and The Chase, Daugherty said "I think Tony will be the guy to beat. I think he is the one guy who will not go out and points race. He will go out and try to win a championship. Its all Tony Stewart's to win."

In making his closing remarks to Erik Kuselias, Daugherty said "let's clarify, this is all speculation by me. This is just what I observe." Kuselias then closed the interview by saying "that is Brad Daugherty...Analyst."

During the NASCAR season, ESPN has found itself struggling with the Wednesday editions of NASCAR Now. With no highlights to review, and a race just a little too far ahead to preview, the show has taken wild swings between long talks about Fantasy Racing and long interviews like the one with Daugherty.

When Daugherty appears in the ESPN Infield Studio with Allen Bestwick, it is immediately made clear that he is "the voice of the fans." Daugherty thrives in that role, primarily by asking questions of the other announcers about issues in the race. He does not have to pretend to "know," he is just a fan.

Earlier this season, when he was put in an Infield Studio Analyst role alongside Ray Evernham, things got ugly. Then, alongside of Rusty Wallace, things got tense. Even if the host of the show says that Daugherty knows "racing things," that does not mean the tough and hardened NASCAR gang is going to agree. In those cases, they certainly did not.

Recently, he was allowed to be the third announcer in the booth during a practice and qualifying multi-hour marathon telecast. Relaxed and polished off-camera, Daugherty came across as an enthusiastic NASCAR supporter with a solid knowledge of the sport. He interacted well with the crew, and once again asked the type of questions a fan might ask if put in that position.

The quandary for NASCAR fans is very clear. Which Brad Daugherty will appear the next time on ESPN or ABC? Is it Daugherty the fan, or Daugherty the analyst? Last week, Infield Studio host Suzy Kolber even called on Daugherty the NFL Expert to handicap the upcoming NFL game on ESPN.

As ESPN continues to re-define the NASCAR TV broadcasts, they also continue to paint Daugherty into his own corner. The network needs to decide what role Daugherty is playing in the very important "Chase for the Championship" this season.

They have not allowed him to do any key interviews, and the ultimate slap in the face is Suzy Kolber walking out to the starting grid for the featured driver interview of the pre-race show. Kolber is completely new to NASCAR, and will be the first one to admit it. There sits Daugherty, alone and silent.

In the race, Daugherty is inserted coming back from commercial on-camera despite the race being under green flag conditions. His attempt at talking about race highlights or asking some questions of another announcer actually takes the place of live racing. This did not go over well with the fans.

In the end, it seems that Daugherty has made the most of his exposure this season. In these final ten races, he is poised to play a key role on the ABC broadcast network coverage and on ESPN2. He will co-anchor the pre-race, continue to be live from the Infield during the race, and then appear during the week on NASCAR Now.

In Daugherty's own words, "I have a little bit of ownership and technical experience, but mostly I'm a fan." I would dare say that in the twenty years of NASCAR on TV, no fan has gotten the wild ride that Daugherty has been on since February. Did I mention that this NASCAR TV season is really interesting?

The Daly Planet welcomes comments from readers. Simply click on the COMMENTS button below, or email editor@thedalyplanet.tv if you wish not to be published. Thanks again for taking the time to stop-by and leave your opinion.
Posted by Daly Planet Editor at 7:17 PM 30 comments:

Thanks Once Again To Dave Moody

A big thank you once again to Dave Moody and his entire staff at Sirius Speedway for allowing me to stop-by and talk NASCAR TV.

We covered a lot of ground and tried to make sure and mention the great comments you have left on this site every day since February.

Thanks to all of you who have taken time out of your day to read the daily column, and then lend your thoughts to this on-going conversation about NASCAR TV.

To add a comment to this post, simply click on the COMMENTS button below. No sign-up is required, you do not have to leave your email, and there is no membership issue. The rules for posting are on the right side of the main page.
Posted by Daly Planet Editor at 5:54 PM 6 comments: