It's Opening Day For ESPN 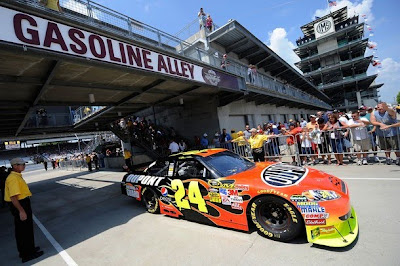 The on-track action may begin on Friday, but all hands are on deck for ESPN's opening day TV special from the Indianapolis Motor Speedway on Thursday. NASCAR Now will be one-hour long and will air at 5PM on ESPN2. Unfortunately, the show does not re-air.

Late afternoon on a Thursday is not perhaps the timeslot NASCAR deserves, but fans have learned over the last three years to take what ESPN gives them. The good news is that what ESPN is promising to give is something different.

What the network desperately needs from NASCAR fans is a clean slate. The embarrassing TV fiasco called the Chase for the Championship did almost nothing last season but make everyone mad.

Fans of non-Chase drivers saw them slowly slip off the ESPN radar until they were never seen again unless leading a race. Fans of Chase drivers were hit over the head constantly with the meaningless "points right now" stat as if the race were suddenly going to be halted by locusts.

Even fans of Jimmie Johnson chimed-in last season on ESPN's overkill of that team. There is now a word for what ESPN does when it zooms-in on one topic and beats it to death. It's called "hyper-coverage." No one seems to know quite where it came from, but it's rapidly becoming the thing to do.

This season, ESPN has done all the right things during the ramp-up to these final seventeen races. Feisty Marty Reid is in the broadcast booth, dependable Allen Bestwick will host from the Infield Pit Studio and Dr. Jerry Punch has finally returned to pit road.

Thursday will be the first time ESPN will come on the air as the Sprint Cup Series network of record this season. NASCAR is in a TV tailspin. Critics are coming out of the woodwork because they smell blood in the water. It will not be an easy task to turn this ship around. The good news is that ESPN has the manpower, technology and talent to do just that.

Handcuffed by no online video streaming or RaceBuddy style application, picking the right thing to show to viewers is going to be the key that will either unlock the door to success or send fans running to the NFL when that season opens. The time to show NASCAR fans that things have changed is now.

These final races deserve to be presented as events with a singular focus on the actual racing. The Chase will take care of itself. The points will take care of themselves. Detouring again from the action on the track to tell stories that fit the ESPN script is going to doom this season to failure from the start.

No one is better at setting the tone for a race than Bestwick. His ability to offer exciting and informative commentary is well-known. The fact that ESPN chose to pass him by in the hunt for a new play-by-play announcer continues to amaze many folks.

However, without Punch to drag the telecasts down, this may be Bestwick's best season to date with ESPN. Reid and Bestwick know their respective roles and know how to fill them. Reid said in interviews this week that this is the biggest TV opportunity of his life. Count on him to make the best of it.

Fans who saw Punch at Gateway this past weekend know how he can draw emotion out of NASCAR personalities. Punch is the quintessential reporter. Instead of hanging his head after being replaced in the booth, Punch has used the Nationwide Series races to get back his credibility on the air. His timing is perfect.

Reid has already proven his ability to draw Dale Jarrett out of his polite shell and get him to speak his mind on the air. This was one of the greatest fundamental failures of Punch in the booth. Jarret and Andy Petree spent a great deal of time trying to add play-by-play commentary instead of simply being race analysts.

I will agree to give ESPN a clean slate. Start again, focus on the racing and show us that you know the sport and love it like we do. The NFL opens on September 9 with a special Thursday night game. That gives ESPN six races without competition.

There is perhaps more on the line than ever before as the sport heads down the stretch. NASCAR is counting on ESPN this season to deliver the goods in a season of uncertainty. The talking is over and the first pitch of the regular season is 5PM on Thursday.

We welcome your comments on this topic. To add your opinion, just click on the comments button below. This is a family-friendly website, please keep that in mind when posting. Thanks for taking the time to stop by The Daly Planet.
Posted by Daly Planet Editor at 5:00 AM 31 comments: