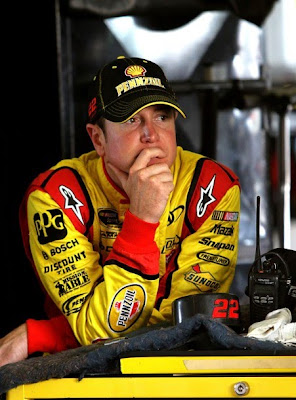 The big TV news this week was the final numbers coming from the Nielsen TV ratings folks about the Sunday race. NASCAR Chase races have been holding steady just below the 4.0 cable rating level for years now. Thanks to Tony Stewart and Carl Edwards that all changed.

"With a peak audience of 10.5 million when the checkered flag fell on champion Tony Stewart at 8:08 p.m. ET, ESPN’s telecast of the Ford 400 from Homestead-Miami Speedway averaged 6.7 million viewers and earned a 4.6 household coverage rating (4.0 U.S. rating), according to the Nielsen Company. The viewership average broke ESPN’s previous record of 6.6 million viewers for the 2008 Brickyard 400 at Indianapolis. Final figures do not include a rain delay from 4:45-6 p.m." That from ESPN's PR folks.

Pretty nice way to end a season full of the same old complaints about coverage during the ESPN telecasts. It seems a tad ironic that a two-man battle involving drivers racing with respect topped last year's effort that involved lots of TV hype and personal sniping among competitors.

The other big story is the Tuesday afternoon apology issued by Kurt Busch to Dr. Jerry Punch and the NASCAR on ESPN team. Click here to view the video of Kurt after his car's transmission failed early in the race and he was waiting to be interviewed on TV. Be aware that it contains profanity and is not suitable for youngsters.

"In my frustration with the loss of my transmission early in the race, I let my emotions get the better of me," said Busch. "I regret having done this and apologize to the sponsors of Penske Racing, to NASCAR, its fans, to the media and in particular, Dr. Jerry Punch."

Punch has been in tougher situations in the garage than having a driver throwing some poorly chosen profanities around for effect. ESPN acknowledged the apology and things will move on. Social media, in this case YouTube, once again playing a role in a NASCAR incident.

Speaking of ESPN, spokesman Andy Hall has confirmed that NASCAR Now will be returning next season. There are no details yet about in what format or timeslot, but it's clear after being pushed to mid-afternoon and having the later re-air cancelled the series needs some help. We will keep you posted.

Many fans asked why ESPN flew Tony Stewart to Bristol, CT on Monday and then did not have a final NASCAR Now show of the season. That is a great question. Instead, Stewart did some interviews on stick and ball shows and then hung a banner before departing. With three years left in the current NASCAR TV contract, perhaps someone at ESPN might make a note of this issue.

Here is a little DVR alert. The Sprint Cup Series race from Homestead re-airs on SPEED at noon ET on Wednesday in a three hour timeslot. That one is a keeper.

We are working with SPEED to find out future plans for the RaceHub program. It will continue next week at 6PM Monday through Thursday. Hopefully, there will be a holiday break and then it will pick right back up. Info on talent assignments was supposed to be out this week, but it looks right now like next week will be the time to find out who is going where.

The Camping World Truck Series schedule is finally out. There are only 22 races and both Richmond and IRP in Indy are not on the list. Rockingham will host a race and the series will wind-up in Homestead for a finale. Looks like a tough year for trucks coming up. We are waiting to see if Michael Waltrip's FOX duties will change SPEED's on-air truck series line-up for next year.

Click here for a great article by Karen Hogan on Bill France Jr. as he is an inductee for the Sports Broadcasting Hall of Fame. The late NASCAR chief was a colorful character who saw the sport through a period of amazing growth.

Tuesday night I participated in a podcast with Ken Fang of fangsbites.com and Keith Thibault of sportsmediajournal.com talking about NASCAR TV. Click here for the link page, the podcast will appear at the top of the page when it is posted. Thanks to those two for inviting me.

We invite your comments on any of these topics. If you have a question about the NASCAR media or TV, ask it. We will try to get everything wrapped-up before the Thanksgiving break. Thanks for stopping by.