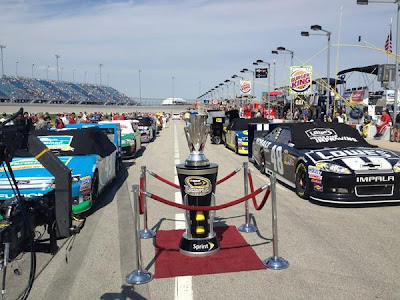 It is that time of the year. Chris Madigan from Sprint sent along this picture of the Sprint Cup sitting on pit road at Chicagoland Speedway prior to race one. Then, the actual race began.

Nicole Briscoe and her pre-race crew focused totally on the Chase. Rusty Wallace, Brad Daugherty and Ray Evernham were locked into discussing the topics planned in advance and it made for a less than interesting discussion. Many race fans had already watched one hour of NASCAR Now on ESPN2 and then two hours of NASCAR RaceDay on SPEED. Those shows also focused on the Chase.

Allen Bestwick continues to be an expert at directing traffic and his comments in reference to the race are always accurate. He seems to be handcuffed in terms of looking back in the field, recognizing that is where cars are racing for position and then getting ESPN's producer to go there with the cameras. Once again, the plodding and hyper-tight coverage of this series on TV continued.

Andy Petree and Dale Jarrett did not have much to work with other than some pitstops, part failures and restarts. The racing, as expected, was limited. Bestwick worked hard to pump the drama of the final pitstops but even that did not pan out in the end.

As we offered in an earlier column, the problem for TV is how to cover this playoff within a live race. In the end, once again, the teams not in the Chase were cheated out of TV coverage unless they were leading the race. As we have said for the last six seasons, all drivers and teams have fans. TV is there to serve them.

What are your comments on the coverage after this first race of the Chase? Thanks for taking the time to stop by.
Posted by Daly Planet Editor at 5:15 PM 28 comments: