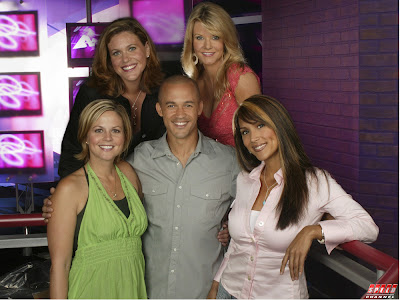 This season has been a tough one for the ESPN gang. Along the way, however, there have been several individuals that have proven over the course of ten months that they are simply without a doubt very hard workers. At the top of that list is Shannon Spake.

Debuting on ESPN as a field reporter for NASCAR Now and NASCAR Countdown, Spake quietly moved into a pit reporter role for many telecasts as the season progressed. Now, with the season concluded, ESPN has just announced that Spake will be given an opportunity to be a college football sideline reporter.

While the network has not identified the Bowl Game or Division Championship events Spake will be working, the message is clear. We like what you did and here is your reward. The bottom line is, she deserved it.

Many NASCAR TV viewers remember Spake from the infamous NASCAR Nation on SPEED where "stock car racing mixed with Hollywood Celebrities." It turned out that "collided" would have been a better word. Created around model turned celebrity turned sportscaster Leeann Tweeden, the program fizzled.

Spake was a reporter for the series, but also hosted another minor show called Backseat Drivers. Without all the glitz and glamour, that show forced Spake to stand-up on her own in the NASCAR world, no easy task for a female. Spake did well, and added some additional reporting from the NASCAR garage before that season was over.

Moving to ESPN was a big step, and in many ways she was thrown into the deep end of the pool with the NASCAR Now series. Fans may remember that this series was hosted by two men who had never been on a TV series before, or knew anything about NASCAR. What a nice thing to walk into as the primary NASCAR field reporter from Mooresville, NC.

There is absolutely no doubt that Shannon Spake and the NASCAR Now Insiders reporting the news kept this show afloat. Even as ESPN decided to defend their ill-chosen hosts, all-stars like Spake and Marty Smith, along with newcomers Terry Blount and Angelique Chengelis created the only content of interest to fans.

Michael Knight, the veteran motorsports writer said "on ESPN's weekday and pre-race programs, Spake has emerged from the wreckage of SPEED's wretched NASCAR Nation as a solid, straightforward reporter." High praise from an informed source.

Back on April 15th, only two months out of the box, The Daly Planet said "Spake has proven to be a consistently good reporter with a laid-back style of presenting information that works well with the NASCAR set."

When NASCAR Now let go of their original co-host Doug Banks, the suggestion was made to let Spake step-up and take a shot at hosting. Memories of her time on SPEED and her Backseat Drivers program with Marty Smith were still fresh. The network chose instead to extend those opportunities to Allen Bestwick and Mike Massaro.

This season has been tough on veterans like Massaro, who has been in the wrong place at the wrong time...a lot. From badgering Junior about missing The Chase, to asking Mark Martin the stupidest question in NASCAR TV history, Massaro is probably glad this season is in the books.

With Allen Bestwick bouncing back and forth between pit road and hosting duties in ESPN's Infield Studio, Spake was inserted to work with Jamie Little and Dave Burns on pit road. Burns is a clown, and his nature is to play the fool. Little has a very aggressive and over-the-top style, which rubbed some NASCAR fans the wrong way.

That left Spake, once again appearing younger than her thirty-one years, to be the focus of attention. Her memorable run-in with Kurt Busch where he not only chastised her on-the-air but off it as well was certainly an interesting moment for both, and probably ultimately served as a lesson learned for each as well.

This season The Daly Planet has typed Shannon Spake's name over two hundred and fifty times. When we reviewed NASCAR Now, there she was. When NASCAR Countdown was in our sights, there she was again. When ESPN2 or ESPN News covered breaking NASCAR news...guess who was on scene?

This has truly been a breakout TV year for Spake, who is a resident of the Lake Norman area near Mooresville, NC. A Florida girl who graduated from Florida Atlantic University, Spake has made the most of her TV opportunities along the way. It will be interesting to see how ESPN uses Spake in her college football debut, and what she can make of this big opportunity far away from the NASCAR stage.

The Daly Planet welcomes comments from readers. Simply click on the COMMENTS button below, or email editor@thedalyplanet.tv if you wish not to be published. Please read the rules for posting on the right side of the main page before adding your comment.

Thanks again for taking the time to stop by and leave your opinion.
Posted by Daly Planet Editor at 7:25 PM 39 comments: