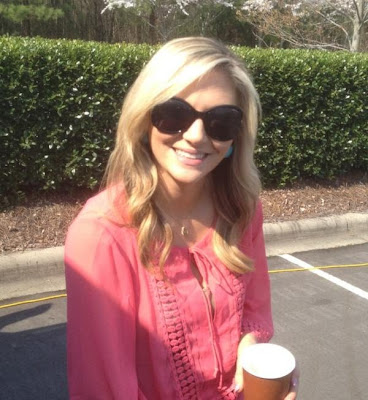 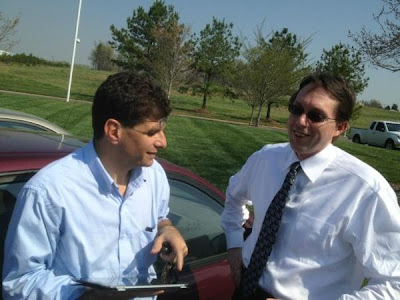 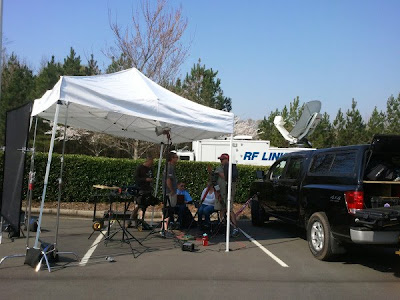 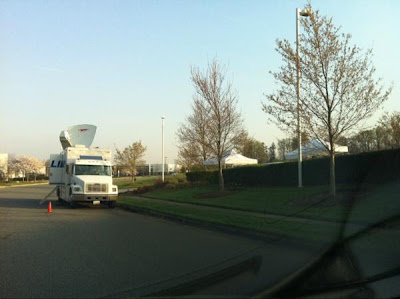 That is the scene this AM outside the NASCAR R&D Center in Concord, NC. Thanks to Bill Ferguson Jr. and Claire B. Lang for the pictures via Twitter. It is final appeal day for the #48 team from Hendrick Motorsports.

Update: Slightly before 4PM ET, the media was informed that the suspensions and points penalties give to the #48 team had been overturned in the appeal. The fines would stand, but this is a huge breaking story. Race Hub on SPEED is at 6PM ET.

Update 2:45PM - Rick Hendrick just left the R&D Center for a little fresh air and told the media a decision should be coming shortly. He did go back inside.

Update 2PM:Reporter Dustin Long passed along information that nothing has happened. No one has left the building and nothing has been announced in terms of a decision.

Update 12:15PM: ESPN just advised that the "NASCAR Now" show scheduled for 3PM on ESPN2 is being moved to the ESPNEWS network to make way for extended NFL programming focusing on Peyton Manning's move to the Broncos.

ESPN has a live truck there, but there is no information about doing cut-ins to SportsCenter if a decision comes down earlier than expected. SPEED has said no cut-ins, but they will use a sports ticker to pass along any information.

We will keep this blog post updated on news, information and happenings at the scene via social media. Happy to have your comments on this topic. 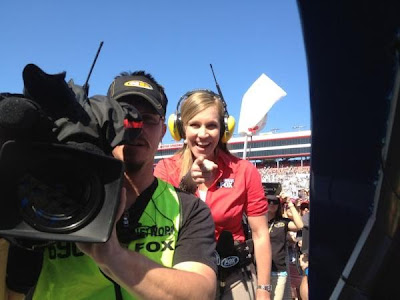 Rain stayed away and the Sprint Cup Series race on FOX started as scheduled. That was the good news.

Chris Myers started the show with Darrell and Michael Waltrip in the Hollywood Hotel. Driver intro's at Bristol were ignored until some replays were added late in the show. This has always been the case as the music being used for driver intro's would require FOX to pay royalty fees if used on TV.

The Waltrips clearly do not have the same chemistry in the infield that they displayed when calling several races last season on SPEED. The perspective of a crew chief like Jeff Hammond is fundamentally missed as instead two drivers from different eras express basically the same opinions.

Myers has finally dropped the "goofball" act and is directing on-air traffic like the TV pro he actually is in real life. He has his hands full with the freestyle ramblings of Darrell and the breathless excitement of Michael. So far, Myers has kept things in check.

When Darrell moves to the TV booth, he used to be able to free himself from Hammond and become the show. Now, he competes with Hammond in his roving reporter role and also has to deal with the spontaneous comments from Michael in the infield. It has proven to be a challenge.

Hammond takes time away from the pit reporters and his updates add content, but are not as focused and topical as what the pit reporters could offer. In the end, less information about the actual drivers in the race as it is happening is passed along to fans.

The big topic of our online live discussion during the race was FOX choosing to use "hyper-tight" coverage to only show one or two cars at a time in the segments. The network would focus on a battle or two, update the information and go to commercial. Several times, the caution flag waved and FOX chose to stay in commercial break.

Replays are the lifeblood of the FOX coverage. The tight shots mean that most of the issues and incidents that happen during the races are missed. It's just the nature of the coverage. That was again the case as replays updated almost everything since the live pictures were focused on a chosen car or battle.

Aerial shots of BMS and the wideshots from the tower that show the entire track were never used under green. FOX is locked into the philosophy of covering NASCAR just as tightly as they do with baseball and football. It is a choice.

Ratings were down for the last race, but nothing within this coverage changed. Even on a tiny track like Bristol replays under green were run full-screen and FOX often casually stepped aside from racing coverage for a wide variety of sponsored and special features. This even happened late in the race.

A double video box was used with 50 laps to go that framed two different battles. On this tiny track, it made no sense. Simply by zooming a camera out, both battles and the other racing could be shown with no technical gizmo's involved. The older style of opening up and letting fans see it all is long gone.

The network rolled-out the side-by-side commercial coverage at 3:45PM. Using this format for the entire race would have made for an entirely different fan experience. The irony is that FOX continued to cut cameras tight within the tiny video box in the side-by-side screen.

Mike Joy tried hard to generate excitement late in the race, but instead of racing action it was fuel mileage that was the issue. While the track and the racing has changed, it is the duty of the TV network to work hard to adapt to those changes and use the cars at speed to sell the race to viewers.

Ultimately, FOX had a nice little flurry of activity in the final 20 laps. The network used the standard finish line shot to show viewers the lead lap cars crossing the line and it was over.

Note: Thanks to Brad Keselowski's cell phone camera and Twitter account for the picture of Krista Voda calling him out of the car for his winner TV interview.

This post is for your post-race comments on the TV coverage. Please leave the track reconfiguration for other blogs. We are looking for your opinion on the TV coverage from start to finish. Thank you as always for taking the time to pass along your comments.