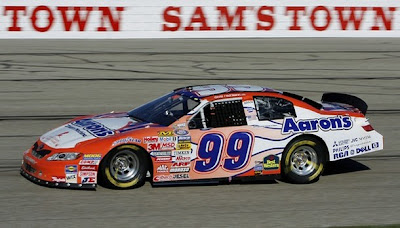 One quick zoom around the Internet will tell the tale. Over at NASCAR.com, the TV listing for the Nationwide Series race this Saturday in Memphis says ESPN Classic. Sliding over to ESPN.com, the listings expand to ESPN Classic and ESPN360, the online streaming service.

As veteran fans may remember, ESPN Classic is not a suitable network for NASCAR where distributing a live race is concerned. In a repeat of an earlier ESPN Classic situation, NASCAR turned to SPEED as a viable alternative. Already the home of the Craftsman Truck Series, SPEED agreed to simulcast the ESPN-produced race from start-to-finish.

Unfortunately, ESPN did not seem to get that message. Sunday on ABC, Allen Bestwick signed-off the NASCAR post-race show from Martinsville by promoting the Memphis Nationwide race as being only on ESPN Classic. NASCAR Now host Ryan Burr did exactly the same thing on Tuesday while viewers saw an on-screen graphic that also did not mention SPEED.

The TDP column that talked about that moment was called "ESPN Pushes NASCAR To The Back Burner." Click here to read that 2007 entry in its entirety. In the end, getting the Memphis Nationwide Series race on the air came down to a nice open-field tackle by a young man from the Iowa Hawkeye football team.

ESPN veteran Marty Reid and fan favorite Randy LaJoie provided the Memphis commentary last season and will do so again this weekend. Last year, Reid was unable to say even a word to the fans before ESPN pulled the plug. This year, the race broadcast will thankfully be seen from start-to-finish by most fans thanks to SPEED.

The other big benefit of moving this telecast away from the main ESPN networks is the post-race. In 2007, ESPN left immediately after the checkered flag without talking to the winner David Reutimann or explaining to TV viewers why some fans in the stands appeared to be crying. There was also a lot of emotion among the Reutimann pit crew.

Click here for the video that will explain the reason why fans and teams were so deeply affected by this victory. This follow-up report was put on-the-air by the NASCAR on ESPN crew several weeks later to apologize for the Memphis fiasco.

Again this year, the young patients at St. Jude's have designed the paint schemes on eight cars in the race. The Design A Dream program is being coordinated by Leverage Sports of Charlotte, NC. If that name sounds familiar, it should. That is the same company producing the Three Wide Life TV series. Click here for a link to that show.

ESPN has covered the Nationwide Series faithfully since February. SPEED has helped out as well, but the NASCAR on ESPN crew has put a lot of work into these telecasts. Often, the Saturday race is better produced and gets a much better reaction from the TV viewers than the Sunday Cup event.

This week Memphis is a stand-alone telecast with Rusty Wallace, Shannon Spake and Mike Massaro working hard and then boarding a plane back to Atlanta. Chances are it will be Rusty Wallace at the controls. Vince Welch will round-out the Memphis TV crew.

ESPN has a tremendous opportunity to make-up for last year with this telecast and with 50 cars trying to make the field it should be a fascinating mix of drivers and teams. Practice will be shown at 4:30PM on Friday and qualifying will be live on Saturday at 10:30AM. Unfortunately, both of those sessions will only be on ESPN Classic.

The Craftsman Truck Series race on SPEED at 1PM precedes the 3:30PM Memphis event, so NASCAR fans will get a nice double-dose of racing on Saturday.

Needless to say, the NASCAR Countdown pre-race show on ESPN Classic will not be carried by SPEED. If needed, SPEED will fill any time between events from the SPEED Stage in Atlanta and then join Reid for the call of the race.

Either way, the people in Memphis and the children from St. Jude's get a fair shake this year after a little cooperation between two key NASCAR TV partners.

The Daly Planet welcomes comments from readers. Just click on the COMMENTS button below and follow the easy instructions. The rules for posting are located on the right side of the main page. Thanks for taking the time to stop by.
Posted by Daly Planet Editor at 2:36 PM 28 comments:

To add your opinion to any of the topics above, just click on the COMMENTS button below. The rules for posting are located on the right side of the main page.
Posted by Daly Planet Editor at 10:51 AM 16 comments: