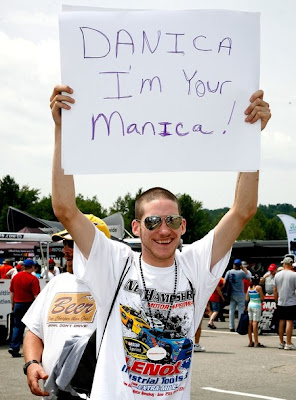 ESPN is chocked full of programming right now and none of it includes NASCAR. This weekend, the only time ESPN will be involved with the Nationwide Series is for the actual race coverage. Practice sessions and qualifying were carried by SPEED.

Allen Bestwick kicks-off the pre-race NASCAR Countdown show at 2:30PM. He will have Dale Jarrett and Brad Daugherty alongside in the Infield Pit Studio. Tim Brewer will be in the Tech Garage.

This is another Danica moment for ESPN. On Friday and early Saturday, SPEED completely downplayed Patrick's presence and treated her fairly but without favor. It should be interesting to see how ESPN approaches this topic in the pre-race and event coverage.

Jarrett will be moving upstairs to the broadcast booth and joining Marty Reid and Andy Petree for the race. Dr. Jerry Punch, Vince Welch and Dave Burns will be on pit road. Rusty Wallace, Shannon Spake and Jamie Little have the weekend off.

This is a flat track that is a test of patience and tires. The TV producer may be praising the double-file restarts and pit strategy before the day is done. In-car cameras work well because there is so little passing under green.

TV coverage on the caution flag pitstops is going to be key, as this is perhaps where the majority of the passing for position will be taking place. This has certainly been a key television issue in the past.

Once again, the familiar scenario may unfold where several of the Sprint Cup Series drivers could dominate. NHMS normally rewards the teams that start from the front of the NNS races.

This post will serve to host your comments on the ESPN coverage of the Nationwide Series race from New Hampshire. To add your TV-related comments, just click on the comments button below. This is a family-friendly website, please keep that in mind when posting. Thanks for taking the time to stop by The Daly Planet.
Posted by Daly Planet Editor at 1:30 PM 113 comments: