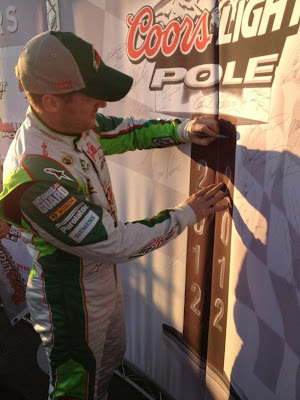 Dale Earnhardt Jr. is on the pole and the Sprint Cup Series is ready for some primetime action under the lights on national television. As most of you already know, the race tonight is on ABC.

The history of trying to serve four timezones with NASCAR has been problematic. Tonight, several markets will not carry the pre-race show but will join the coverage before the start. Local stations have established newscasts and also previous programming commitments.

Here is the list of markets where the NASCAR Countdown show will be preempted:

Meanwhile, WPVI in Philadelphia will be showing “Inside the Eagles” but will carry Countdown on its D2 channel, then switch to the race at 7:30 p.m. ET.

The reality check amid all of this is the event possibly running long or being delayed by rain. In the past, some ABC stations have left NASCAR in the closing laps in order to begin their late local news on time. Hopefully, this situation has been addressed.

Weather is a factor and the scenario for tonight's race to go hours longer than scheduled is very real. There is live college football in progress on ESPN, but SportsCenter is on ESPN2 from 10:45PM through 1:30AM Eastern Time. Look for that network to get the NASCAR switch should things run very long.

In the event of the race being postponed until Sunday, it would run in the afternoon against NFL football. ESPN's flagship NFL Countdown show ends at 1PM ET, so perhaps NASCAR would take over ESPN at that time as the network is in replays for several hours. On Sunday afternoon, ESPN2 is contractually obligated to coverage of US Open tennis.

We will be hosting our usual live stream on Twitter using the #TDP1 hashtag for TV and media comments about the race coverage. Please join us, as Twitter is easy to use and provides instant communication. You can check twitter.com/thedalyplanet to start putting your customized NASCAR timeline together.

After the race, there will be a new post for your comments. Friday night, the crowd was small and looked awful on TV. Hopefully, tonight will provide a much-needed spark for the sport and get the fan interest back in gear as NASCAR heads down the stretch. Thanks to Team Hendrick for the picture of the pole winner.

We invite your opinion on this topic. Comments may be moderated prior to posting.
Posted by Daly Planet Editor at 1:24 PM 13 comments: