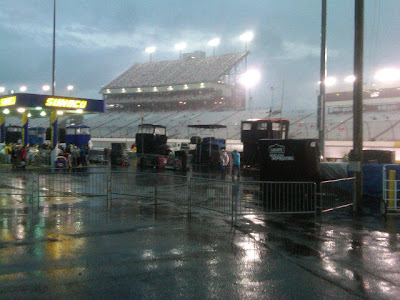 Mother Nature made it a challenge, but the race finally got underway from the Richmond International Raceway. Rain was responsible for a very late night for most fans as the race ended well after 1AM Eastern Time.

Nicole Briscoe had Rusty Wallace, Brad Daugherty and Ray Evernham in the Infield Pit Studio for the NASCAR Countdown pre-race show. A weather-delayed college football game meant that much of the country saw football and not NASCAR for about an hour or so. Eventually, all the ABC stations joined NASCAR before the race started.

Allen Bestwick had Dale Jarrett and Andy Petree alongside in the TV booth. Dr. Jerry Punch, Vince Welch, Dave Burns and Shannon Spake were on pit road. NASCAR started the race under green/yellow and after TV went to commercial the five to go signal was given. ABC stations just got back when the actual racing got underway. It was that kind of night.

Carl Edwards made his mandatory appearance in the Infield Pit Studio. Kevin Harvick and Jeff Gordon also stopped by during rain delays. Briscoe has become an expert at directing traffic and keeping her three analysts on a short leash. Having a sense of humor certainly helps that cause.

ESPN has a formula for racing and we saw it again. Tight shots, in-car cameras and lots of graphics are the order of the day and have been for years now. The broader perspective is sacrificed, even on restarts and races for position. It seems to be all about trying to make things exciting rather than just showing the race.

The good news is that split-screens were used for most green flag pitstops, the network held a commercial for a caution flag and despite the long night there were no technical problems from the track. ESPN has also started to show the lead lap cars finish and get away from the "drama" shots of just the race winner.

Allen Bestwick has been stellar this season and was again from Richmond. His eye for detail, understanding of the sport and knowledge of those involved is second to none. He has made Jarrett and Petree better this season and perhaps Bestwick may be included in planning the production philosophy for the upcoming Chase races.

This next stretch of races has been the Achilles Heel of ESPN's coverage. Trying to follow the Chase, show the race and keep up with the information flow from both has not gone well. This year ESPN has an opportunity to produce the races, let the Chase points fall as they may and use Bestwick as the face of the franchise. It just might be the combination the network has been chasing since 2007.

We invite your opinion on the ESPN coverage of the Sprint Cup Series race from Richmond on ABC.
Posted by Daly Planet Editor at 6:00 AM 20 comments: