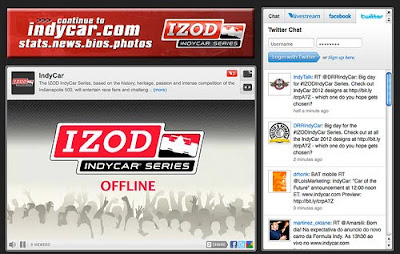 There used to be no better example of a professional racing series that offered an outstanding online streaming version of its events than IndyCar. Practice, qualifying and races were all made available worldwide on the sanctioning body's website in 2010.

While major sports like the NFL, MLB and NHL all have sophisticated online streaming packages available to fans, motorsports has lagged behind. The biggest reason is the complicated world of programming contracts that often result in a clash between television and Internet rights.

After being unceremoniously chopped into pieces by ESPN several years ago, the remaining IndyCar television package took refuge at VERSUS. At the time, that obtuse network was a chaotic mix of sports, paid programming and reality TV. Now, things have changed.

The network's owners, Comcast, have essentially bought NBC Universal. Suddenly, IndyCar is in a whole new world. Comcast brought in some heavy hitters as executives for NBC Sports, the Golf Channel and VERSUS.

Needless to say, VERSUS has lowered the boom. There will be no streaming of any content from the 12 events on VERSUS in 2011. No practice, qualifying or races. Currently, there are no published plans for the other five races to get any online exposure from ESPN.

IndyCar is an international series featuring drivers from all over the world. The fan base is truly global. VERSUS does not even distribute its TV signal across the border into Canada or South America. Reaction has been swift.

"This would be the most significant step backward in the last twenty years of IndyCar," said the Disciple of IndyCar blog.

"The main problem is how it affects international viewers, especially in Canada, the UK, and Australia. That’s a serious issue and I honestly don’t know what the solution is," said the Triple League Racing blog.

"Way to kill the fairly big international audience the series has. I used to watch every session when I had the chance. Now I have to miss practice and qualifying and watch an illegal stream of the race. My passion for IndyCar just dropped by a mile," said Miguel from the Netherlands on TrackForum.com.

While the NBC/Comcast senior management team says this move is designed to drive viewers to VERSUS and raise ratings, that statement flies in the face of reality. It's not the potential erosion of American fans who choose a laptop over VERSUS that is the issue. It's the international fan base and ultimately perhaps the very survival of the series.

Comcast/NBC lawyers may be well within their rights to force this move, but VERSUS does not carry a significant amount of the content that was being streamed live. In fact, VERSUS and NBC have not even suggested that any IndyCar online content might migrate to an NBC-owned website on a subscription basis. Instead, it is simply being ended.

In 2011, this is a tremendous example of the clash between the traditional American television model of sports programming and the reality of online streaming. IndyCar races on ABC or ESPN other than the Indy 500 drew less than one million viewers. The numbers from VERSUS were nothing short of pathetic. Less than 400 thousand viewers per race.

Instead of seeing the online environment as a problem, the only pathway for IndyCar is to use the existing online fan base to spread the IndyCar message on a global scale. VERSUS and NBC have no stake in IndyCar. It's up to the sanctioning body to get across the table from the TV folks and determine what Internet strategy can benefit both parties.

Perhaps, just one more season of online streaming as the new VERSUS executives settle in and get a feel for the racing landscape may be a workable solution. Better to count the legal viewers worldwide on an official live stream than force international fans to resort to illegal Internet sites for the races.

It would be a crying shame to have part of the new VERSUS legacy become the death of IndyCar. Unfortunately, that is a very real possibility if the current distribution plan stays in place. It's time for some crisis management and folks with knowledge of the bigger picture to step-up and save the day.