Your Turn: NASCAR On FOX From Darlington 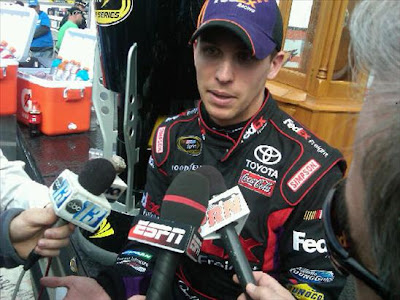 Well, it certainly was a long day's journey into night. The Sprint Cup Series night race at Darlington kicked-off with the Hollywood Hotel at 7PM and ran for more than four hours on FOX.

Chris Myers started the telecast with a 30 minute pre-race show. Darrell Waltrip and Jeff Hammond joined him for updates, news and comments. Mike Joy took over the call of the race with Waltrip and Larry McReynolds. Krista Voda, Steve Byrnes, Matt Yocum and Dick Berggren were the pit road reporters.

The Cup Series did not experience the tire blowout problems that plagued the Friday night Nationwide Series race on ESPN2. Instead, the racing was good with passing into the corners and at the end of the straights.

FOX started with energy and focus. Mike Joy was energetic and called the action on the track. After using a lot of cameras and following the action, the familiar FOX routine returned. Tight shots of one or two cars mixed with in-car cameras became the order of the day. Late in the race, FOX showed us that the DirecTV blimp was above the track. This perspective was rarely used and really missed.

The best pit reporters on TV were used sparingly with no field rundowns and regular updates. Instead, FOX took a page from ESPN and used endless in-car radio replays.

This is just a post to let you offer a race recap of the TV coverage from your perspective. To add your opinion on the NASCAR on FOX telecast, just click on the comments button below. Thanks for taking the time to stop by.
Posted by Daly Planet Editor at 12:05 AM 51 comments: