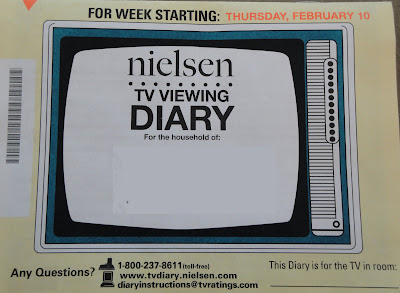 This past Sunday, ESPN's coverage of the Sprint Cup Series race from the Texas Motor Speedway attracted 4.7 million cable TV viewers. The TV rating number attached to that is a 3.4 Household coverage rating. To most NASCAR fans, that doesn't mean a lot.

As Sprint Cup Series TV ratings trended up late this season, some folks tried to tie the network covering the events to the increase. The suggestion was that a higher rating was the result of good production of the race itself. While that might be good in theory, it has little basis in reality.

NASCAR TV ratings are simply a scientific method of trying to measure the number of viewers or households that tune-in to a live sports event. The Nielsen Media Research company is the primary source of audience measurement information in the US.

The term "Nielsen rating" is the number that results from a combination of set meters, devices attached to TV's that record viewing habits, and actual viewer diaries completed by selected households. That is a viewer diary pictured above.

Click here to view the Nielsen website and get updates on the company trying very hard to use updated technology to chase more accurate ratings. Click here for an article from TV industry website Splitsider about just how off-base the entire ratings system may be in today's world.

Sprint Cup Series TV telecasts are exclusive. That means that NASCAR has delegated only one TV network for each race. In other words, the only TV choice for NASCAR fans is to tune-in to the designated network or not.

Three TV networks cover the points races in the Sprint Cup Series. FOX, TNT and ESPN combine to produce hundreds of hours of racing from venues across the country. Each network has its own approach to NASCAR and distinct style of producing sports telecasts.

FOX is over the top with hype. Darrell Waltrip is everyone's big brother, dad or grandpa depending on the age of the viewer. "Ole DW" will hype anything for money. Digger, the COT and even pothole repairs at Daytona have all received that treatment. Who can forget the many years of DW pushing the fact that Digger t-shirts were available at the DWStore.com website. All of that while the race was under green, of course.

FOX leans heavily on a corps of pit reporters and analysts who are TV heavyweights. Steve Byrnes and Krista Voda could easily interchange with Mike Joy and Chris Myers. Larry McReynolds and Jeff Hammond work every weekend on the NASCAR trail and earned their stripes. Waltrip's "act" works because the other FOX personalities can deliver the goods.

TNT banks on being the irreverent partner. Kyle Petty is encouraged to voice his not politically correct opinions while Wally Dallenbach is basically a NASCAR outsider. Adam Alexander is still new in his position while the veteran pit road reporters enjoy snarky inside jokes as part of the telecasts.

The Turner agenda is not about NASCAR. TNT's six races are simply a vehicle to promote the Turner cable TV networks programming line-up. Veteran viewers still cringe at Bill Engvall Show mentions and the fact that Kyra Sedgwick was The Closer is permanently burned into many brains. The racing might be fun to watch, but for TNT the goal is network programming promotion.

ESPN is a mess. Five years into the current Sprint Cup Series TV contract the lead announcer has been changed three times. The original producer was arrested, fired and never returned. The telecasts are as dry as toast and through it all Tim Brewer is still explaining that roof flaps don't let the cars flip over.

While ESPN is good at hype and promotion, this network's agenda is quite clear. It is an approach the executives call "storytelling." Topics are addressed in the pre-race show and then reviewed throughout the telecast. Rather than strictly focus on the race, ESPN continually goes back to a script it prepared and faithfully sticks to it.

These three NASCAR TV partners don't speak to each other, don't particularly like each other and are owned by major corporations in direct competition with each other. To say that a change in ratings is tied to the TV production by these three parties just does not fly.

The only storylines fans want are the ones that concern the racing on the track and the personalities of the drivers. Rivalries, feuds, danger and fast cars bring Americans to the TV set. No one cares if Joy, Alexander or Allen Bestwick is calling the lap as long as cars are at speed, the racing is good and a feud is boiling over.

The fundamental stance we have maintained since 2007 was that the role of TV in NASCAR is to simply show the viewers at home exactly the same thing the fans in the stands are watching. Click here to read the "NASCAR TV Bill of Rights" complete with some sensational reader comments.

Fans in the stands are watching the best racing on the track among the lead lap cars regardless of position. The current Sprint Cup Series TV partners have never gotten that message. FOX loves Junior, TNT loves themselves and ESPN loves Carl Edwards. It's a pretty simple equation.

The Sprint Cup Series races have been on TV since the early 1980's. The original idea was to simply point cameras at the racing and let announcers describe the action on the track. Fans tuned-in and the sport grew. Rivalries, danger and speed made the telecasts.

Today the Sprint Cup Series car, fuel mileage races and aero tracks with little passing have altered the dynamic that originally attracted TV viewers. It's a different product on the track. Tire choices on pit road have replaced the chrome horn. The race off pit road is often the key to the win.

Solid TV production is important, but ultimately NASCAR TV ratings are driven by the product on the track. That is one reason we have tried to maintain a healthy distance from the ratings numbers as they came and went over the last five years.

Holding the current NASCAR TV partners to a high standard for TV production, good information and balanced reporting is still our goal. Throw in a good product on the track and a mix like that is ripe for the return of the fan base that the sport saw a decade ago when TV ratings were through the roof.

We invite your comments on this topic. To add your comment, just click on the comments button below. Thanks for taking the time to stop by The Daly Planet.