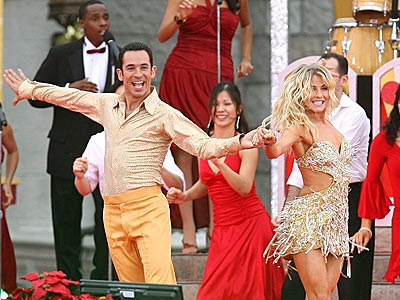 Never has the quandary that ESPN often finds itself in where motorsports are concerned been more evident than Wednesday afternoon. ESPN is now into the third season of the daily NASCAR Now series without as much as a once a week program focused on other motorsports.

The good old days of John Kernan and his daily dose of RPM2Night are long gone. ESPN is still deep into the NHRA and only recently stepped aside from the IRL scene. Formula 1 is making news, the 12 Hours of Sebring was just last week and the AMA season is in full swing.

Unfortunately, none of those stories ever show up on SportsCenter or ESPNEWS. Perhaps, when the drivers in those series learn to tackle, bunt or perfect a fade away jumper they too might break into the great and mighty stick-and-ball highlights machine.

This left ESPN the Magazine reporter Ryan McGee at loose ends. McGee has been in Florida covering the criminal trial of IRL fan favorite Helio Castroneves for tax evasion. With the trial winding down and the facts on the table, McGee was ready to tell the TV viewers all about it. There was just one fundamental problem.

In order to do that, he would have to call Dave Despain over at the SPEED network. Wind Tunnel is the only general motorsports interview show still standing. Fans may remember that Wind Tunnel, just like NASCAR Now, started as a daily show and was axed to once a week a while back.

Leave it up to ESPN to solve the problem the old-fashioned way. They would just lead the Wednesday version of NASCAR Now with McGee and the Castroneves story. The key to making all this work would be for McGee and host Mike Massaro to just say the word "NASCAR" a whole lot. That is exactly what they did.

Castroneves may have danced with the stars and driven a mean IRL machine, but he has absolutely no direct connection to NASCAR. He was alleged to have kept money paid to him off-shore to avoid taxes. It was cut and dried.

Names like Roger Penske and Sam Hornish Jr. were used a lot. One of Castroneves co-conspirators is a lawyer with some NASCAR clients. Penske and Hornish were not alleged to have done anything wrong. The lawyer, however, could be in big trouble.

McGee's normal challenge is to compose a good article for ESPN's magazine and website, which he normally does quite well. On this Wednesday, however, his biggest challenge was to explain why an IRL driver's tax problems were the lead story on NASCAR Now. The explanation was not very convincing.

Thank you for taking the time to read The Daly Planet.
Posted by Daly Planet Editor at 5:00 AM 29 comments: 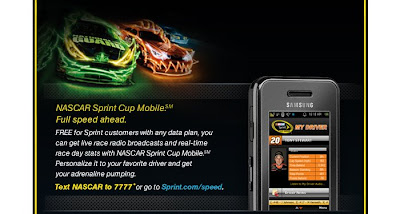 There has always been a loud knocking on the NASCAR door when it comes to providing more behind-the-scenes coverage of the sport. Since SPEED basically eliminated the remaining weekly TV shows that used this type of footage, there has been almost no exposure for the fans of what happens during a race weekend "on the inside."

This content has proven to be quite popular when used in programs like the now cancelled series NASCAR Confidential, Beyond the Wheel and 7 Days. With little opportunity to break SPEED out of the "lifestyle" mode and with ESPN jammed full of stick-and-ball content, Sprint is using in-house technology to offer some exclusive NASCAR behind-the-scenes content.

In the new world media order, the Internet and cell phones can now compete with TV networks in many ways. This May, SPEED will once again televise the All-Star race from Lowe's Motor Speedway. This year, Sprint has decided to offer live coverage of the sometimes rowdy driver's meeting before the race.

This sounds like a lot of fun, but there are some issues. There will be no video as those rights are already owned by another party. There will also be no online streaming as, you guessed it, those rights were long since sold to a third party.

The only thing Sprint can do is make the audio available to cell phone users, which is still an interesting proposition. The ability to simply dial into the driver's meeting is brand new and perhaps something that can be done for future events.

Unfortunately, Sprint has taken a rather short-sighted approach to this project. This special offering will only be made available to current Sprint users who have signed-up for NASCAR Sprint Cup Mobile. This is Sprint's service that offers NASCAR content like race broadcasts, in-car audio and news.

Rather than offer it to anyone with a cell phone to show-off what Sprint Cup Mobile can do, only those already paying for the service can get the driver's meeting. This is a great example of simply servicing an existing audience rather than exposing a new one to what is a great product.

"The NASCAR Sprint All-Star Race has long been considered a signature event for the sport and we have partnered with SPEED to ensure fans can watch the race regardless of their location," said Sprint executive Steve Gaffney. "The latest advancements with NASCAR Sprint Cup Mobile are an excellent demonstration of how the Now Network can instantly put the world of NASCAR at our subscriber's fingertips."

The only problem with Mr. Gaffney's comments is that he is only putting the technology at the fingertips of those who already have it. For the rest of the cell phone users nationwide, the opportunity to hear this special event will not exist.

At a time when NASCAR desperately needs as much exposure as possible, perhaps Sprint will use the company's technology to make this interesting NASCAR offering available to any cell phone user and then let them decide if Sprint Cup Mobile is a product worthy of further investigation.

Thank you for taking the time to stop by The Daly Planet.
Posted by Daly Planet Editor at 4:30 AM 22 comments: