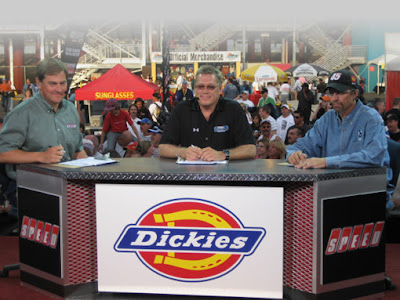 It has been a very interesting year for Kyle Petty. Among the aspects of his life that we are curious about is his active involvement in the television side of NASCAR.

He drew solid reviews from fans and the press for his honesty and candor during TNT's summer race package. As usual with high profile individuals, he also had his share of detractors. Welcome to the wonderful world of the media.

This season The Daly Planet has watched every episode of Tradin' Paint, the thirty minute opinion-based talk show on SPEED. Our column of April 4th was entitled "Tradin' Paint, the show that ain't." The bottom line was that this show had lost its focus, and needed correction.

The premise of the series is simple. John Roberts hosts, and tosses out the topics to his two guests. The panel consists of one driver and a weekly rotating cast of media members. They can be from the print, TV, radio, or even Internet sides of the media world.

The original driver position was filled by Michael Waltrip, but SPEED made a change earlier this season. Kyle Petty committed to this series for the entire year, and he has made an immediate impact. Always plain-spoken, Kyle has mellowed with age into a veteran driver and owner with a good perspective on the sport in general.

Last week, Bob Pockrass from NASCAR Scene basically baited Kyle into blowing his top. It made for good TV, and included Kyle telling Bob he was full of BS and blowing smoke up the fans posteriors. This week, Tom Jensen from SPEEDtv.com proved to be a much better chat partner.

As most fans know, Kyle was playing injured after breaking his hand during an angry moment last weekend. Something hard met something human, and the human side lost the battle. No one would have blamed Kyle had he taken this weekend off, but give him credit. He showed up, and talked about his injury right off the bat.

In front of a big crowd at Michigan, Kyle proved that he certainly has come into his own in front of the camera. Commenting on the Dale Junior vs. Theresa issues of the week, he said that "the number eight needs to stay at DEI." Petty pointed out that "Dale Senior chose that number for that company and not necessarily for his son." There is a point you have not heard in the mainstream media a lot.

Jensen piped-up with his comment that since Theresa Earnhardt did not let Michael Waltrip exit DEI with his fifteen number, no one should have been surprised that she made it impossible for Junior to take the eight. Petty added "it would be like the (NFL) Redskins letting a player go, and still letting him wear the decal on the side of the helmet." Interesting perspective from a team owner.

On the subject of Kyle Busch and the Gibbs organization, Jensen said that Gibbs Racing is now "like the Oakland Raiders." They are a group that has learned to live with dysfunction and strong personalities. Kyle was firm in his statement that "Kyle Busch will make Tony Stewart and Denny Hamlin better race car drivers."

Petty's point was well-taken that Busch will be coming on-board wanting to prove he is just as good or better then Stewart and Hamlin. Cohesive was the key element that Petty pointed to as crucial to the future. Both alluded to the fact that back at the Gibbs shops, no one wears the individual car colors and everyone is made to feel part of one big team. There were lots of Redskins references.

From the start of this series, John Roberts had been directing the traffic and asking the questions. Over the last several weeks, he has also been making his views known, and expressing in his questions a lot of opinions that originate from the NASCAR fans. That is really what is missing in this show, and in other SPEED programming. The voice of the fans on NASCAR TV is silent.

In wrapping the show, Petty expressed the fact that the Michigan race would be about caution for some, especially the teams trying to either keep, or make, The Chase. He explained that teams have control at Michigan, but for some of these same teams, Bristol next week would be "a life changing experience."

Certainly, if anyone should know about life changing experiences, it is Kyle Petty. This one man has dealt with tremendous fame, personal loss, and now the challenge of building a second career to follow his driving days. Like many other things, he has stepped-up and given it his best effort.

I would enjoy seeing Kyle guest on Inside NEXTEL Cup, or co-host an edition of WindTunnel with Dave Despain. SPEED would be smart to offer him additional guest roles this season, in advance of someone like ESPN coming along and moving him into the Infield Studio to support Suzy Kolber.

Tradin' Paint has slowly proven to be a show worthy of a weekly view, and with a little better time control of the topics, it could cover a whole lot more ground. It will be interesting to see what SPEED does with this program for 2008.

The Daly Planet welcomes comments from readers. Simply click on the COMMENTS button below, or email editor@thedalyplanet.tv if you wish not to be published. Thanks again for taking the time to stop-by.
Posted by Daly Planet Editor at 2:49 PM 9 comments: