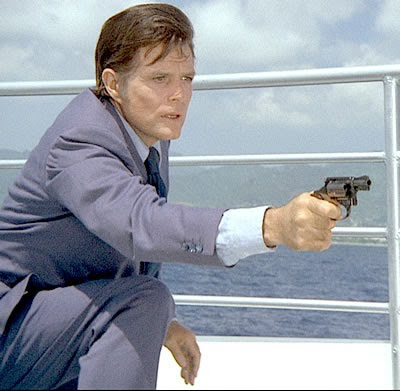 His stare could strike fear into the hardest criminal. His hair defied gravity. Detective Steve McGarrett pushed his men to solve every crime and made it personal. Once the arrest was made, it became official with the phrase that became a part of our vocabulary. "Book'em Danno!" he would say.

It takes a veteran like McGarrett to solve the mystery of why fans at home cannot see their drivers. Why fans cannot get updates on all the drivers in the field over a period of three hours. Why tight shots and in-car cameras do not show the actual racing that takes place. That's right, McGarrett is taking on the NASCAR on FOX bunch.

There was no outdoor pre-race set for this race, so the Hollywood Hotel served as the launching pad for Darrell Waltrip. Chris Myers questioned Kyle Busch and Kevin Harvick about events from last week but neither one broke. Jeff Hammond tried to add his opinion, but instead Waltrip got "Revved Up" about the lack of sportsmanship in NASCAR and drivers crossing the line and spinning others out.

Mike Joy joined Waltrip and Larry McReynolds for the race call. Steve Byrnes, Krista Voda, Dick Berggren and Krista Voda were on pit road. The weather only caused a slight rain delay under caution but never stopped the race.

FOX continued to beat the Harvick vs. Busch drum until the green flag. Of course, nothing happened between those two drivers in the event. Instead, the story was the build-up of rubber on the track and the total lack of actual side by side racing.

Late in the race, FOX ran a side-by-side national commercial break without saying a word in advance or after the fact. There had been no advance publicity about FOX trying that and it will be interesting to follow that up and figure out what went on in the TV truck.

The FOX style is well set. Tight shots, in-car cameras and covering the incidents of the race through replay. Jumping from car to car just drains the excitement out of any event. This was no different. The pit reporters faded down the stretch and no crew chiefs were interviewed after caution flag pit stops or for strategy discussions.

FOX takes a break and SPEED produces the All-Star race next. This post is intended for you to offer a TV race wrap-up of how you felt the coverage was from Dover. To add your opinion, just click on the comments button below. This is a family-friendly website, please keep that in mind when posting. Thank you for stopping by. 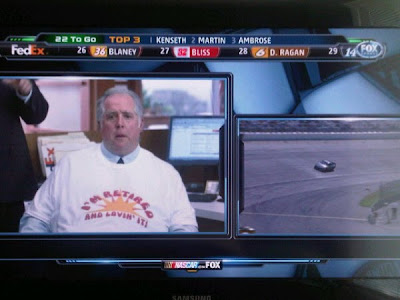 The discussion continues after the little surprise added to the FOX production of the Sprint Cup Series race from Dover. Without warning or mention, the same type of split-screen or "side by side" commercial viewers see in the IndyCar telecasts appeared on FOX. That is a screen-capture above.

Later that night, a FOX spokesman told reporter Dustin Long of hamptonroads.com that this was a concept that came up in discussions last week. Veteran readers of TDP know that it is actually a topic that has been on the table for more than five years.

Regardless of the overall quality of the telecast, the biggest hurdle for NASCAR in this new TV contract has been commercials blocking the racing action. It's nothing new, but the situation is now compounded by two key elements.

First, the networks run lots of inventory to pay-off the rights fees they paid to NASCAR. This was the most lucrative TV contract in NASCAR history and what fans see as they sit through commercial after commercial is FOX simply paying the bills.

Secondly, the communication choices available to NASCAR fans now go far beyond the race. Immediately after the live event, there are countless review shows on SPEED and ESPN that replay and detail the happenings in the multi-hour race. It's a lot easier to watch a one-hour review show that has all the highlights and soundbites.

The elephant in the room is the Internet. A growing number of fans on Twitter and Facebook are interested in being actively involved with others during the telecasts and that has put the spotlight once again on the fact that about one-third of the laps are covered by commercials in the Sprint Cup Series.

When a commercial begins, NASCAR fans flee. This new generation of NASCAR fan does not want "play interrupted" for a commercial. It does not happen in professional football, baseball or hockey. Only NASCAR has live action or "play" interrupted by commercials every four or five minutes.

It's not quite clear where the push to try this new approach came from, but it's getting even more interesting. The Monday NASCAR Fan Council survey that went out to members of that panel contained specific questions about the single split-screen FOX commercial break.

In fact, the email even contained the video of the entire commercial. Fans were asked how they liked it, if they remembered the advertisers and what effect that commercial format had on fan's attitude toward those sponsors. Needless to say, the fans we chatted with were all for it continuing.

The NASCAR on FOX gang has a little break while SPEED handles the All-Star race, but when the monstrously long Coke 600 rolls around, it will be interesting to see if more of the commercials are presented in this style.

It's very clear from the flat TV ratings that change is needed. If this move by FOX late in that network's season can help TNT and ESPN to embrace this format, then it's certainly worthwhile.

We want your comments on this topic. To add your opinion, just click on the comments button below. This is a family-friendly website, please keep that in mind when posting. Thanks for taking the time to stop by The Daly Planet.