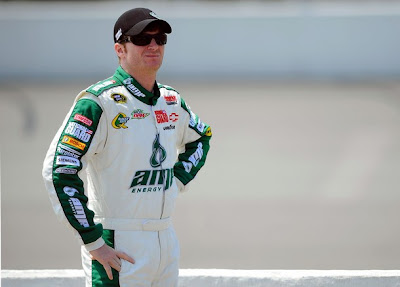 All eyes are on Junior as he continues to try and save the sport with yet another top five finish. NASCAR is painfully aware of what is about to happen in a couple of weeks when the NFL season starts. Football is going to lower the boom once again.

The Watkins Glen road course offers the sport an opportunity to put on a good show with some emerging storylines. Nicole Briscoe will host the pre-race show with Rusty Wallace, Brad Daugherty and Ray Evernham alongside. There is no Tech Garage with Tim Brewer, which is a shame because this is one of the tracks where his explanations of changes made to the Cup cars made a lot of sense.

Allen Bestwick is having a strong season, but has been dragged down time and time again by poor production choices. The ESPN team pushes the fundamental aspects of the sport aside to trick-up the TV coverage with in-car cameras and tight shots of high-profile personalities.

Bestwick will be joined in the TV booth by Dale Jarrett and Andy Petree. While Petree continues to voice the same type of strong comments he has voiced for the past five seasons, Jarrett is the polite and politically correct presence who adds supportive comments but rarely steps out with bold statements.

Since Jamie Little had her baby this week, it will be Mike Massaro joining Dr. Jerry Punch, Vince Welch and Dave Burns on pit road. This group should get quite a workout as the road course strategy is completely different from the oval tracks. Look for lots of comments on the challenges to the pit crew with the cars pointing the opposite way from normal on this course.

"Back cutting" is the term used when the director leaves the leaders and moves back in the field to catch some good racing. On an oval, this is easy. On a road course, with cameras strung out around the track, this is anything but easy. Trying to keep track of several different racing groups as the move through the camera positions is tough. Keep an eye on how often this happens live vs. how often replays are used to show cars other than the leaders.

As opposed to many tracks on the circuit, Watkins Glen has the risk of serious accidents. Over the past several seasons, there have been some hard hits and this year there are some changes to the track in reaction to those incidents. Look for the TV team to point out those differences as the race goes on.

This is perhaps the final race for ESPN before the familiar "Chase hype" begins. The chaos of the road course does not lend itself to inserting endless graphics about the season point standings. Hopefully, today is a breath of fresh air for ESPN and lets things get back on track before the real grind begins.

We live blog the race on Twitter using the #TDP1 hashtag. Twitter is free, easy to use and takes only minutes to load and set-up. Happy to take your comments here, but if you want to be in the action with the teams, officials and media come on over to Twitter and have some fun.

There will be a new post up once the race is done for your comments.
Posted by Daly Planet Editor at 10:02 AM 9 comments: