Kuselias Goes To Radio And "NASCAR Now" Goes To Heaven 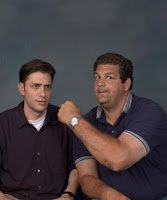 Friday began for a lot of sports fans like myself by checking out Mike and Mike on ESPN Radio. This program is also broadcast on ESPN2, which I was watching. With co-host Mike Greenberg on vacation, the Friday show turned to a sports radio veteran to step-in. His name is Erik Kuselias, and he is the full time host for NASCAR Now on ESPN2.

That same morning in California, the inspection process for the NASCAR NEXTEL Cup cars took place in Sonoma. Shortly thereafter, news began buzzing through the pits that over in "template land," all hell was breaking loose. There were two cars parked without inspection stickers that allowed them to race, and they had the numbers twenty-four and forty-eight.

Mike Golic is well-spoken, but he is no match for Mike Greenberg. Meanwhile, Greenberg is great on facts while Golic is great on common sense and "reality." Their differences make them a good radio show, and the fact that they like and respect each other as friends really closes the deal for listeners.

Erik Kuselias was already wearing thin on Mike Golic one hour into their program together. Kuselias had turned everything Golic said into a debate, and would not let anything just "slide by" as conversation. In talking about football teams, Pacman Jones, and player behavior, Kuselias was on a roll. Anyone who watches or listens to the show regularly could tell that things were coming to a head. Golic was steamed.

With Kuselias on the radio and TV with Mike and Mike, ESPN News Anchor Ryan Burr stepped-in for his second NASCAR Now show of the week. Little did he know one of the "new" top stories of the year was brewing on the West Coast. Burr had delivered a great Thursday show, but the last segment was ruined as the program aired, and ESPN was unable to fix it for the East Coast. For Burr, Friday was going to be memorable.

Erik Kuselias was pointing at Mike Golic. Kuselias was yelling about all kinds of things like personal responsibility, NFL players as adults, and being accountable. Golic was trying to be realistic in that the "new breed" of players in the league needed some sort of "assistance" to stay out of trouble.

The problem was, Kuselias kept telling Golic he was "wrong." In a radio talk show anyone can have an opinion. When that opinion is being expressed by a former NFL player who the show is named after, a substitute host might consider a little understanding. Not Kuselias. No friendship here and no respect.

NASCAR had made a decision. They were going to park the points leader and his wingman for practice and qualifying. Both of them had presented illegal COT cars and could start from the rear of the field...if the changes they made Friday after inspection allowed them to pass. If not, no racing. The bombshell had exploded.

There was steam coming out of Mike Golic's ears when he turned to Erik Kuselias and said "you're a lawyer." Golic continued that as a lawyer, Kuselias could "spin things anyway he needed to for a client." Golic said it didn't make any difference what reality was, or what people actually needed, that Erik Kuselias could say anything at anytime as long as he had the need. Kuselias looked at Golic with an arrogant smile and said "I'm not above that."

I reached up and changed the channel. I was as done with Kuselias on Mike and Mike as I was on NASCAR Now. Sports TV does not need to be mean and argumentative to get points across to viewers. If that is the format the people like on some sports radios shows, that's fine. As many readers have told me, that is Kuselias strong point, battling callers and stirring the pot on radio.

Ryan Burr and his crew took to the air with NASCAR Now and slammed a thirty minute NASCAR show on the air that viewers could watch each and every day. Burr hit the big story, then went directly to Marty Smith in California for a live update. Smith laid down the details not only about the inspection issue, but potential penalties that could come down next week.

Bob Holtzman was the ESPN "pool" reporter this week, and he updated the Hendrick story with good driver comments from Sonoma. Richard Childress had great words about the urgency to keep things under control with the COT, or go right back to the incredible expense and exotic parts that currently rule the Cup circuit.

Holtzman continued with an interview of Terry Labonte who was returning to NASCAR under rather questionable circumstances. In the only glitch of the show, Holtzman showed that "pool" reporters like David Amber or Wendi Nix often miss the NASCAR stories because of their lack of racing knowledge. Labonte's return was causing hard feelings up and down pit road. He is back to use his champion's provisional if he does not make the race on time, and guarantee Michael Waltrip's car into the event.

Burr lead Tim Cowlishaw through the mandatory sales feature of "driver pick'ems," and also ran a video advancer on Sonoma edited by the NASCAR Now production staff. There were no technical problems with this show, and it seems that ESPN's on-air issues are long gone.

With Allen Bestwick in Milwaukee doing double-duty hosting NASCAR Countdown and the ESPN Busch Series race, fans like to settle for the next best thing in Ryan Burr. His on-air presentation is excellent, and his knowledge of the sport is solid. Why he has not migrated to this program full-time is anybody's guess.

It is now about a month before ESPN leaves the friendly confines of the Busch Series, and steps-up onto the main stage of NEXTEL Cup. They will be the face of NASCAR for the entire "Chase for the Cup," and NASCAR Now will be their news outlet. This is the time to make the changes needed to allow both the live racing and the daily news show to shine like the network envisioned when they began planning.

ESPN has already released Doug Banks and brought-in Ryan Burr. Last week, they allowed Mike Massaro to step-up and host NASCAR Countdown. This week, Allen Bestwick hosts Countdown and calls the action in the Busch race. We know change can occur, and hope ESPN uses this four week period before "The Brickyard" to continue these positive efforts. When the national spotlight begins to shine in July, everyone on the air had better know their NASCAR...everyone.

The Daly Planet welcomes comments from viewers. Simply click on the COMMENTS button below, or email editor@thedalyplanet.tv if you wish not to be published. All email is confidential, and thanks again for stopping by.
Posted by Daly Planet Editor at 11:32 PM 6 comments: