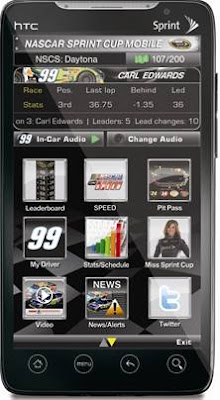 Another slow step by NASCAR toward joining the modern world of technology was announced this week. Sprint will make the six in-car camera views that fans can see on NASCAR.com's RaceBuddy available on smart phones.

The live video with in-car audio will appear on the NASCAR Sprint Cup Mobile service for the final five Chase races. The service comes free with any Sprint Everything data plan. It's painless to use and has a lot of interactive features. Sprint continues to be the title sponsor of NASCAR's top series.

Here are some details from the company:

Accessed by more than 2.5 million unique users in 2010, NASCAR Sprint Cup Mobile is a wireless application that provides unique access into the world of NASCAR at no additional charge to Sprint customers with any data plan on capable devices. To download the application, existing customers can text NASCAR to 7777 (standard rates apply) or visit sprint.com/speed.

This move comes only weeks after the giant glacier of ESPN creaked and moaned and actually moved one inch. The result was a trade of content between Turner and ESPN. Happily, it was NASCAR fans who benefited.

All of this is part of a much bigger technology shift now in progress called "convergence." Click here for a TDP column on this topic from back in January of 2008 when it first arose.

At the time, SPEED was rolling out it's new website that was loaded with all kinds of video access, including a 30 minute weekly Wind Tunnel Extra that has developed almost a cult status. Kevin Annison, SPEED's online guru had even bigger things in mind.

"This is just the beginning in the evolution of SPEEDtv.com and SPEED Interactive," said Annison. "Where the environment is more conducive to broadband vertical initiatives and digital brand extensions for the linear network."

Got all that? There may be a quiz later. Here is an explanation of all this technology stuff from the 2008 TDP column.

Step back for a minute and look at sites like ESPN.com, NASCAR.com and SPEEDtv.com. Think about what they have in common. Look at the direction in which they are going and what they are investing time, money and technology in building. If you squint your eyes, it's easy to see. They all want to be your TV.

While ESPN paid to provide the "finished" television coverage of the Chase races, the desire of many fans is to have more online interactive options available. More camera views from on-track, in-car cameras with audio and live timing and scoring are the most popular discussion topics.

Ultimately, no matter how it is divided, the bottom line is that NASCAR needs the same kind of technological integration as other professional sports. A single TV network feed and a single radio broadcast is simply not going to allow the sport to grow.

One of the biggest complaints since 2007 has been the complete lack of Sprint Cup Series races available for live online viewing. Fans don't care who produces them or whether they contain ads. The desire is to utilize laptop, tablet and smart phone technology to enjoy racing where ever and when ever the consumers want to do it.

This season NASCAR Chairman Brian France and the ESPN public relations department have been promoting the fact that the first five Chase races attracted almost five million viewers each. Here is a point to consider with that in mind.

A recent survey from the Wireless Association concluded that in the last year the number of active smartphones (and PDA's) was over 90 million. There were also 13 million laptops and tablets in use with this category skyrocketing in popularity.

Think how many millions of connected consumers could be "watching" this year's Chase for the Championship if it was made available online. As the laws of "convergence" preach, ultimately we will have multiple devices that can access the same content throughout our day, our lives and the world.

For now, it's just six in-car cameras on a Sprint phone. As a wise man once said, every journey of a thousand miles starts with a single step. As NASCAR fans it may be a single step but our journey is normally half that distance. Here we go.