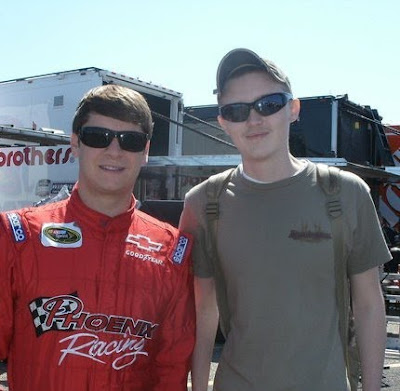 Update: This is a repost of the original story about the person who posted the Kurt Busch video of him upset with the ESPN camera crew and Dr. Jerry Punch. Sunday night, Busch was fired from Penske racing according to the Charlotte Observer's Jim Utter. You can leave updated comments about that topic on this post.

John Adams lived in Braintree, Massachusetts and was the second President of the United States. He was a Harvard graduate. He was also fiercely independent and believed in the freedom of citizens to express their views. "Let us dare to read, think, speak and write," he said.

Jon Adams lives in Hiram, Georgia. He is pictured above on the right standing with driver Landon Cassill. Adams graduated from Hiram High School last year. He likes to hunt, fish, and iRace with his friends. He also believes in the sharing of information just like the former President.

The big difference is that the Mr. Adams from Georgia has a smartphone with a video camera, a YouTube account and a Facebook page. Where former President Adams published his thoughts on paper and distributed his work by hand, the younger Mr. Adams has an instant global audience thanks to modern technology.

Adams recently traveled to Homestead, Florida for the final race of the 2011 Sprint Cup Series. Garage pass in hand, he found himself in the empty Sprint Cup Series garage as the race started. In a defining moment, he listened to his friend Brian Schoenburg who had an idea on what they should do next.

"So I told my buddy Jon Adams, let's go check on Kurt Busch...he might be slightly flustered with how his day went." said Schoenburg on Facebook.

The two walked over to the area of the garage where Busch was waiting. Adams took out his cellphone and began recording video and sound. In one of the most curious cases of the tail wagging the dog in NASCAR TV history, Adams caught the now famous tirade of Busch at ESPN pit reporter Dr. Jerry Punch.

Rather than just take the video home and show his friends, Adams posted it to his YouTube account that is normally filled with his iRacing pursuits. It didn't take long for the less than two-minute video to become viral. Now with over a half-million views, the repercussions of what one NASCAR fan with a cellphone can do are amazing. Click here if you live under a rock.

Here is a note from Busch's NASCAR sponsor: "Shell and Pennzoil are disappointed with recent actions by driver, Kurt Busch, at the final race of the 2011 NASCAR Sprint Cup Series race season. His actions are in no way consistent with the way we want our brands represented and we have expressed our disappointment and concerns directly to Penske Racing."

Here is a note from Kurt Busch: "Unfortunately, our result in the season-ending race at Homestead on Sunday was not what we had hoped for as a team," he said. "In my frustration with the loss of my transmission early in the race, I let my emotions get the better of me. I regret having done this and apologize to the sponsors of Penske Racing, to NASCAR, its fans, to the media and in particular, Dr. Jerry Punch."

The ultimate irony here is that ESPN is famous for putting extensive effort into using both audio and video captured at the Sprint Cup Series tracks to embarrass drivers. Michael Waltrip, Tony Stewart and Dale Earnhardt Jr. are just some of the drivers who have been painted in a bad light on purpose.

Unlike journalists at the track who may have run-ins with NASCAR personalities like Busch during the course of a ten month season, Adams and his friend were not interested in accomplishing anything more than just seeing what was going on. But when they saw Busch's antics, they knew right where to go.

"My f*****g idea cost Kurt $50,000.... I can't believe it, great teamwork dude, haha... If only that money went back into our pockets," said Shoenburg to Adams on Facebook. "Way to go man! Haha, you be famous now for taking down Kurt Busch, I bet he gets more of a penalty than Kyle did," said Facebook friend Justin Fuller.

Click here to review Adams' Facebook page and the support he has for "taking down" a NASCAR driver. Epic, owned and superstar were some of the terms being used by those leaving comments.

All of this points to the ever-changing topic of who really is "the media" these days. Was it Punch with his TV crew or these two Georgia boys with a cell phone? Punch never mentioned the incident on the air and ESPN never showed it. The mainstream NASCAR media picked it up from Twitter fan links.

These days at the track there is one group producing the live TV telecast, another producing the radio coverage and a third covering the event from a news perspective for a variety of online media outlets. That is who NASCAR describes as "the media."

Perhaps, there is a fourth group at the track. The unofficial media arm of the sport are the fans who see and hear things from the time they arrive at the track until they leave and take the time to share them.

With the rapid growth of Twitter, the new ease of posting video on Facebook and the global reach of YouTube it seems that 2012 may see fans empowered to become a greater source of NASCAR news content.

What did you think of Adams posting this video? Do you check YouTube, Facebook or other sources for fan videos from NASCAR racing weekends? Do you upload videos when you attend races? What do you think of ESPN choosing not to report this incident or use the footage? We welcome your opinions on this topic.

To add your comment, just click the comments button below. If you are a new reader, we do not permit profanity, hateful speech or political agendas. Our perspective is simply having conversations about different NASCAR TV and media topics. Thanks for taking the time to stop by.

Here are some TDP columns from year one of the current NASCAR TV contract about online topics for reference. You can use the search button on the upper left side of this page to search for more. If viewing on a smart phone, click web view.

NASCAR Fans Turn To Internet As TV Networks Fail To Deliver (from April 22, 2007)