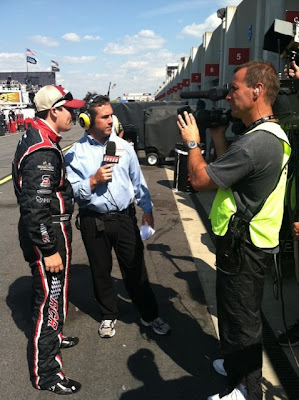 SPEED puts a very familiar product front-and-center to start the All-Star weekend. The Camping World Trucks may have some thin fields, but the TV coverage is solid and the focus is on the racing. This production is so different from both ESPN and FOX that is allows for comparison to both.

Just like the Nationwide Series, the trucks are the playground of the Sprint Cup Series drivers who cross-over and dominate. With some big name truck racers gone this season, it has been a task for SPEED to keep it interesting. The production team has responded by simply covering the racing and nothing more.

Krista Voda starts the coverage with The Setup. A very effective pre-race show that features Voda's corny Midwestern sense of humor and her straightforward delivery. Reporters Ray Dunlap and Hermie Sadler are important parts of the show. Despite the lack of bells and whistles, Voda consistently delivers.

Rick Allen is having a very good year in the truck series booth. He controlled Darrell Waltrip on the air in a recent visit and tonight has his regular team in Phil Parsons and Michael Waltrip. This trio is at its best when Waltrip has his head in the game and is not being cute or pushing sponsors.

Charlotte Motor Speedway is very nice on TV under the lights. The trucks seem to enjoy this track and the story often becomes the tale of two groups. The cross-over drivers are out front racing for fun and the regulars are slugging it out mid-pack for the points championship.

SPEED's veteran truck series production team has what some of NASCAR's other TV partners lack. That is perspective. Rather than leap from car to car like FOX or try to create storylines like ESPN, the relaxed style of SPEED simply allows the viewers at home to be a part of the racing on the track.

Many members of the team including Allen, Waltrip, Sadler and Dunlap are active on Twitter. So are the race producer, director and several production team members. It's interesting to watch them all send out tweets and interact directly with fans during the live telecast.

This post will serve to host your comments on the SPEED coverage of the Camping World Truck Series race from the Charlotte Motor Speedway. To add your TV-related opinion, just click on the comments button below. This is a family-friendly website, please keep that in mind when posting. Thanks for stopping by!

A Moment In The Sun For The Pit Road Gang 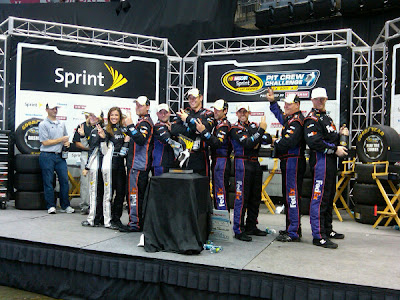 Update: Well, it's all over but the shouting. Denny Hamlin's team wins again and had a great night. The TV pictures and production were super. SPEED's announcers added just the right touch.

The one issue that popped-up was the fact that SPEED carried the show on a one-hour delay. Lots of media, teams and even NASCAR and SPEED all communicated the compitition via social media in real time. That meant that NASCAR fans on Twitter, Facebook, NASCAR.com or other racing media knew the winners well in advance.

Just might be a good idea for SPEED to look at making this a live show in 2012 in order to get a broader audience of fans. We welcome your thoughts on this topic.

Surrounded by the All-Star race and the Hall of Fame induction sits the one opportunity of the year for Sprint Cup Series pit crew members to get their names and faces out on national TV.

Thursday night is the 2011 Sprint Pit Crew Challenge from the Time Warner Cable Arena in Charlotte, NC. The TV coverage begins at 8PM ET on SPEED.

"While it’s about the group of guys, it’s also about individuals and how they perform," said SPEED's Larry McReynolds when talking about the event. "But the end result is about how the team performs and that’s the same thing they face on race day."

"The NASCAR Sprint Pit Crew Challenge has become extremely popular with our fans and with our teams as it provides an opportunity for the real unsung heroes in our sport to be on center stage and showcase their talents and outstanding teamwork," said Robin Pemberton, VP of Competition at NASCAR. "It’s a great lead-in for the week of activities heading into the All-Star Race and it promises to deliver another exceptional experience for the fans and for the competitors."

Here is an overview of what you will be seeing on SPEED from the organizers:

All teams competing in this year’s All-Star Race are eligible to send their over-the-wall gangs to the Challenge. Also eligible is the winner of last year’s Challenge. If more teams are needed to fill out the field of 24 teams, the positions will go to the teams of car owners ranking highest in the 2011 owner standings that are not otherwise eligible.

The new fueling cans and systems, however, will not be used.

The competition is different than a normal pit stop. The crews start at four separate stations. From those stations, the crewmen do their normal duties and then hit a split-timer button. They then have to run to one end of the arena and collectively push their 3,200-pound car across the arena floor to the finish line.

All team members will begin simultaneously at the sound of a starter’s pistol. They will hit a stop button positioned on pit wall as they leave their respective pit box, creating their individual split time.

A victory gives the winning team its choice of pit stalls in the All-Star Race or in the Sprint Showdown qualifying race that precedes it.

This event had a rough start on TV, but now SPEED and the organizers have worked together to create an annual event driven by team rivalries and some colorful personalities. It turns out that there is a lot more to most Sprint Cup Series crew members than meets the eye.

Bob Dillner will be handling the interviews from the floor while Steve Byrnes, Larry McReynolds and Jeff Hammond will call the action. SPEED's two former crew chiefs bring a solid perspective to this competition and the casual style of Byrnes really makes it work on TV.

Click here for a feature from WCNC's Greg Bailey about how this competition has changed over the years and the new breed of athletes involved.

NASCAR officials are the ones in place checking the stops and adding up the penalty points. The pressure is really on and this competition is slowly becoming a nice little TV franchise for SPEED.

We welcome your comments on this topic. To add your opinion before, during or after this program just click on the comments button below. This is a family-friendly website please keep that in mind when posting. Thank you for stopping by The Daly Planet.