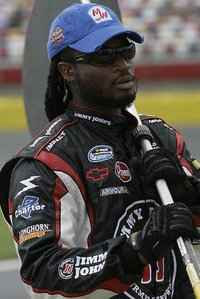 Great racing from Bristol yesterday with the Mods and the Camping World Trucks. Nice to see a good crowd on hand for a Wednesday show. Here are some TV and media notes heading into the racing weekend:

Regan Smith crew member Kenyatta Houston will again be the over the wall crew guy wearing the live camera. Last time Houston was in this role, ESPN's Marty Reid was perhaps a little off-base with a comment. Good move by ESPN to make things right and get Houston some TV time.

On Wednesday, SPEED made it official:

Voda, host of NCWTS Setup, SPEED’s NASCAR Camping World Truck Series pre-race show, will anchor the energetic Friday night program for eight of the remaining 13 NASCAR Sprint Cup Series weekends. Her duties in the Truck Series remain priority, so John Roberts, host of NASCAR RaceDay Built by The Home Depot, will fill in on Trackside for the weekends when the Truck and Cup Series are not companion events to each other.

Voda moved into that role when Steve Byrnes came off the road and joined Race Hub as the fulltime host. This also opened the door for Rick Allen and Mike Joy. Those two will be handling the practice and qualifying sessions for the Nationwide and Sprint Cup Series on SPEED. Allen is first with the shows from BMS this Friday.

I'm not a big fan of the NASCAR Smarts show on SPEED, but this weekend Kyle Petty and Rutledge Wood take on the team of Larry and Brandon McReynolds from the SPEED Stage at BMS. The show airs on Saturday at 4PM ET.

Lots of interest has been spurred by a group that is set to invest millions in building a road course in the Austin, TX area. F-1 has already indicated that the series would come to the US and race at that facility when completed. The head honcho, Tavo Hellmund, is going to be Dave Despain's guest on Wind Tunnel Sunday night at 9PM ET.

Just a friendly reminder that the Saturday night Sprint Cup Series race from BMS is on ABC, not ESPN. Ray Evernham is also going to be joining the usual group in the Infield Studio. That makes 12 on-air announcers for ESPN this weekend.

The new NASCAR race schedules for 2011 are out, we will be updating shortly what changes that means for the TV networks in venues and times. Next season will certainly have a different look in both the Sprint Cup and Nationwide Series.

We will update this post with more info, please check back during the day. In the meantime, please feel free to leave us a comment on the topics above. To add your opinion, just click on the comments button below. This is a family-friendly website, please keep that in mind when posting. Thanks for stopping by.
Posted by Daly Planet Editor at 8:06 AM 13 comments: