NASCAR Journalists On TV: What A Concept 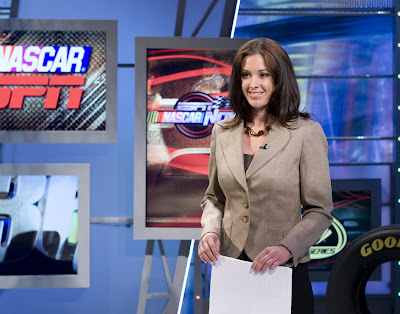 Allen Bestwick again stepped aside as host and Nicole Manske led the panelists in a discussion of a wide variety of topics. Manske has quickly moved her way through the studio host and trackside reporter roles on this TV series and now finds herself hosting the flagship show with high-profile guests.

Nate Ryan from USA Today, ESPN's own Angelique Chengelis and Michael Vega of the Boston Globe know each other quite well from the infield media centers on the circuit and began a good conversation about the sport from the start of the show.

During these off-weeks, the NASCAR Now producers try to keep the journalists in a tight little box when it comes to topics, but it never works. Once again Manske tried to direct traffic, but once conversation begins among journalists it is often inclined to continue for a while.

Unfortunately, just like SportsCenter and the endless array of ESPN studio-based programming, the music blared every time video footage (called B-roll) was added to the show. The high energy highlights-style music and often even the addition of this footage was simply distracting to the good conversation going on between the panelists.

Amid the normal reviews and comments, Chengelis stood-out with her strong comments that often sparked discussion. She called for NASCAR and Goodyear to get together and form an independent tire testing team that can get around the testing ban and focus on solving the problems the tire company is still struggling with this season.

She said some engine problems may be related to teams that have to perform or join those that have fallen by the wayside without sponsors. Ryan advanced the notion that the lack of testing was the key to this year's unexpected engine problems for teams normally known to run well.

Vega was the unknown element and he proved to be a bit unfocused in his comments. Perhaps more used to writing than appearing on TV, Vega spoke in phrases and wandered in his responses between topics. In the TV world, twenty second responses directly to the question being asked is a lesson that is taught over-and-over again.

There is an "old-timers" charity race this weekend in Bristol, TN. Although Darrell Waltrip stepped aside for a Fox Sports function, Harry Gant is racing and joined Manske as a guest by satellite. She handled the entire interview in much the same way that Bestwick excludes the panelists and handles the Monday guests.

Racers are racers, and Gant was clear on the fact that technology had advanced so quickly that he really did not know a lot about the sport at the present moment. Gant agreed that he would be interested in joining a senior tour if one became available. Manske was not at her best in this short interview.

Vega made a great point that NASCAR is still struggling to figure out how to deal with the retired drivers. He backed-up the notion that seeing the legends in cars at select venues would sell tickets for the current series. Chengelis compared the retired NASCAR drivers to the failure of senior tennis. Unable to perform at the level fans are used to seeing and simply not a good idea she stated.

"He will not admit that this was tougher than he thought," said Chengelis about Scott Speed and his Sprint Cup Series struggles. Vega said Speed was talented, but was confronting the reality of the NASCAR grind. During the run of the next three races, there is no doubt the Top 35 story will be repeated many times.

The economy reared its ugly head once again. Chengelis lives in Detroit, MI and was clear in her comments that fans are simply not attending sporting events due to finance issues. Ryan was upset that corporate sponsors were backing out and he pointed to the withdrawal of DuPont's hospitality and Budweiser leaving Kenny Bernstein on the NHRA tour at the end of the season.

Bruton Smith's recent bluster that the final race in Homestead should be moved due to the lack of infrastructure and area interest was discussed. It was Vega who correctly pointed-out that Smith's real agenda was to get both the finale and the Sprint Cup banquet moved to Las Vegas and his track.

With the NASCAR Hall of Fame finishing construction in Charlotte, the only possible move of the end of season function is to the Charlotte Convention Center. That would put the drivers and teams near home without any airfares or hotel bills involved.

Manske closed-out the show with several topics. The panel was split on Kyle or Kurt Busch having the better year. All agreed Casey Mears was overdue and this was a make or break season for him. A little Final Four review ended the festivities and Ryan admitted that he does not watch college hoops.

Every reporter roundtable has been a breath of fresh air and this was no exception. Why Chengelis was on the panel is a good question, as fans see her almost every racing weekend on TV. Ryan and Vega were smart and showed their very different perspectives on the NASCAR topics covered by the show.

Manske is also in a learning curve on this program and sometimes appeared over-matched on the specifics of the sport. As she continues her transition into a full-time ESPN on-air talent, give Manske credit for stepping away from the teleprompter and filling the Bestwick role on this program.

Next week Bestwick returns with Dale Jarrett, Ray Evernham and Andy Petree as his panelists at 5PM Monday on ESPN2.

Thanks again for reading The Daly Planet.
Posted by Daly Planet Editor at 8:00 AM 17 comments: