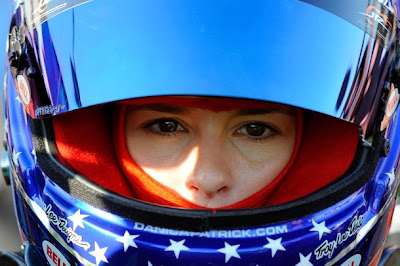 The ESPN boys had all winter to lick their wounds and recover from the thumping they took in the media and with the fans about the TV coverage of both the Nationwide and Sprint Cup Series down the stretch last season.

Now, instead of making changes in the broadcast line-up, the only news is that Rusty Wallace's TV contract has been extended through 2014. That is the current end of ESPN's NASCAR agreement to cover the sport. The fact that Ray Evernham quietly stepped away wasn't even a blip on the radar.

In ESPN's world, everything is always fine. In reality, it certainly is not. Marty Reid struggled with the sport and his play-by-play down the stretch was off-balance. He returns to this role today with the Nationwide Series race from Daytona.

Alongside of Reid are Dale Jarrett and Andy Petree. It should be interesting to see if Jarrett takes this role and expresses his opinion or continues to be just a bit too polite and far too politically correct. Jarrett still has tremendous credibility and he could be the key to returning ESPN to a position of authority in the sport.

Consistency has defined Andy Petree but the faces around him have continually changed. He started with Rusty Wallace alongside, then the next season Jerry Punch left and Reid came aboard. His original producer is gone and this year he again is cast in the role of the third guy in the booth.

Allen Bestwick will lead the Infield Pit Studio group. Wallace and Brad Daugherty are alongside and assuming their normal roles. Wallace gets agitated and intense, while Daugherty speaks in broad and general terms about any topic in the sport. While Bestwick is the best in the business on TV right now, he is surrounded by a less than stellar cast but still makes the best of it.

There really is nothing to say about Tim Brewer and the Tech Garage. He is cast in the role of making guesses about incidents on the track and is often completely incorrect. His updates on the very basics of the sport make fans feel stupid. In his fifth season in this role, it should be interesting to see how he is presented.

Jamie Shiftan is the new ESPN producer. He is popular with the crew, a homegrown production veteran and maintains good relationships with almost everyone in the sport. The reaction when he was named to this position was overwhelmingly positive. Now, it is his turn to make the TV donuts beginning with the biggest race of the Nationwide Series season.

This blog will host your TV-related comments as we watch the pre-race and race coverage from Daytona. To add your opinion, just click on the comments button below. This is a family-friendly website, please keep that in mind when posting. Thank you for taking the time today to stop by The Daly Planet.