Can NASCAR Learn From The Masters? 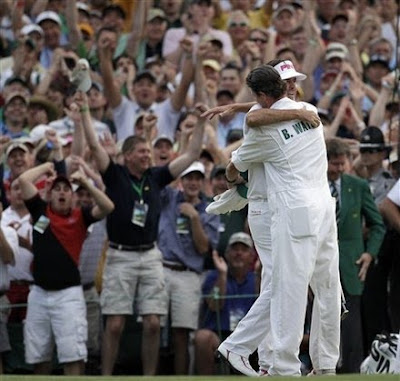 Social media was dominated on Sunday by the saga of the final round of The Masters golf tournament. The stories of the day had been set-up during the three previous rounds of play and ultimately came down to a putt to win on extra holes under darkening skies.

While the story of Bubba Watson's win is a good one, there was another story being discussed on Twitter, Facebook and websites. CBS Sports was again presenting the tournament in a fashion that is rarely seen in today's sports television environment. Across the board, it was a hit.

It's been a rough go this season for the TV surrounding the Sprint Cup Series. Despite a popular champion, an Earnhardt in contention and the spectacle of high speed racing in High Definition there seems to be something missing.

Let's take a look at what CBS Sports did with The Masters and see if NASCAR TV can benefit from some of the fundamentals the network used to cover the tournament.

CBS treated TV viewers as intelligent adults. On-air conversation from analysts, reporters and hosts was informative and focused. The commentary served as a backdrop to the action, allowing the athletes to take center stage.

It was assumed that those watching knew the rules of the game. There was no pandering with explanations of the basics of golf. Any explanation of the rules came in reference to a specific incident that was clearly shown to the viewers.

During the live telecast, it was clear that the analysts had put time and effort into gathering facts about the conditions and specifics of the course that day. As the athletes moved through the holes, the comments from the analysts were specifically directed to the current issues being confronted.

Rarely did the announcers use their own specific experiences to reference the live competition in progress. Instead, issues confronted by the athletes were put in a broader frame of reference. Announcers spoke about general topics like emotion, the mechanics of a golf swing or the specifics of that part of the course.

Pictures selected to present to the TV audience kept a larger frame of reference. Images of play on the holes began with a wide perspective of the challenge ahead and moved tighter as each athlete continued through the field of play. It was easy for viewers to know who was where simply through the images shown on TV.

Tight shots were purposeful and used to drive home a dramatic moment without the loss of meaningful live content. Zooming to a tight shot clearly was meant to indicate to the viewer that something important was happening at that moment. The mix of subsequent replays allowed viewers to then see the larger perspective, including the emotions of the athletes.

Viewers did not get the sense that play was interrupted for commercials, even though that was the case for all commercials presented during play. There was a format in place that allowed for a story to be told in full and then a commercial was inserted before additional action was shown.

The announcers were focused on describing the action and then analyzing what happened. They suggested possible scenarios, watched the athletes play and then explained to viewers what had happened. There was a pattern that made the telecast comfortable to watch.

Regardless of experience level, championship history or nationality all competitors were treated equally. A good performance from a non-championship contender was celebrated equally as those playing for the win.

The agenda of the network was to feature athletes as the show, not promote the announcers as individual personalities. The on-air personalities instead gained credibility through providing effective and accurate commentary on the live action.

At no time were the announcers placed on-camera simply for the purpose of getting TV time. It was clear from the initial set-up at the beginning of the telecast where the on-air personalities were located. The challenge for the announcing team was to remain relevant with commentary alone.

After play concluded, the athletes were asked to provide their own opinions about key moments of their round. The reporters did not reference themselves, second guess decisions made by athletes or suggest reasons events occurred. It was simply up to the athlete to provide a first-person perspective on what viewers had seen earlier during play.

Finally, the winner was treated with respect and allowed to offer comments about topics important to him. The host knew what topics made sense to bring up and avoided those that did not. In the end, viewers were able to get a unique sense of perspective from the winning athlete's point of view.

CBS ultimately acted as a support staff for the athletes and event. Being consistent with graphics, pictures and commentary throughout the day resulted in the feeling that those producing the telecast were just as interested as the viewers in the outcome.

That connection between production team and viewer may be the best lesson of all. By simply letting the athletes perform under pressure, documenting their efforts and working hard to keep viewers informed the CBS team used a simple equation with big success.

Can NASCAR learn from The Masters? The Sprint Cup Series season resumes this weekend at the Texas Motor Speedway and runs for 14 straight weekends before taking a break. With the CBS production fresh in our minds, it should be interesting to see how fans react this weekend when the green flag drops.