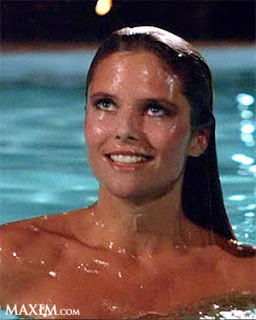 Maybe the connection to the movie is just too strong. Maybe it's fact that many years have passed since "National Lampoon's Vacation" was originally released.

Or, maybe it's simply the fact that the same commercial is being pounded unmercilessly into the NASCAR TV viewers' brains to the point of insanity.

TDP emailers have suggested everything from an online petition to a march on the DirecTV headquarters. For some reason, DirecTV has ended the rotation of its themed commercials and has endlessly hammered NASCAR fans with Christie Brinkley as "the red Ferrari girl" in the swimming pool for the past several weeks.

While DirecTV certainly is trying hard to sell NASCAR fans home satellite dish service, there has to be a point in time where even the most entry-level advertising executive recognizes that enough is enough. This is that point.

It is always nice to see Chevy Chase on the screen, but how many times can you watch a guy take his pants off and jump in a pool? Chase is now 65 years old and Brinkley is in her mid-50's. The idea for the commercial was great and that is exactly why it is such a shame that it is now the most annoying NASCAR TV commercial or promo in history.

There has been a lot of competition in that category over the last two seasons. Smiling Bob and his permanent Enzyte grin were running neck-and-neck with TNT's The Closer and Saving Grace. Just so fans can begin gearing-up for next season, all new episodes of Saving Grace start on TNT in March so the series can be in full-swing by the time that NASCAR returns to that network.

Over the next six days there will be one of the heaviest loads of NASCAR TV programming ever produced by the NASCAR TV partners. ESPN2, SPEED, ESPN Classic and ABC will combine to offer over 40 hours of on and off-track programs. There is no doubt that the push to sell home satellite service to NASCAR fans will be in full swing.

So, perhaps the DirecTV executives might take pity on the fans over the next week and offer some other commercial spots before Brinkley and Chase turn into the "Rocky Horror Picture Show" of NASCAR.

The Daly Planet welcomes comments from readers. Simply click on the COMMENTS button below and follow the easy instructions. The rules for posting are located on the right side of the main page. Thanks for stopping by.
Posted by Daly Planet Editor at 10:00 PM 60 comments:

The Day After The "Big Switch" 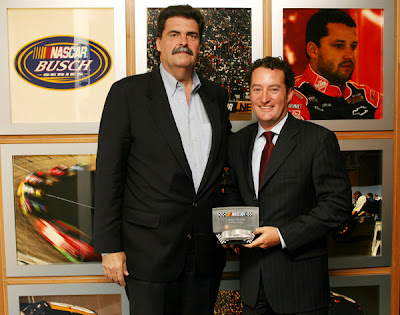 "After two red flags, rain in Phoenix and 4 1/2 hours on ABC, we were still 34 minutes from the end of the telecast as it turned out. We told fans in the East and Central from the second red flag on that the race was moving to ESPN2. ABC's entertainment viewers and NASCAR fans were both well served in a tough spot, and we are fortunate to have ESPN2 among our networks to serve the fans." (ESPN)

So, the day after "the big switch" the issue is being used across the board by journalists and media folks to blame ABC and ESPN for a whole lot of frustration over the last seventeen races.

Let's step aside from the production and announcing issues that TDP talks about a lot and focus on exactly what all the yelling is about. Those are two good statements above about what was on the ABC/ESPN priority list Sunday night.

This is only the second season of the new TV contract between ESPN and NASCAR. During the first year, when ESPN began to produce the races on ABC there were a lot of problems. Local stations on the West Coast did not show the pre-race because it conflicted with the children's programming timeblock. ABC stations on the East Coast and in the Central Time Zone left races that were in-progress to start their own local news on time. It was a mess.

Now, ESPN wades back into the second season and finds itself a victim of a problem discussed here for the last eighteen months. Scheduling. NASCAR and ESPN started the Phoenix race at a time that they both decided was correct. NASCAR knew full well that this live event was heading straight toward a brick wall. That wall is called primetime.

Let's get the record straight. This has nothing to do with the content of the programming on ABC. There were lots of jokes and quotes in the media about America's Funniest Home Videos. That is taking the easy way out and avoiding the real issue.

NASCAR has a Vice President that is fully in charge of making plans for every single Sprint Cup Series race on TV. Each race is a property that is worth tens of millions of dollars in rights fees. This Vice President is tasked with serving the interests of the sanctioning body by dealing directly with the NASCAR TV partners. His name is Robbie Weiss. That is Mr. Weiss pictured above with Mike Helton.

Over the season, we have seen a wide variety of broadcast issues associated with the three NASCAR touring series. Sunday night, we saw another. Long before the first hauler pulled into Phoenix and months before the NASCAR Chase for the Championship began, it was NASCAR's responsibility to make sure the pieces of the TV puzzle fit.

To simply throw stones at ABC and ESPN makes no sense. ESPN does thousands of live events on a multitude of TV networks over the course of just one year. This is nothing new to them. It was not a surprise. To pretend it was a surprise to NASCAR is also ridiculous.

Just last month, Mr. Weiss brokered a deal to allow the ESPN coverage of the Memphis Nationwide Series race to be shown on SPEED as a simulcast. Due to a long-standing scheduling conflict, the race was headed to the ESPN Classic network for airing. Weiss stepped-in and solved the problem.

Until we hear from Mr. Weiss about the situation on Sunday night we can only offer educated guesses about who knew what and when. Where multi-million dollar sports properties are concerned, you can bet that normally all the TV ground rules are spelled-out well in advance. It would be an important part of his job to have that done for all the Sprint Cup Series events.

Let's look at this analytically. Who was eliminated when the switch from ABC to ESPN2 happened? It was those viewers in the Eastern and Central Time Zone watching ABC without cable TV access. ESPN2 is a basic cable network, so most NASCAR fans simply had to switch one time to another channel.

There are no winners in the "network swap" game. We saw that earlier this season when the best-made plans of Fox Sports turned a baseball game and a NASCAR race into a complete on-air disaster. Live sporting events like NASCAR that run without a clock or any kind of time limit are the most difficult to handle.

Monday afternoon at 3:40PM Eastern Time I will be talking with Dave Moody on Sirius Speedway and addressing this issue. Tune-in if you can and I will update this post as to what we discussed and any news that come along.

In the meantime, we can use this post to address "the big switch" and see what really is the issue behind all the fan anger. To add your comment to this post, just click on the COMMENTS button below and follow the easy instructions. The rules for posting are located on the right side of the main page. Thanks for taking the time to stop by.
Posted by Daly Planet Editor at 10:08 AM 96 comments: