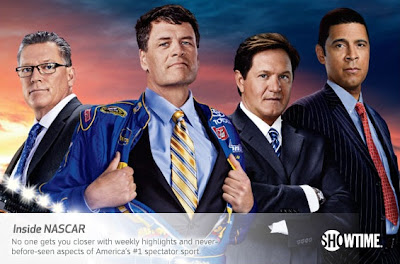 It was January of 2010 during the Charlotte Media tour when Michael Waltrip ramped-up the drama a bit before confirming that he was going to join Showtime's new sports TV series called Inside NASCAR.

Waltrip's previous run on a NASCAR talk-show had been pretty impressive. The Monday night show on SPEED had various titles, but always presented an hour of original content and discussion about the sport that had been missing from TV on weekdays. After more than a decade on the air, the network had cancelled the latest version in 2009.

Despite only having about 17 million total pay subscribers, Showtime jumped into NASCAR with both feet. Major cable sports TV networks have over 80 million subscribers, but Showtime wanted to get into the NASCAR business. The sport's own NASCAR Media Group would provide the studio and production for the Charlotte-based show, but there was going to be an even bigger twist.

After years of struggling with Internet, cell phone and Video on Demand issues, Inside NASCAR was going to kick open the door to shared NASCAR TV programming.

This from Sports Business Journal reporter Michael Smith in late January of 2010 updating the original announcement:

"Showtime's new weekly Inside NASCAR show will be available via the Internet and mobile phone, which required clearance from NASCAR's rights holders in that space," reported Smith.

"The NASCAR Media Group, which manages those multimedia rights, had to clear the broadcast of Inside NASCAR with its TV, web and mobile partners before giving final approval for the new show."

Finally, a NASCAR TV series that could skip across all kinds of online and mobile platforms and get directly to the fans. In addition, Showtime said the series would be made available on the Showtime Video On Demand (VOD) channels on cable systems. Any way you sliced it, this was groundbreaking television.

It made sense, showing this program first to Showtime subscribers on Wednesday nights, then making it available to NASCAR fans via non-traditional platforms for distribution. What a great way to introduce Showtime to potentially new subscribers.

Unfortunately, it didn't take long for something to smell a little fishy. On January 26 of 2010, Showtime answered some questions about the new series. Their answers sounded very different from the original press release put out by NASCAR.

"Showtime Throws NASCAR A Curveball" was the TDP column that followed. Click on the title to read the column.

Via email, a Showtime rep commented on three key topics. First, the series would not be made available via mobile phones. Second, the reason for that was none of the content on Showtime was available by mobile phone. Finally, the only content posted on the Internet would be "teases" of the show. In reality, the only way to see Inside NASCAR was to subscribe to Showtime.

Despite these puzzling developments, the first season of Inside NASCAR went into production. The Wednesday night shows were played to the small number of Showtime subscribers nationwide who cared to watch sports.

After only one season of producing a high-end weekly hour of NASCAR TV, the network sliced the program to thirty minutes in 2011. It was clear that the return on the significant financial investment needed to produce this caliber of show was not working.

Last night, Showtime aired a one hour special Inside NASCAR focusing on the Daytona 500. This was the kick-off episode of season three. Showtime's PR release talked about the wonderful Daytona 500 and promoted exclusive scanner audio of Juan Montoya right before his fiery accident. But there were also some other words in the release.

"Regular weekly episodes will return in early September, the week before the final Race to the Chase event at Richmond International Speedway."

After only two full seasons, Showtime has suspended the Inside NASCAR show with a promise to return in six months. This is the same company that promised mobile phone distribution, Internet streaming and VOD availability of the very same product.

If Showtime decides to opt out completely after this season, the possibility exists that the NASCAR Media Group could shop this series to a national cable sports network. Currently, the NBC Cable Sports Network (the former VERSUS), the new CBS Sports Network (formerly CBS College Sports Net) and Discovery's Velocity network are actively seeking sports programming.

In the meantime, NASCAR fans who took the original advice of Showtime and subscribed to the service to see Inside NASCAR on Wednesdays in racing season are left in a lurch. This year, Showtime is one and done with NASCAR and has posted a "We will return in September" sign on the door.

Unfortunately, the network's track record of fulfilling promises where NASCAR fans are concerned is a little bit short of satisfactory.