SPEED Makes A Statement In Darlington 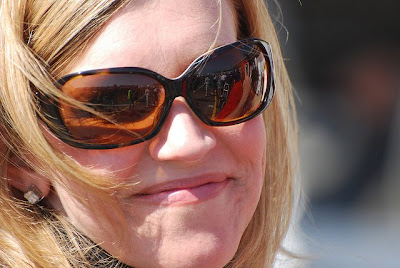 This is year five of anger and frustration with the Sprint Cup and Nationwide Series television coverage.

This year, NASCAR on FOX has decided to only show the winning car finish the Sprint Cup Series races. The sheer arrogance of FOX in terms of selecting pictures to simply show a race to fans on TV is off the chart. Sunday afternoon, FOX will present a review show of the Daytona 500. Replaying video of what actually happened is something the NASCAR on FOX production team knows how to do very well.

Over at ESPN, Marty Reid is lost. He is not just a little bit lost, he is off the beaten path and looking for a way out. Reid does not know the history of NASCAR and that lack of perspective has crushed him in terms of credibility and on-air comments. Meanwhile, Allen Bestwick continues to quietly try to steer the ESPN ship from the infield.

Since 2007 there have been hundreds of posts and many thousands of comments on TDP about the struggles of FOX and ESPN. From the screaming favoritism of Darrell Waltrip to the decimation of the Nationwide Series when ESPN's college football starts, it's been a TV mess.

Meanwhile, hardcore fans have found a fix. Quietly carving a niche on the TV landscape is SPEED's coverage of the Camping World Truck Series. The network's own production team handles the producing, directing and announcing. When Darrell Waltrip was loaned to SPEED at Daytona he promptly returned the favor by screaming overtop of announcer Rick Allen on the closing lap. Truck series fans noticed.

The theory of racing TV is to show up, introduce the participants and let them race. While FOX now has two pre-race sets including the Hollywood Hotel, SPEED has none. While ESPN uses three or four announcers strictly for the pre-race show, SPEED uses one. The winner of the pre-race show sweepstakes is SPEED.

Host Krista Voda has offered a consistent and informed pre-race show for years. Standing alone, Voda walks viewers through the topics in the news, then shows a feature and sets up the field. It's simple, straightforward and effective.

Here is a comment from a TDP reader on the Las Vegas race coverage from FOX:

As a fan of the sport, it is painful to watch it presented like garbage. FOX presented this race like a practice session, hopping from car to car to tell a story and move on. Tight shots and in-car cameras robbed viewers from experiencing many race changing events live. FOX had to resort to replay again and again. I changed the channel about a third of the way through. When I turned the race back on with 15 to go, nothing changed. FOX showed Edwards win and blew off the rest of the field.

Saturday afternoon SPEED telecast a one-day stand-alone show by the truck series from Darlington, SC. One hour of qualifying was followed by the thirty minute pre-race show and then the race. Once again, it was a step back to what racing used to be on TV.

The network had Rick Allen, Phil Parsons and Larry McReynolds in the booth. McReynolds was subbing for Michael Waltrip. Voda handled the pre-race show while Hermie Sadler and Ray Dunlap were the only two pit road reporters.

SPEED has understood for some time now that just telling the stories and letting the viewers judge is the ticket. Instead of cherry-picking the top drivers like ESPN or forcing agendas on fans like FOX, SPEED treats drivers equally on the air. It's a concept that has clicked with fans.

At Darlington, wideshots from the director were used to show the relationships on the track between trucks. Establishing that perspective is key to understanding the actual race. Then, the stories of a fuel run or time between cautions can be told. Without taking the time to let the field sort-out, jumping to a close-up ends any sense of what is actually happening in the race for the viewer.

Here is a fan comment about SPEED with the Darlington race in progress:

It's so refreshing to be treated like an intelligent fan by this booth tonight. These guys have brought their "A" game and I'm enjoying it.

Allen, Parsons and McReynolds took turns speaking, respected each other and wound up presenting an outstanding telecast. Excitement from Allen blended with the driver perspective from Parsons and the crew chief comments from McReynolds. From beginning to end, these three worked without an embarrassing moment.

Despite many accidents, cautions and even a red flag there was no problem with information from pit road. Sadler and Dunlap chased the stories, grabbed the drivers out of the race and followed-up on topics raised by the TV booth. In the post-race show, the two reporters put out a ton of information and talked to the key drivers.

Both FOX and ESPN have four pit reporters. The issue isn't their ability to get to the story, it's the problem with funneling that story through to the air. ESPN's Nationwide Series agenda has classically been driven by interviewing and featuring Sprint Cup Series drivers. FOX's broadcast network time crunch often collides with Waltrip's desire to have the last word.

SPEED has perfected the art of enabling others to take center stage. Over the years in the truck series post-race it has been drivers, crew chiefs and owners emotionally telling viewers what the race meant to them. SPEED has used the microphone and camera as they are intended, to relay what is actually happening and not interfere.

Here are just two of many comments from TDP readers after the Darlington race telecast was over:

Perfect coverage. Anyone who does not understand the complaints many members here have with the FOX & ESPN coverage needs to see this race. The flow of the coverage was smooth and relaxed. The camera did not have to jump from truck to truck. The director found the racing, saw when there was about to be trouble. The reports and commentary were informative, not dumbed-down lectures. We all got to see the entire field rush to the finish line, bouncing off the wall and each other. Great job by everyone at SPEED!

Entertaining race, informative coverage. Worth the while when production team knows their job and gets it done, such a pleasant way to enjoy a broadcast.

It was back in July of 2007 that TDP featured a column titled "Craftsman Trucks On SPEED Are The Best Show In Town." Even then, we focused on the professional tone set by Voda, the fairness to all the competitors and the open style of the directing.

Both ESPN and FOX are heading to Bristol, TN. After an off-week, the opportunity to continue the momentum of the sport is going to be in the hands of these two TV networks. Bristol is a track where good directing is key, words chosen by announcers must be brief and action happens without warning.

After SPEED's performance in Darlington with the trucks, this season's benchmark for professionalism and production has been set. It should be interesting to watch how ESPN and FOX respond to that challenge.