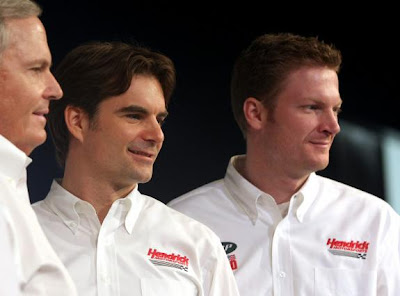 Update: Monday night just before 8PM, SPEED's Randy Pemberton announced that SPEED will be carrying the NASCAR press conference from the Charlotte Media Tour live. Unofficial information sets the telecast for Thursday at 1PM ET. We will confirm this ASAP.

NASCAR staggers into 2010 still bearing the scars from a rough ending to the previous year. During the off-season, the sport made wholesale changes in an effort to return the Sprint Cup Series to national prominence.

There are four TV networks that televise the practice, qualifying and race action during the year. Two of those networks, ESPN and SPEED, offer daily news programs about the sport. NASCAR Now is seen six days a week on ESPN2 and Race Hub is aired Monday through Thursday on SPEED.

NASCAR Now airs at 5PM ET, before ESPN2's primetime line-up gets clogged with live sports coverage. The network also tries to re-air the program after midnight for the West Coast audience. "Tries" is the operative word in that sentence.

SPEED added Race Hub into the mix late last year, seemingly from nowhere. There was no build-up, no hype and little planning. Whatever happened at the network caused a ton of resources to immediately be allocated to what was a long forgotten cause, NASCAR news during the weekdays.

Having two daily NASCAR news programs on TV is going to be great for the fans in 2010. NASCAR Now in the early timeslot will focus on using its own reporters to deliver updates on the sport and mix interviews with pre-produced features.

Race Hub is designed to host NASCAR personalities live in the Charlotte, NC studios of SPEED. The mix between the buttoned-up style of ESPN and the casual style of SPEED should be fun to watch.

This week, writers and reporters from across the nation make the annual trip to the Concord, NC area. The Charlotte Motor Speedway hosts a media tour that provides coordinated visits to team shops and NASCAR locations during a four day media blitz that begins on Monday.

This is the time when the teams offer new information and answer questions. Drivers, crew chiefs and owners have media conversations that set the tone for the season. NASCAR itself hosts the media at the Research and Development Center and usually announces updates and changes during this function.

There is also a stop at the NASCAR Hall of Fame to update the progress of that immense facility scheduled to open later this year. A visit to the SPEED studios was not on any published agenda that I received. That is not a good thing.

Unlike past seasons where the power of the NASCAR media was firmly rooted in print publications and their online websites, the tide has changed with the recent demise of NASCAR Scene. Many veteran reporters were fired in a one day event that changed the face of the NASCAR media.

In a rather de facto manner, television is about to become the leader in putting the NASCAR headlines front and center for the fans. Then, fans can go and search for those same topics online. With hundreds of various NASCAR websites around and the number growing, the two NASCAR TV news programs are going to be a guiding light for fans.

Monday, there will be no NASCAR Now on ESPN2. The series is not scheduled to begin until February 1 this year. The information from the media tour will try to push its way onto ESPNEWS and perhaps SportsCenter. Amid the NFL playoffs, NASCAR is not even a blip on the ESPN radar. Best of luck.

That leaves SPEED to carry the NASCAR banner and it will start the week strong with Race Hub on Monday at 7:30PM. Hosts Adam Alexander and Randy Pemberton will welcome NASCAR President Mike Helton. What a great way to kick-off four days of live media tour coverage. Unfortunately, that is not going to be the case.

The Tuesday, Wednesday and Thursday editions of Race Hub are being preempted by the Barrett-Jackson auto auction from Arizona. After only being back on the air for one week, Race Hub is done after the Monday show. The next live news program on the network is The SPEED Report on Sunday evening.

The auction coverage begins at 7PM each night, so SPEED made a choice not to move Race Hub up by one hour and air it at 6:30PM on those three mid-week days. Airing in the 6 to 7PM timeslot are re-airs of "lifestyle programs." Race Hub returns on Monday, January 25.

Ironically, after all the chaos in the NASCAR media during the off-season, getting the pre-season message out during this big week will once again come down to the remaining members of the NASCAR press corps. Unfortunately, both of NASCAR's national TV news shows are off the air for very different reasons.

We welcome your comments on this topic. To add your opinion, just click on the comments button below. This is a family-friendly website, please keep that in mind when posting. Comments may be moderated prior to posting. Thank you for stopping by.
Posted by Daly Planet Editor at 8:00 AM 37 comments: