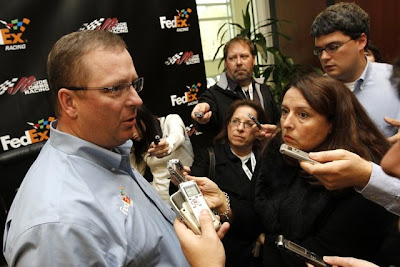 Denny Hamlin's crew chief was on the Thursday edition of SPEED's Race Hub program. Mike Ford was being interviewed by reporter Danielle Trotta when she brought up a sore subject.

John Nevins is a NASCAR fan from Daytona Beach, FL. Under the name Captain Thunder, Nevins produces the CaptainThunderRacing.com website and several other NASCAR-related projects.

Here is part of the story published on that topic:

Sources confirmed to Captain Thunder Racing.com that a crew chief swap has been discussed and is imminent between the #11 and #20 teams. The swap would send Denny Hamlin's crew chief Mike Ford to the #20 garage, and Logano's crew chief Greg Zippadelli to the #11 garage.

Zippadelli, once the crew chief for two-time Sprint Cup champion Tony Stewart, will bring the championship experience to the #11 team that JGR feels Hamlin needs at this point in his career.

The very next day, a spokesman for Joe Gibbs Racing quickly denied that this story was true. The interesting part wasn't that he denied it. It was that the mainstream NASCAR media was using the Nevins story as the source for asking the question.

The response from Nevins was also swift. This on Friday, April 29:

We stand by our story - if both teams do not improve quickly, a change will be made. According to our sources, that decision has been made by Joe and J.D. Gibbs.

Ultimately, it was JD Gibbs who was sitting beside Kyle Busch in the Richmond Infield Media Ceter on the following Saturday night. Busch had won the race. Hamlin was second. Gibbs was once again asked about the Nevins story.

Yeah, you know, it was frustrating in a way. At times kind of comical. I think the website was Captain Thunder. I didn't know that website. C'mon, (if you) listen to that for your information, we're in trouble.

It was nice to put it to bed. Our guys did get a kick out of it. It's one of those things that when you're running not as well as you're used to, people are used to seeing you up front, they start asking questions, leap to crazy conclusions.

During the early part of this week, Gibbs also made the NASCAR TV rounds and used the interview opportunities to confirm that there had never been a discussion, even among JGR senior management, of swapping the Logano and Hamlin crew chiefs.

Thursday, it was Ford's turn to address the topic. His words bring-up a growing debate among hardcore fans. The question is, just who these days is a NASCAR media member?

"I feel like the (NASCAR) media has an obligation to report the truth," Ford told Trotta. "You get a guy who reports a non-truth. I think the media ought to bring him to the forefront so that others don't do that in the future."

Ford's words are interesting. On one hand, he sees a blog like CaptainThunderRacing.com as a member of the NASCAR media. On the other, he wants the "old guard" mainstream media to expose his verson of reality. That is that Nevins simply made the entire story up.

On the same Race Hub show as the Ford interview, Jeff Burton cooked burgers on the lawn of the SPEED studios, Jimmy Spencer delivered his weekly rant in a sombrero for Cinco de Mayo and Hermie Sadler said cooler temps at Darlington will make it more comfortable for fans in the stands. It's not rocket science.

What is upsetting to many is that Nevins seems to be using this type of innuendo as a promotional tool for his website. The parties mentioned by Nevins as the ones making the potential crew chief swap said it never happened. Meanwhile, Nevins continues to fish for new fans on his website, Facebook and Twitter pages by using the denials from JGR as his own red badge of courage.

Where do you draw the line? Should an amateur blogger's story using mystery sources and innuendo send the mainstream NASCAR media running to cover it like breaking news? Was the mainstream media used? In journalism terms, that is called the tail wagging the dog.

That expression is used when suddenly the parts of an equation thought to be the least important become the most important. Suddenly, veteran NASCAR reporters are asking questions based on a report from a website created by a fan. It kind of makes one wonder what this weekend holds in Captain Thunder land?

To add your opinion on this topic, just click the comments button below. This is a family-friendly website, please keep that in mind when posting. Thanks for taking the time to stop by. 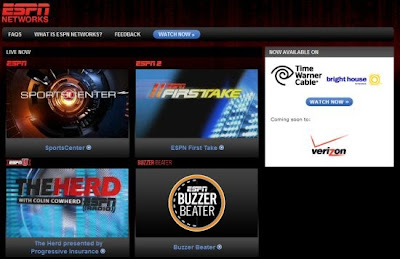 Since 2007, the Sprint Cup Series has split the TV package of points races between three partners. FOX starts the year, TNT steps-in for the summer and ESPN brings the season to a close.

The ESPN portion begins in Indianapolis with the Brickyard 400 in July and continues through late November. It features the final seventeen races of the season, including the Chase for the Championship.

Originally featuring ABC as the primary outlet, the package has switched to ESPN. The cable network now offers over 100 million homes, added flexibility and the reality of not dealing with local ABC TV stations spread across four time zones.

On April 25 we published a column titled "NASCAR Online Showdown Looming." We already know that TNT will offer RaceBuddy once again this summer and "wide open" coverage of the Daytona race in July. Every TNT race will have a live online presence available to NASCAR fans via the Internet at no additional charge.

The Internet showdown was supposed to begin this season at the Brickyard 400. ESPN now has the ESPNNetworks.com website and the WatchESPN app up and running. The idea is to supply cable TV viewers who pay for ESPN with access to that network via the Internet.

The theory is that subscribers have already paid for ESPN. Why shouldn't that product be available when the subscriber is away from the TV set? As you can see from the picture above of the ESPNNetworks.com homepage, the companies currently involved in this project are Time Warner, Bright House and Verizon FiOS.

This approach may work well for most sports, but not for NASCAR. The online rights to all NASCAR footage, including live races, are the property of Turner Sports. That deal was done separately from the TV rights negotiations that resulted in ESPN getting the seventeen races. The problem is obvious.

The very moment that ESPN streams the Brickyard 400 to its own cable subscribers, Turner's online rights kick-in and it can offer an online feed of the same race. It really is a technology-driven NASCAR stand-off.

Rather than draw out the issue, ESPN responded through a spokesman in very clear language. The bottom line is that ESPN will blackout all Sprint Cup Series races on ESPNNetworks.com this season. Since the WatchESPN app is an extension of that website, there will be no NASCAR on iPads and portable devices as well.

That makes the Internet dark for the final seventeen races this year. No online streaming of the races from Turner through NASCAR.com and no free streaming for ESPN subscribers through the company's various outlets. Needless to say, that also seems to close the door on any hope of Turner partnering with ESPN and at least offering RaceBuddy.

Understandably, there are two very different views on this topic. Turner paid for and owns online rights that it feels it cannot use. ESPN is frustrated by the fact that subscribers must use a TV set to view the races when online technology is readily available.

ESPN spokesman: "ESPN will continue to do so (blackout NASCAR online) unless we can reach an acceptable agreement with NASCAR that would allow us to keep our product exclusively on our platforms."

Turner spokesman: "We continue to talk to both NASCAR and ESPN about making more NASCAR content available to fans across all digital platforms…not only mobile, but broadband as well."

Although both sides stress they are still talking with NASCAR about these issues, there really does not seem to be a working solution heading to the surface of this dark and murky lake of online sports rights.

So, it looks like only six of thirty-six Sprint Cup Series points races will have any live Internet presence. Those are the six produced by the sister TV network (TNT) of the online rights holder.

It's hard to imagine how NASCAR fell this far behind the technology curve. The current TV and online contracts run until 2014. In TV time that is only a blip on the radar, but where Internet and mobile technology are concerned, that is several lifetimes.

It would be a very different sport if online video of live Sprint Cup Series races was available for smart phones, tablets and computers. Rather than dilute the television audience, the reality is that online viewers are in a situation where a device other than the TV is the only way to view the event. The theory that NASCAR fans will turn off the TV to view a race on an iPad, laptop or smart phone is ridiculous.

What's really holding up this simple next step in exposing the sport is money. NASCAR has already cashed the check from the current rights deal. Turner wants money back for any use of the online rights it purchased. Finally, ESPN is not going to open the wallet for product it already owns and feels it should be able to distribute online to paid subscribers.

In looking at other top-notch professional sports leagues in North America, NASCAR is the only one that does not make the playoff portion of the season available online. Make your plans now to get to a TV for the Chase for the Championship, you won't be able to see it any other way.